Home » TV & Movies » ‘Like a Boss’ Review: Even Tiffany Haddish Can’t Save This Senseless Friendship Comedy

‘Like a Boss’ Review: Even Tiffany Haddish Can’t Save This Senseless Friendship Comedy

Ah, women, that misunderstood demographic — what do they want anyway? In its mad and misguided scramble to appeal to female audiences, Hollywood is unsurprisingly seriously lacking inspiration. Gone are the days when a writer could simply give the leading lady a consummate bachelor to reform, throw in a career-making magazine assignment or traumatic brain injury, and let the games begin. These days, the decision-making men know it can’t be all about love, and the trend has shifted to another slightly less insulting but just as generic topic: Female friendship. While this worked for genuinely funny hits like “Bridesmaids” and “Girls Trip,” which put comedy front and center, their countless copy-cats, such as “Rough Night,” “Ocean’s Eight,” and “The Hustle,” have landed with a thud.

Unfortunately, despite an enticing cast and a highbrow director, “Like a Boss” falls easily into the latter camp. Starring Tiffany Haddish and Rose Byrne as best friends running a cosmetics business together, the movie’s internal logic barely holds together, and it’s not funny enough to get a pass for a half-baked plot and squandered talent. Haddish does most of the heavy lifting, enhancing the tepid script with her signature blue humor. But without much of a plot to work within, she’s dancing on her own, and even Byrne’s white girl dance moves can’t save her. If “Like a Boss” is all about women having each other’s backs, the actresses either didn’t get the memo or threw in the towel as soon as they read the script.

Haddish and Byrne play Mia and Mel, it doesn’t really matter which is which, childhood best friends whose make-up line is hemorrhaging money. While their other friends (Natasha Rothwell, Jessica St. Clair, and Ari Graynor) are throwing fancy baby showers in their McMansions, Mia and Mel still live together and drive the same beat-up car. Their business is their baby, they insist, and nothing will ever come between their friendship. 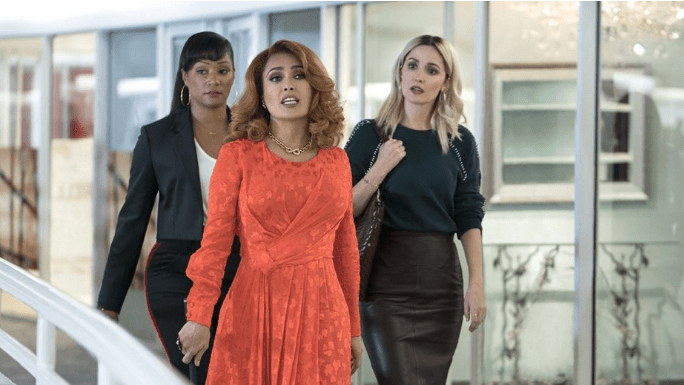 That is, until cosmetics mogul Claire Luna (Salma Hayek) decides to become an investor in their little floundering company. She’s styled like some sort of pint-sized mash-up of Donald and Melania Trump, with an orange lace-front and dental implants, an inexplicable combination only Hayek could pull off. She offers the friends a tempting business proposition, the details of which are central to the plot but entirely glossed over. Since Claire will own a controlling stake if one of the original partners quits, she makes it her mission to break up Mia and Mel’s friendship.

As the creative genius, Mia is far less enticed by the offer than Mel, who runs the business side. Thus Claire begins to wriggle her wedge, via shiny gold golf club, between the two friends. But the writers struggle to wring drama, much less comedy, from even such broad character differences. The conflicts don’t escalate so much as pop up here and there; starting with Mia’s reservations, Mel saying they need money, and Mia acquiescing. The gross-out escapades that seem to pass muster for comedy these days — accidentally smoking in front of a baby, wrestling with a drone, and a ghost pepper debacle — feel engineered by committee, one that used its slightly better ideas on the last generic comedy.

It comes as no surprise that such thinly sketched women characters were written by two men, whose only previous writing credit is one episode of “Ryan Hansen Solves Crimes on Television.” Story credit goes to TV producer Danielle Sanchez-Witzel (“New Girl,” “The Carmichael Show”), whom one can only assume had higher hopes for her idea.

But of all the talent squandered in such inane fare (god bless Billy Porter and Jennifer Coolidge), the oddest one of all is the director: Miguel Arteta. Arteta is best known for indie comedies like “Youth in Revolt,” “Beatriz at Dinner,” and “Duck Butter,” all of which grounded their humor in ambitious social commentary. Why he tried his hand at studio fare with an almost comically apolitical script is baffling, though it may have had something to do with Hayek, who starred in “Beatriz at Dinner.” “Like a Boss” may preach friendship above all else, but sitting through it together would test even the strongest of ties.