The Dragons’ Den star’s podcast featured Hancock opening up about allegations he had broken his own social distancing rules when his affair with advisor Gina Coledangelo was leaked in 2021.

The Conservative MP for West Suffolk stepped down from the front bench in June last year after leaked CCTV showed the then-married Hancock embracing and kissing Coledangelo, who was also married, in his office, at a time when social distancing rules were in place forbidding such contact.

Addressing the long-awaited podcast, Lorraine said: ‘I don’t know what he has come as, he looks like some sort of Bond villain or a pound shop milk tray man maybe.

‘You remember, he was caught on CCTV groping his advisor.’

Coledangelo was also present at the recording of the podcast, with Hancock defending their actions last summer, telling the host: ‘We fell in love.’

Lorraine bluntly dismissed this excuse though, adding: ‘Lots of people who were in love with each other weren’t able to see each other during that time, were they?’ 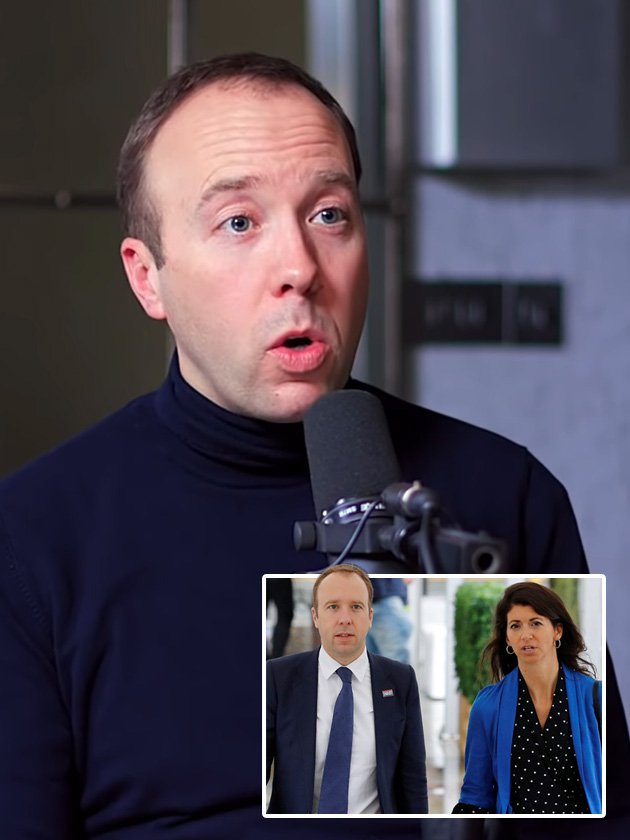 Bartlett had previously described the podcast as ‘heated’ in parts, which included Hancock being grilled on his sudden exit from the cabinet.

Speaking to Bartlett, Hancock said: ‘I resigned because I broke the social distancing guidelines, by then they weren’t actually rules, they weren’t the law, but that’s not the point, the point is they had been the guidelines I had been proposing.

‘And that happened because I fell in love with somebody.

‘We spent a lot of time together, ironically trying to get me to be able to communicate in a more emotionally intelligent way, and we fell in love.’

He added: ‘That is something that was completely outside of my control and I of course regret the pain that that’s caused and the very very very public nature… anybody who has been through this knows how difficult it is, how painful it is, doing that in public is incredibly painful.’

He also admitted that the hardest thing about the public controversy was worrying about his three children, and revealed neither him nor his Cabinet colleagues were aware of the CCTV camera, and did not know how the footage was leaked.

Amid criticism of Hancock’s appearance on the podcast, in part owing to the fact he’s not a CEO, Bartlett insisted it’s up to the audience whether they listen or not and that most of his guests aren’t CEOs, despite the podcast’s title.

Flagging the episode, Bartlett began on Monday: ‘This is the first long-form interview @MattHancock has given since resigning as Health Secretary. You’re going to get a look behind the scenes, hear the context & find out the truth.

‘It’s then up to you to decide what you take from the conversation.’

Lorraine airs weekdays from 9am on ITV.