Inside Line: Scoop on Titans, Virgin River and More

What’s the prognosis for New Amsterdam‘s Helen? Which #OneChicago fella just might cop a love interest? Is Stargirl‘s future bright, or complicated? Read on for answers to those questions plus teases from other shows!

I’m suffering from some serious New Amsterdam withdrawal. Any scoop on Helen Sharpe? –Luana
And how! When(ever) Season 3 of the NBC hit arrives, “You’re going to learn everything you ever wanted to know about Helen Sharpe,” says EP David Schulner. “Follow Sharpe home? Check! A family bombshell? Check! Someone sharing Sharpe’s bed? Check! All these revelations will not only surprise the audience, but they’ll surprise Sharpe’s closest friends at New Amsterdam. How well do they know her? How well does Sharpe know herself?”

Do you know what Courtney’s arc will be in Stargirl Season 2? –Belle
I asked Stargirl creator/series EP Geoff Johns that very Q, and he… was quite guarded with his answer. “It’s such a spoiler if I tell you [her arc],” he said. “But it has to do the complexities of what being a hero actually means, and darkness versus light. There’s much more to it than that, but I wouldn’t want to spoil it too much.”

Will Chicago P.D.‘s Kevin Atwater have a love interest this season? I’m tired of seeing him as “the muscle man” — he needs a life outside the district like the other characters. –Chealsey
Showrunner Rick Eid tells TVLine, “There’s definitely a chance” of love for Atwater this season — so fingers crossed!

What’s in store for Chicago P.D.‘s “Upstead”? Or teaser or gossip you can give us on them? –Alicia
“Their feelings for one another are obvious,” showrunner Rick Eid attests. But there’s a hitch: “Problem is work life and a permanent job offer from the FBI make it difficult to act upon” those feelings. 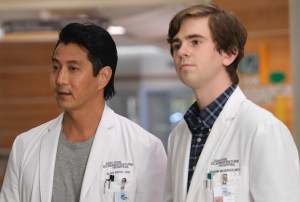 Any scoop on The Good Doctor‘s Park, now that he’s staying in San Jose/not moving back to Arizona to be with Mia? –Claire
“We’re having a little more fun with the Park and Morgan relationship and the rivalry between the two of them,” executive producer David Shore tells TVLine. “We touched on that a little last year, but it’s going to manifest in, I think, a lot more fun this year.”

Anything on Mom? I’m sticking with this “new” season, so far… —Abby
As the CBS sitcom sheds more light on its Anna Faris-less ensemble, “We are going to see Tammy (played by Kristen Johnston) really come into her own this season,” says co-creator Gemma Baker. “Her business is taking off and her newfound success will have some unexpected consequences.”

Any news on Stumptown getting picked up anywhere for Season 2? –Carrie
There are no takers yet — though the ABC castoff is theoretically still up for grabs. 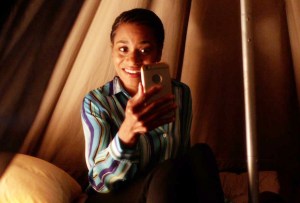 That Grey’s Anatomy scene with Maggie, Winston and the tent made me in instant fan. Any scoop on what’s next for them? –Tray
The logline for this Thursday’s “My Happy Ending” suggests that, at least for a little longer, the new twosome will continue to suffice with FaceTiming (and OtherBodyPartsTiming). But down the road, Maggie is going to have to introduce her new boo to her Grey Sloan family — which may not be as classically Maggie-awkward as you’d expect. “Given the seriousness of this moment [in history],” portrayer Kelly McCreary tells TVLine, “I expect her to handle it with some grace. I know [these quarantimes] will keep things in perspective.”

Understandable if certain world events have held things up a bit, but will Vanessa Bayer’s Big Deal pilot be appearing on our screens any time soon? –Brendan
Indeed, production of the Showtime pilot was delayed due to COVID-19, and there is at this time no news on when it will start.

Seeking scoop on Station 19! –Shaaista
Though showrunner Krista Vernoff has promised a lighter tone to Season 4 than 3, Boris Kodjoe (Sullivan) and Jaina Lee Ortiz (Andy) suggest that we take that preview with a grain of salt. “Lighter, I guess, depends on your perspective,” Kodjoe chuckles. “Looking at the year 2020, I think anything is lighter than that.” Ortiz in turn advises that we keep the tissues handy. And also chips. “I feel like you’ll want to eat your feelings every single episode,” she warns TVLine. “You’ll be doing nothing but eating comfort food while watching.”

Any scoop on the Sundance/AMC show This Close? –Amanda
I asked around, and there is no word at this time on a possible Season 3 of the Shoshannah Stern/Joshua Feldman comedy. 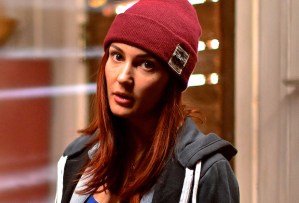 Purgatorian here. Any info on when the next half of Wynonna Earp Season 4 will be? –Jenna
When it will be? Officially, still just “2021.” But to tide you over, I have some what to freely share, via the lovely Kat Barrell. As hinted by the pumpkiny-headed something glimpsed in the 4B promo, “We have some really fun Villains of the Weeks coming up,” Barrell told me. After battling Garden “clones” and Clantons, “We go back to a little more of the traditional Wynonna model where … there’s a little bit of whimsy, and some spells, and some lore around them that I really, really enjoyed.” Meanwhile, on a grander scale, “We’re building to kind of figuring out a bit more about Black Badge and how they’re factoring into the equation at this point in time,” said Ms. Haught’s portrayer.

Any news from MacGyver? Will he ever know about Riley’s feelings? –Amel
This is small (if any!) comfort, but I am hearing that if anyone was conflicted about Mac’s love life before, they’d better “buckle up” for Season 5. Because whether you are team #MacRiley or #MacDesi, there is going to be plenty to ‘ship.

What happened to the music played at the beginning of NCIS: New Orleans? –Virma
Worry not, I am assured that the show’s opening theme will return this Sunday.

I’m curious to see Sam’s daughter again on NCIS: LA. Any idea how she will take to Katherine (played by Moon Bloodgood)? –Jaime
The answer may be “too well.” As Sam and Kamran clash over how her activism might jeopardize her future at Annapolis, he’ll invite Katherine, as the closest possible thing to a “mother figure,” to speak with his daughter, and “there’s a good chance that Katherine actually sides with Kamran, and Sam himself is the odd man out,” says showrunner R. Scott Gemmill with a laugh. “And so Sam is like, ‘That’s not what you were supposed to do!’” 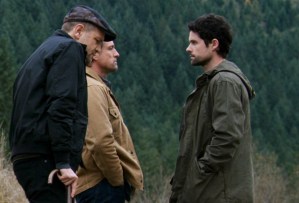 Will Virgin River give us more backstory of what the three men went through in the war? Specifically, what makes Jack feel responsible for the man who steals from the restaurant? –Cindy
Ahead of the Netflix series’ Nov. 27 return date, I delivered your Q to showrunner Sue Tenney, who kindly wrote back, “We will indeed shed some light on what Jack, Preacher and Brady (the man who steals from the bar) went through during the war. Jack feels a responsibility to Brady because, having lost one soldier under his command, he is determined to never lose another. Although Brady will continue to test Jack’s commitment.”

If you want the Inside Line on a favorite show, email [email protected]! Questions left in Comments will not be read and may count against your final score. (With additional reporting by Vlada Gelman, Charlie Mason and Ryan Schwartz)