Naga Munchetty and Charlie Stayt were back together presenting BBC Breakfast for the first time this week. Early on in the show, Naga wasted no time in getting her own back with her co-host after an incident which occurred last week. It came when the pair were reviewing the morning stories in the papers and Naga was able to mock Charlie over his inability to work out a cryptic photograph.

Naga began: “Do you remember last week you showed me a picture and I couldn’t see it very well? And you enjoyed the fact that I couldn’t tell your cyclist was cycling down a hill and not up a hill.”

“It’s over now, it’s fine,” Charlie stated but Naga continued: “No, I haven’t forgotten Charlie – like an elephant I have not moved on at all, an elephant never forgets.”

Viewers saw Nagw hold an excerpt of the paper up and she asked Charlie: “What do you see here?” 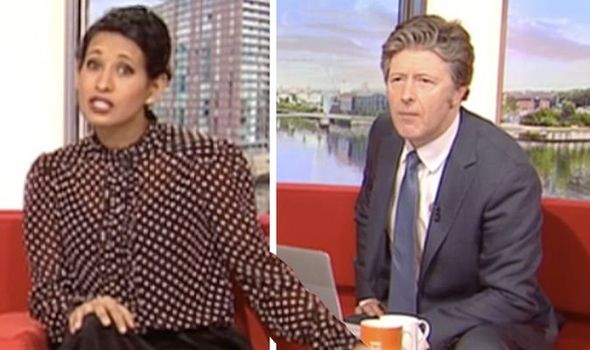 “It’s a pet lying on the cover of a bed or rug, or something,” Charlie commented.

“Two dogs – see the second?” Naga remarked and after a pause, her co-star said: “Not very clearly, no.”

“It’s at the top here – just there, there’s the second and there’s the third,” Naga pointed out. “They’re dachshunds blending into the carpet – I just like the picture.”

Charlie then moved on and spoke about the story he found interesting from the papers. 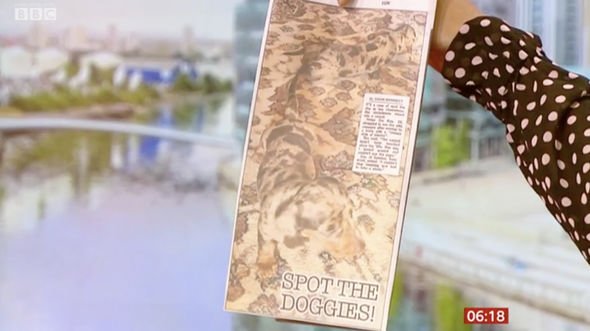 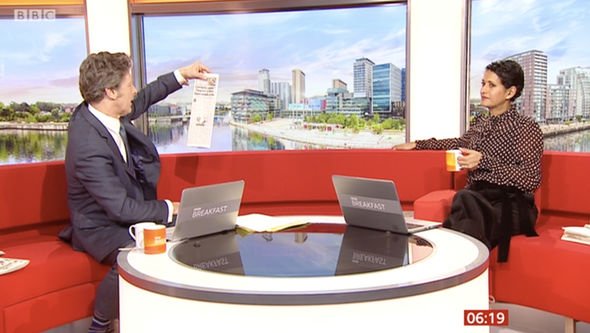 “Now, a lot of people spending a lot of time at home. You may be wondering whether very famous people are getting involved in chores they didn’t do before,” he explained.

“George Clooney has revealed during lockdown he has been doing seven loads of laundry a day.”

“Because he’s got very small children – he’s got youngsters. He’s also doing a variety of household tasks including sewing, cooking and mopping the floor,” Charlie argued. 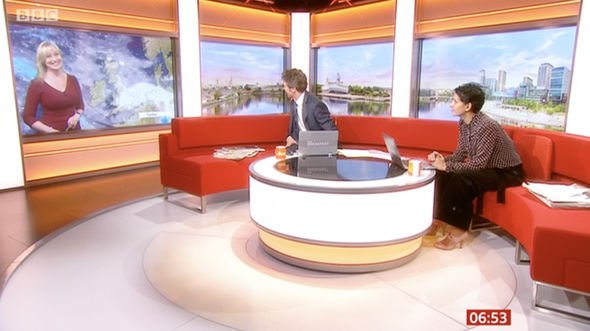 Naga turned to the camera and said: “I’m sure a lot of parents – get in touch if you can help me with this – why if you have young children do you need to do seven loads of washing a day?”

After some consideration, Charlie responded: “Because…it’s a lot. There is a lot of washing.”

“Seven loads? And they’re that big – clothes are like that big,” she remarked referencing a measurement of one foot.

“It may have been a pile-up on one particular day,” Charlie argued as Naga joked: “Or maybe they have a really tiny washing machine!”

Elsewhere on the show, the pair were seen joking with Carol Kirkwood.

The meteorologist was on hand to deliver the latest weather news – including several warnings of snow across various locations of the UK.

“We can always tell when you’re worried Carol – you hunch up your shoulders,” Charlie commented.

“I just want to get it all out so you’re aware this has the potential to happen,” she replied.

And Naga added: “Let it all out Carol, let it out. Better out than in as they say Carol!”

BBC Breakfast airs every day at 6am on BBC One.

END_OF_DOCUMENT_TOKEN_TO_BE_REPLACED

‘The Greatest Showman’ Director to Turn Robbie Williams’ Life Into a Biopic!

The Greatest Showman director Michael Gracey has announced that his next movie will be Better Man, a biopic about singer Robbie Williams. Deadline reports that the film will follow the singer’s “ascent, exploring the experiences that made him who he is, and the demons he battled both on and off the stage as he became a huge star on the

END_OF_DOCUMENT_TOKEN_TO_BE_REPLACED

Feeling Pandemic Fatigue? Here's How to Boost Your Mental Health While Stuck at Home

Products featured are independently selected by our editorial team and we may earn a commission from purchases made from our links; the retailer may also receive certain auditable data for accounting purposes. After months of adjusting our daily lives to the coronavirus, it’s okay to still not be feeling 100—even if you’ve become a pro at masking up, washing your