UPDATED, 4.28AM PST: Looks like the offending tweet has been deleted, no official word from Netflix as of yet.

PREVIOUSLY, 4.20AM PST: The official Twitter account for Netflix’s supernatural series The Chilling Adventures Of Sabrina caused outrage on Sunday, January 10, with a tweet that made reference to “Bloody Sunday” and featured a series of pics of cast members including star Kiernan Shipka splattered in fake blood. See below. 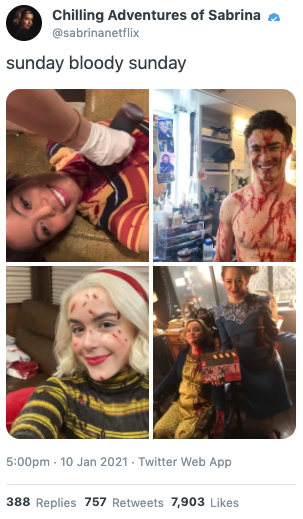 The presumably inadvertent reference – Netflix has been asked for comment – to the tragic 1972 massacre in Derry, Northern Ireland, prompted fans of the show to reply pointing out that the caption would likely be taken as offensive and that the streamer might want to re-think it.

“Please take a minute to read your caption, then put it into google. Then apologise to your Irish fans and anyone who was affected by the atrocities,” wrote one frustrated user.

The caption is also the title of a song by Irish rock band U2 which describes the horror of the Troubles in Northern Ireland with focus on the 1972 incident, when British troops shot and killed 14 unarmed protestors.

Several users also pointed out that the tweet had echoes of a scene in British comedy I’m Alan Partridge, in which Steve Coogan’s character uses the phrase ‘Sunday Bloody Sunday’ without realizing it references a massacre.