To say James Gunn’s filmmaking leans on music is like saying the DC cinematic universe banks on Batman — both assertions are true, and both are understatements. The writer/director behind two “Guardians of the Galaxy” films, as well as “The Suicide Squad” and “Super” (the latter of which feels most relevant to his latest project, “Peacemaker”), Gunn has a bit more than an ear for good soundtracks. His first MCU joint hinges on its lead’s lifelong attachment to an “Awesome Mix” (Vol. 1). His second foregrounds a boss battle that (literally) revolves around a dancing Baby Groot. And in his inaugural DC Comics feature, Gunn caps off his uber-violent opening sequence with a musical punchline, playing The Jim Carroll Band’s “People Who Died” right after one suicide squad is brutally, unwittingly sacrificed, so another can utilize the distraction and enter enemy territory undetected.

The apparent incongruity between such a dependence on melodic montages and a character so swole he can barely lift his two left feet felt like an early warning sign for “Peacemaker,” Gunn’s HBO Max spinoff led by lumbersome star John Cena. Don’t get me wrong: Anyone who worked that long and that successfully in the WWE knows how to move their body, but part of the titular hero’s essence — as evidenced by his supporting role in “The Suicide Squad” — seemed to include a kind of stilted machismo reflective of guys who see cutting loose as an embarrassment; the high school jocks who would nod semi-rhythmically at prom or try to start a mosh pit, rather than let the groove get them.

How could Gunn’s style and Peacemaker’s lack thereof coalesce into anything but a violent, inconsistent, sort-of-superhero story? For one, the creator contorts his main character like an action figure — bending his dense physique for maximum entertainment, even as he embraces the inelasticity inherent to Peacemaker, aka Christopher Smith. (Shout-out to choreographer Charissa-Lee Barton and fight choreographer Allen Jo for finding movements emblematic of this very strange man.) Often, the sheer sight of Peacemaker dancing is good for laughs (and he dances a lot), but Cena’s dedication to his character’s unfiltered enthusiasm also proves infectious. By rooting the series in metal bands and hard rock anthems (the character’s lifelong favorites), Gunn’s “Peacemaker” is indeed moved by music, and it moves surprisingly well. 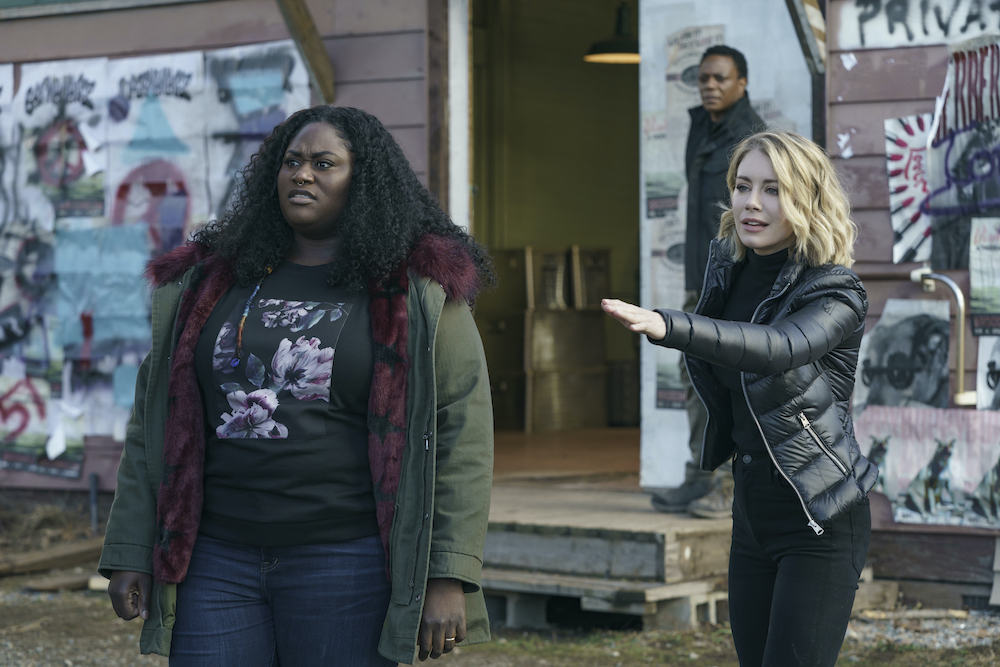 Picking up with a brief recap of the movie — where Peacemaker betrays his squad, kills Joel Kinnaman’s Rick Flag, gets shot in the neck by Idris Elba’s Bloodsport, and is generally a huge “douchebag” — the premiere episode quickly reorients the viewer behind this new protagonist. Where once stood a jingoistic killer, more obsessed with looking cool than doing the right thing, now there’s a broken man on the run. Haunted by Flag’s final words (“Peacemaker: What a joke.”), Christopher is also immediately challenged about his penchant for killing people of color by Jamil (Rizwan Manji), a janitor at the hospital who bonded with the patient claiming to be a superhero over a medicinal, now-legal joint. Rather than dismiss his new friend’s condemnation, Christopher promises to “kill more white people” — which isn’t exactly the right answer, but goes to show he’s open to change.

For the most part, his softening works. (Having a pet sidekick never hurts, and “Eagly” the eagle hits his mark.) Peacemaker still says stupid, offensive things. He’s sexist, racist, and a bully. All of these traits are played for laughs, and many of them get brushed under the rug by another character insisting he really is a good person on the inside. Still, “Peacemaker” shows just enough awareness of its lead’s reprehensible behavior to avoid too much criticism of having its cake and eating it, too. (His far-worse father creates a compelling question of generational racism and what it takes to overcome the sins of our primary educators — more on that in a bit.) The series makes it clear that pleading ignorance when punching down isn’t a forgivable flaw after it’s condemned and then repeated anyway. Chris can’t just promise to be better; he’s forced to go through with it.

But that doesn’t mean he’s a good guy. Much like “The Suicide Squad,” “Peacemaker” spends a bit of time dwelling on the sometimes-blurry line between heroes and villains. Christopher is mocked repeatedly when he claims to be a superhero. He repeatedly can’t name a “cadre of supervillains” he’s fighting. His best friend, Vigilante (a very good Freddie Stroma), is often used as a marker of Peacemaker’s evolving ethics; the ninja-like sidekick is so dedicated to their old way of doing things, he can get a little flummoxed when suddenly Chris doesn’t want to gun down anyone in their way. Still, the series’ most compelling theme isn’t good guys vs. bad guys; it’s how bad behavior is learned, especially as passed down from parent to child. 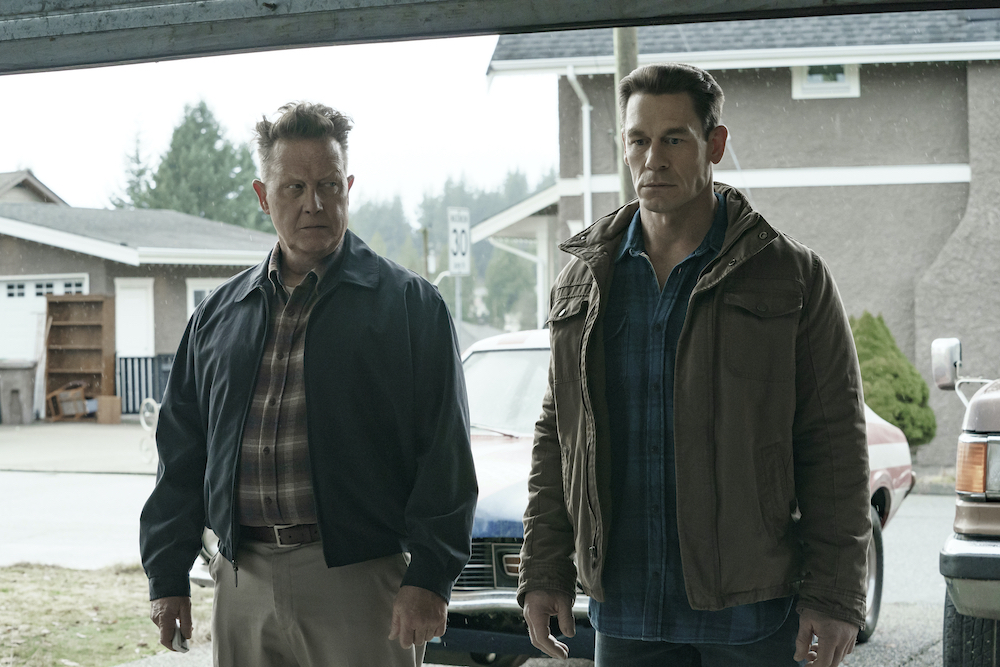 Robert Patrick plays Christopher’s truly terrible father, Auggie, a deep state conspiracy theorist and white supremacist with nothing but hate in his heart for a son who’s working for the government. Early on, Auggie is used to emphasize Chris’ better qualities — as if to say, “If you thought Peacemaker was bad, just look at his dad!” — but their relationship develops into a darker tale of how damaging beliefs can foster in isolation. (Dads as villains may be the key to making Gunn’s superhero stories click.) It’s only when Christopher becomes part of a team — recruited by Clemson Murn (Chukwudi Iwuji), a subordinate to Viola Davis’ Amanda Waller, to assassinate mysterious figures who pose a threat to America — that he starts to see first-hand how hurtful his father’s ideology can be, and how easily it became a part of his own personality. (The theme is also reflected by new team member Leota, played by Danielle Brooks, whose vision of herself is clouded by how her mother sees her.)

“Peacemaker” loses a bit of steam as it goes along. The structure could be sounder, its points sharper, and its dialogue further honed. (Sometimes it feels like Gunn creates logic gaps just to write his way out of them with jokes, when it would’ve been better to just avoid the holes in the first place.) But Gunn’s creative nonchalance paired with his unique ability to tune into Peacemaker’s musical frequency makes for a propulsive first few episodes, and carries on long enough to leave you curious how it all shakes out. When you first lay eyes on the title sequence’s choreographed dance routine (set to Wig Wam’s infectious “Do You Wanna Taste It?”), you may be more befuddled than impressed. But by the seventh episode, you’ll be out of your seat, swinging your arms like they’re on hinges, trying to memorize every step. “Peacemaker” isn’t perfect, but it follows the beat of its own drum, and that’s enough.

“Peacemaker” premieres three episodes Thursday, January 13 on HBO Max. One new episode will be released each week until the finale on February 17.