Eurovision was an ‘embarrassment to watch' says Phillip Schofield

The Prime Minister’s former chief adviser Dominic Cummings is facing questions today (May 26) about his time working in No. 10 and the decisions surrounding the coronavirus pandemic. This Morning’s Phillip Schofield and Holly Willoughby invited Nick Ferrari and Nicola Thorp onto the ITV show to discuss Cummings’ accusations against Prime Minister Boris Johnson. However, host Phillip couldn’t help sharing his own thoughts on the actions of Cummings and the leader of the country.

Ferrari began by saying Cummings speaking out is “purely revenge” on the Prime Minister.

However, Thorp defended the actions of the PM’s former chief advisor, saying his choice to speak out “shines a light on what is going on”.

Schofield then asked Thorp: “Don’t you think when you watch it all play out that it’s a bit of a scuzzy street fight really?” 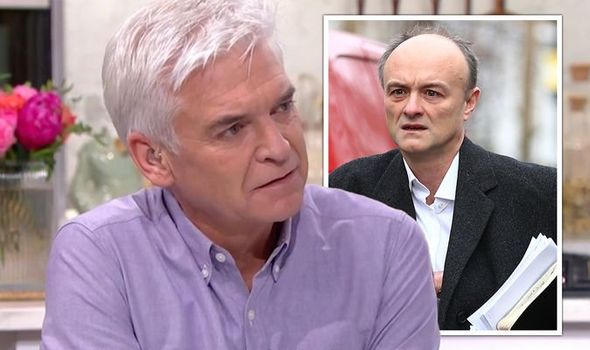 “I think people are taking everything with a pinch of salt. But, I’m not a particular fan of Dominic Cummings, far from it.

“But, finding out now when now, you know, 12 months on what actually his point of view was and what was said.

“I mean awful things have come out of what Boris Johnson has claimed to have said.

“You know, wanting to be injected with the Coronavirus on live TV,” she added.

Thorp continued: “I really think that the British public should be taking note of who this man is, who’s our Prime Minister, from the man who was closest to him.”