Two is a coincidence and three is a trend — and that includes the burgeoning genre of road trip movies about teen BFFs dealing with reproductive health. Natalie Morales’ “Plan B” joins Eliza Hittman’s luminous “Never Rarely Sometimes Always” and Rachel Lee Goldenberg’s cheeky “Unpregnant” and, like those films, follows a pair of best friends who are forced to fend for themselves in a world that doesn’t value girls or their medical autonomy. Much like “Unpregnant” in particular, “Plan B” mixes real humor with some uncomfortable truths about the current state of sexual healthcare in America, though it doesn’t hammer its realities home quite as hard as its predecessors.

Best friends Lupe (Victoria Moroles) and Sunny (Kuhoo Verma in a star-making comedic turn) both come from strait-laced, “traditional” families — Sunny is convinced the “Indian mafia” are reporting back her every move to her overbearing mom, Lupe’s Mexican-American clan is decidedly church-centric — and are some of the few people of color in an overwhelmingly white small town in the middle of nowhere, South Dakota. They’re both a little bit sex-crazed (hey, turns out that puberty is weird and hormones are very real), with the more experienced Lupe dabbling in a sexting relationship with the mysterious Logan, while the more reserved Sunny is nursing a major crush on local cutie Hunter.

Neither of their families are interested in having real conversations about sex, and their batty home economics teacher (Rachel Dratch in a small role) is saddled with teaching them about abstinence and little else. What’s a girl — a real, red-blooded, hormone-addled, classic teenage girl — to do? At least they have each other.

Boned up on plenty of teen movie lore and giddy with the blind luck of Sunny’s mom being out of town for the weekend, Sunny and Lupe opt to throw a rager, in hopes that both Logan and Hunter will attend and get busy with the darling BFFs during the night’s revelry. What could go wrong? After she overhears some mean girls terming her preppy sartorial look as being more “huge American Girl doll” than cool teen, Sunny opts for a quick-change makeover, including a handmade thong. One painfully honest virginity-losing session later, and the movie finds Sunny and Lupe in need of a different kind of diversion: How the hell they can obtain a Plan B pill before it’s too late for shell-shocked Sunny?

“Plan B” finds its drama in weirdo loopholes and mind-bendingly dumb state laws. Sunny and Lupe are denied the pill because they’re underage and South Dakota, like many states — and this is true! — allow its pharmacists to invoke a “conscience clause” when it comes to doling out emergency contraception to anyone under 18. (Basically, they can refuse it based on how they feel about the situation.) One bad pharmacy run later, the girls set out for the nearest Planned Parenthood, triggering a wacky and raunchy road trip with real stakes. 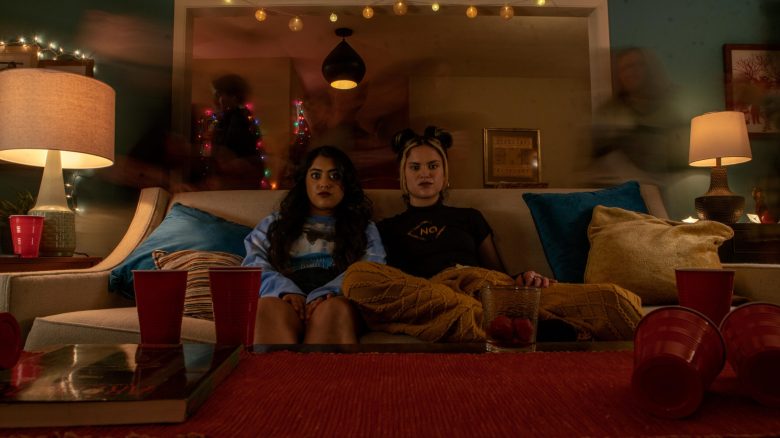 While both “Never Rarely Sometimes Always” and “Unpregnant” dug more deeply into the very real ramifications of such laws, “Plan B” is less adept at weaving together its on-screen hijinks with real world implications. Instead, it often zips off into raunchy, wild subplots that wouldn’t feel out of place in a film with less important matters on its mind. There’s a sequence that involves a pierced appendage that would probably make every single member of the MPAA ratings board scream, plus a number of subplots about illicit drugs, and while those are all funny enough, they tend to scan as coming from a different kind of movie.

The film is Morales’ second outing as a director in less than six months: She previously helmed the pandemic-produced “Language Lessons,” which she co-wrote and starred in with indie stalwart Mark Duplass. The same sense of intimacy and warmth that ran through that feature is present in “Plan B,” which often swaps those outsized comedic gags for moments built on close character interactions. Those are the moments when “Plan B” really seems to be working its magic.

Joshua Levy and Prathiksha Srinivasan’s script offers predictable beats and unexpected pleasures in equal measure; it’s inevitable that something will happen to force Sunny and Lupe into a knock-down-drag-out fight, but “Plan B” tackles that necessary beat with rare honesty and real laughs. Verma and Moroles are a formidable duo, mismatched BFFs with actual chemistry and obvious affection for each other, and Verma’s insane comedic timing in particular helps push the film forward even when it threatens to stall out as it tips between wacky comedy and key character moments.

It’s not exactly a good sign that the current state of America’s dismal reproductive healthcare rules and regulations, plus the continued discounting of young women of being capable of making their own choices, could inspire three films with roughly the same plot line in less than 18 months. But it’s also thrilling to see filmmakers contextualize these issues in human terms, and “Plan B” excels at entertainment as advocacy. It also just so happens to include a pierced penis as a hysterical plot point, and it’s exactly that degree of liberated raunchiness that makes it worthy of celebration.

“Plan B” starts streaming on Hulu on Friday, May 28.