Queen had special conversations with reverend days before death

Good Morning Britain presenters Kate Garraway and Adil Ray were joined by Reverend Minister Martin Fair on Sunday, who explained he had an intimate dinner party with Queen Elizabeth II. He opened up on the informality of the occasion and admitted that he felt at ease knowing they were having a relaxing evening. When asked about his final conversation with Her Majesty, Martin admitted that some of the conversations will always “stay between us”.

Introducing Martin to the show, Adil began: “Minister Martin Fair spent time with the Queen just nine days before she sadly passed away after being invited to Balmoral as a guest preacher of the church as the Royal Family attend there.”

Kate continued: “He says the late monarch was in very good spirits, and the two giggled about the famous Paddington sketch from her Platinum Jubilee celebrations which were so wonderful, and she remarked it as ‘rather fun’.

“That in itself is a lovely thing and a comfort to everybody, I think that she was in good spirits just days before she passed. Tell us a little bit about that particular time you spent with her.”

Martin revealed: “I look back on that time now as being very special, it would have been anyway, of course, but now it seems more of an importance in my own mind. 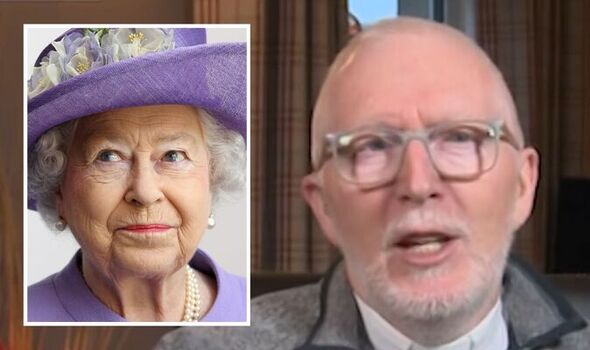 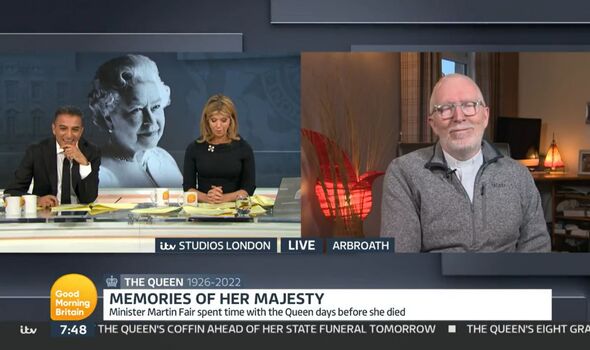 “I had been there once before, eight years ago back in 2014, and I think going this time, I was more relaxed because I knew what to expect.

“I knew I had been made very welcome and that I would be allowed to relax and just be myself, I think, of course, mostly we have seen Her Majesty The Queen and other members of her family in the formal state.

“So it was an enormous privilege to be with the family when they are enjoying downtime and when they are themselves relaxing, and so it was very natural, very ordinary in that sense.

“And yet for an ordinary person like me, I was pinching myself all the way through it thinking, ‘I am sat next to Her Majesty the Queen and Sophie Countess of Wessex’.” 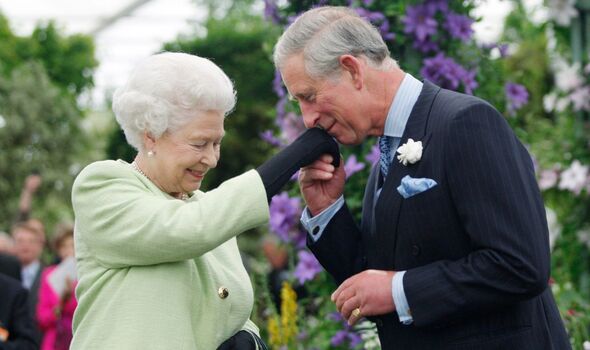 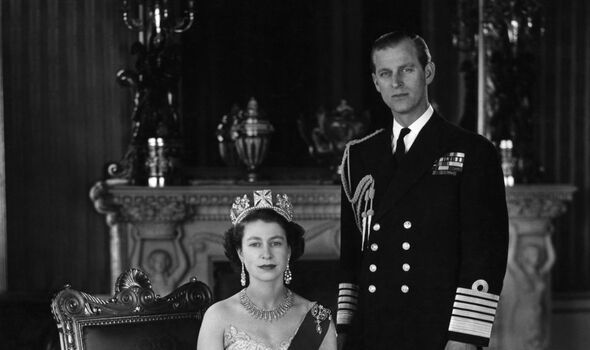 Intrigued as to what they spoke about during the visit, Kate asked: “And she shared some wonderful things which I guess now particularly must be extra special.

“Tell us a little bit, if you want to break any confidence, if you can share some of what she said to you in that time.”

Keen to keep the moment between them special, Martin admitted: “Some of it will forever remain between myself and stay between us, but other parts of it of course are much more open.

“Halfway through the dinner, I turned to her and I said, ‘I’m what for you was the highlight for the Platinum Jubilee celebrations?.’

“Without much thought, it was the trooping of the colour, but then I said, ‘Ma’am if I might be as bold to suggest that for me and for many others it was your little tea party with Paddington’.

“And when I said that, she had a broad smile on her face and she remembered the making of it and she said, ‘It was rather fun, wasn’t it?’ so that was a lovely moment to share with her.”

Adil went on to express how much Queen Elizabeth was respected across the nation, to which Marin revealed the last words that he spoke to her.

He expressed: “I am not sure what prompted me to say it, but I just felt the moment and I said, ‘Ma’am I hope you know just how much you are respected and loved across the country’.

“She took a momentary pause and she said, ‘Perhaps you are right after all one has been around for quite a while’, and I said to her, ‘It’s not perhaps it is absolutely for sure’.

“That is how much you are respected and loved’ and then following that, I said to her, these really were the last words that I said to her.

“‘Ma’am people of faith across the whole of this country are upholding you in prayer right now’, and she said, ‘That is most kind, thank you’

“And I am glad I said that to her, and those were the last words I said to her.”