Home » TV & Movies » Revenge, tragedy and showdowns: All to come for the Mitchells in EastEnders

Revenge, tragedy and showdowns: All to come for the Mitchells in EastEnders 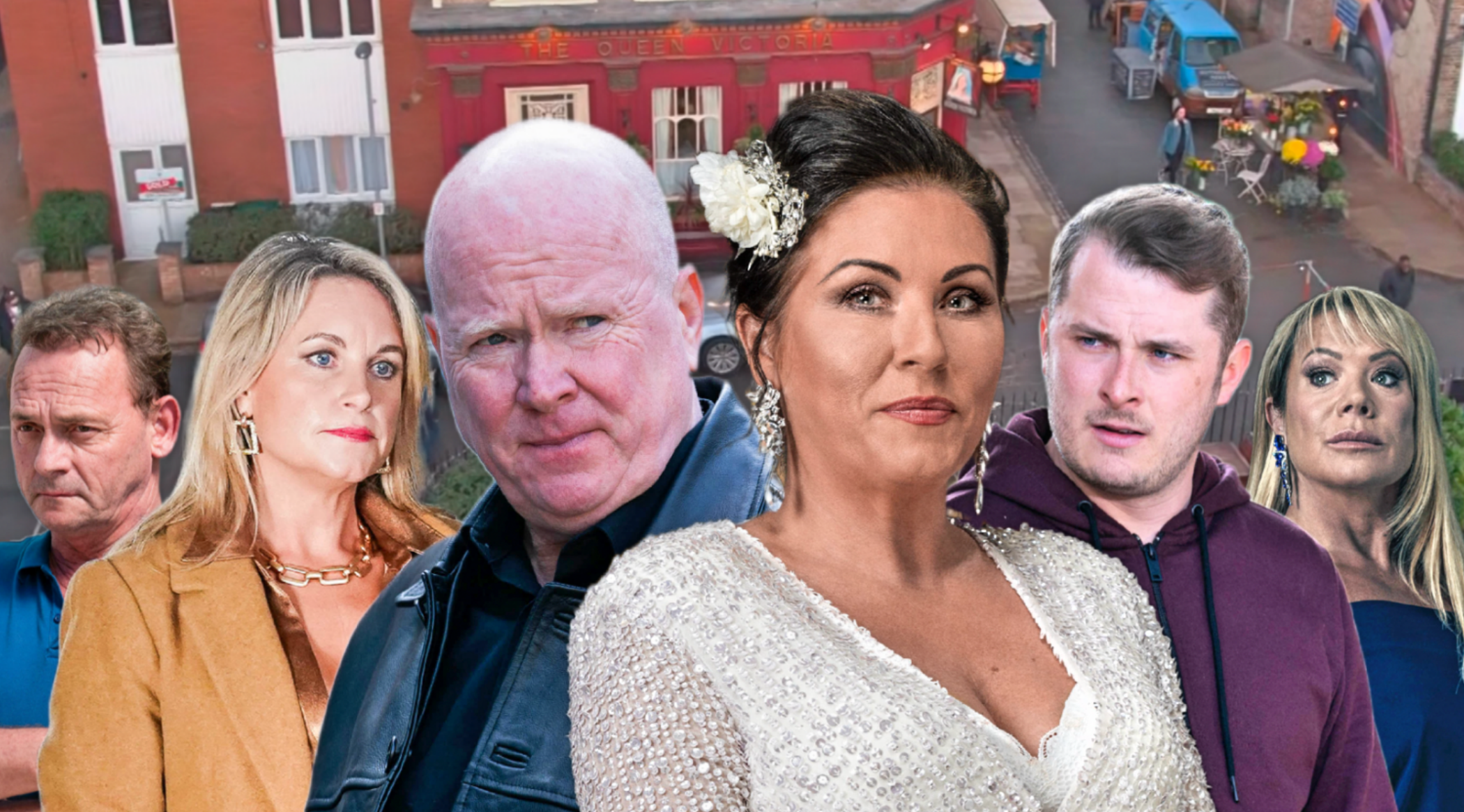 Let’s get something sorted before I plough into this preview; I know some people have been pretty vocal about the current Mitchell dominance in EastEnders.

I absolutely want to get it off my chest that I have zero issue with this; the more the merrier as far as I am concerned.

He’s a thug, an abuser and an out and out vile human being in many ways, so I am by no means a Phil Mitchell defender.

Is he a hero who deserves to evade comeuppance? Not at all. Is he one of the most entertaining Walford characters? One hundred per cent.

Since he was released from prison, Phil has been central to the show’s drama and, as many people see it, its resurgence.

Since 1990, the Mitchells have been a key part of EastEnders’ DNA, with iconic characters from the Queen of The Vic Peggy Mitchell to the much missed Ronnie and Roxy. Who were done dirty by the way, I will never not fight on that hill.

At the moment, we have Phil’s war with DCI Keeble and his upcoming wedding to Kat Slater; something which is bound to end in pandemonium. It’s a given.

At the same time, the spark between Phil and his OG Sharon has been reignited. He was always toxic to her, as with every woman in his life, but there’s no denying that there is an enduring love and passion between them.

I am not entirely sure how Phil manages to keep attracting love interests given his track record, but it is what it is and if he has to be with someone, Sharon seems to be the way they are going with it.

Which means a lucky escape for Kat, who seems destined to be with the slightly less problematic Alfie Moon if we’re prepared to forget that whole Hayley Slater era. Which I am.

So Phil is a busy guy.

That’s not a huge surprise; between himself and his son Ben, the screentime is never lacking.

What’s more of a shock is that hapless Billy Mitchell, current king of the odd quip on the market and endless pining for Honey, is about to get his biggest material in years.

From his origin as a violent abuser to his relationships with Jay and Lola and his long running arc with Little Mo, right from being her knight in shining armour against vile Trevor, Billy has not always been a side performer. And Perry Fenwick can act. Really act.

He is now in DCI Keeble’s sight, despite him being the least threatening member of the Mitchell fold. This thrusts him into one of the autumn and winter’s biggest storylines.

His entire life on the line, will Billy have his whole world destroyed by Keeble’s vendetta? Can Phil help save his skin? Will he be forced to flee? Will he take drastic action to get out of this?

It’s going to be gripping. But, like Phil, Billy has plenty of irons in the fire. There finally seems to be some progress where his relationship with Honey is concerned, as feelings are rediscovered.

And the arrival of Freddie Slater, who is under the impression that Billy is his dad, throws a ferocious cat into a flock of unsuspecting pigeons.

Between facing prison time, having his hopeful heart on the line and having this blast from the past, there is a lot to come for Billy.

But there’s more. Kim Medcalf’s return as Sam has been a triumph, and she is not without her own dramas.

With the spectre of her initial plot against Phil and the threat of drug pushing gangster Jonah hanging over her, Sam’s desperation and breakthrough of being in favour with her family is under threat.

There is also the continuation of the on/off romance with Zack – and the frankly terrifying Shirley blackmailing her.

I am expecting some classic Mitchell fireworks when the full truths are exposed.

Meanwhile, Ben is enduring the aftermath of a horrific rape ordeal at the hands of Lewis; with a tense eventual stand-off with his attacker allowing him some small element of closure.

He has suffered for months, his self destruction sending him spiralling, but now comes the journey to get back on his feet and beat the trauma he has been going through.

Part of that ordeal was losing his marriage to Callum; but is there hope for the pair? Many fans certainly hope so and there are plenty of hints that it will come to pass.

Callum has put his cards on the table – he still loves Ben and wants to reunite. There’s no denying that Ben feels the same; but the major obstacle is overcoming his own self loathing to get there.

A reunion is a prospect that divides fans and, while I am more in the camp of there needing to be a lot of changes from Ben in the way Callum is treated, there is, for many, a love story at the root of it.

Is it toxic or is it pure? I’d say it’s more in between but it certainly hasn’t been extinguished, so I’m cautiously optimistic for the Ballum fans.

But tragedy looms – for Ben, Jay and Billy and, most notably, Lexi. It is all but confirmed that Danielle Harold’s final storyline will be tragic, with every rumour pointing to Lola dying from a brain tumour.

This is a gutting blow both to the Mitchells and to the show; and I am still questioning whether this is the right decision, given that the additional exits of Jada, Dana and Frankie have obliterated that age group of young women on Albert Square.

But, with the aftermath done right, it will open up colossal material for those left behind – and Perry, along with Max Bowden and Jamie Borthwick, who could finally have a Billy-esque push to the fore at long last, are capable of some really hard hitting stuff.

From the way I write this, it comes across that EastEnders is simply the Mitchell show right now, especially with so much investment in the fantastic flashback episode.

As I said before, this is no bad thing for me and the storylines weaved through the characters are varied, explosive and captivating.

But let’s not lose sight of the fact that the Panesars and the Carters are also promised to be huge too, with the aftermath of Suki’s ‘murder’ of Ranveer and the dramatic finale of the Janine/Linda/Mick strand which will culminate in Danny Dyer’s exit, which is bound to be the focus of Christmas.

Clans have always been at the heart of the show and recent episodes paint a hopeful picture that this is the focus of EastEnders’ current direction.

I could quite easily write a similar piece about everything else due to happen away from Mitchell mania, and it would be equally long.

But right now, it’s another solid block for the Mitchells – with every bit of potential that their previous classics have had.