Sarah Paulson on Upcoming Portrayal of Linda Tripp and 'Run'

Having made a name for herself with various, chameleon-like roles in Ryan Murphy’s FX anthology series American Crime Story and American Horror Story, Sarah Paulson is no stranger to playing interesting, dynamic women. Her role as Diane, a loving but secretive mother in the Hulu thriller, Run, and her upcoming portrayal of Linda Tripp in Impeachment, the third season of ACS, are prime examples of that.

The latter, whom Paulson is less than a week into playing, is the whistleblower and former Pentagon public affairs employee who is one of the key figures in a sex scandal that ultimately led to the impeachment of President Bill Clinton.

Impeachment will go inside the national scandal that made Tripp, Monica Lewinsky and Paula Jones key figures in the country’s first impeachment proceedings in over a century and is based on Jeffrey Toobin’s bestselling book, A Vast Conspiracy: The Real Story of the Sex Scandal That Nearly Brought Down a President.

Like the first two installments of ACS — The People vs. O.J. Simpson and The Assassination of Gianni Versace — Impeachment features an all-star ensemble, with Paulson joined by Beanie Feldstein as Lewinsky, Annaleigh Ashford as Jones and Clive Owen as Clinton. This marks Paulson’s second season of the true-crime series, with The People vs. O.J. Simpson earning her an Emmy for portrayal of prosecutor Marcia Clark.

“Marcia Clark was a person I connected to immediately in terms of a soul connection. I had a lot of empathy for her,” Paulson tells ET, adding that she also has a lot of empathy for Tripp, who became the villain of this real-life saga at the time. “[She was] essentially an unseen person in her work environment.”

The actress adds, “I do always feel an enormous responsibility when playing a real person.” But at the moment, it’s all so new for her.

In fact, just days before speaking to ET, Paulson shared a photo of her in costume as Tripp, revealing yet another dramatic transformation she’s undergoing to portray a real-life character on screen.

“It’s hard to say exactly what the experience will be like but it is certainly the biggest swing I’ve ever taken in my work life because I don’t look like her and there’s a lot that had to go into sort of helping to transform me,” she says, adding that the process has “been very exciting and totally unnerving when you look in the mirror and you literally can’t see yourself.”

Paulson also says she has a responsibility not to shy away from some the less flattering components of her personality or her choices. “Talk to me in a couple of months. We’ll have a different conversation,” she says of her feelings toward the character.

And if Tripp is truly the villain she’s been made out to be, then the role falls in line with Diane, Nurse Mildred Ratched (Ratched), Charles Manson follower Susan Atkins (AHS: Cult), Hypodermic Sally (AHS: Hotel) and Mistress Mary Epps (12 Years a Slave), as various darker personas she’s portrayed on screen.

“I do look at some of the things I’ve done and I think, ‘God, there’s a weird through line here that I’m not entirely comfortable with that,’” Paulson says. “So I have to maybe rethink what might be next because I think it is hard to live in those places. I’ve said that before.”

The actress adds, “It’s taxing and it’s hard to sort of live inside [that] and it’s hard to shake off sometimes. I think I probably will be stepping away from some of that kind of work in the near future, just to give my soul a tiny bit of a break.” 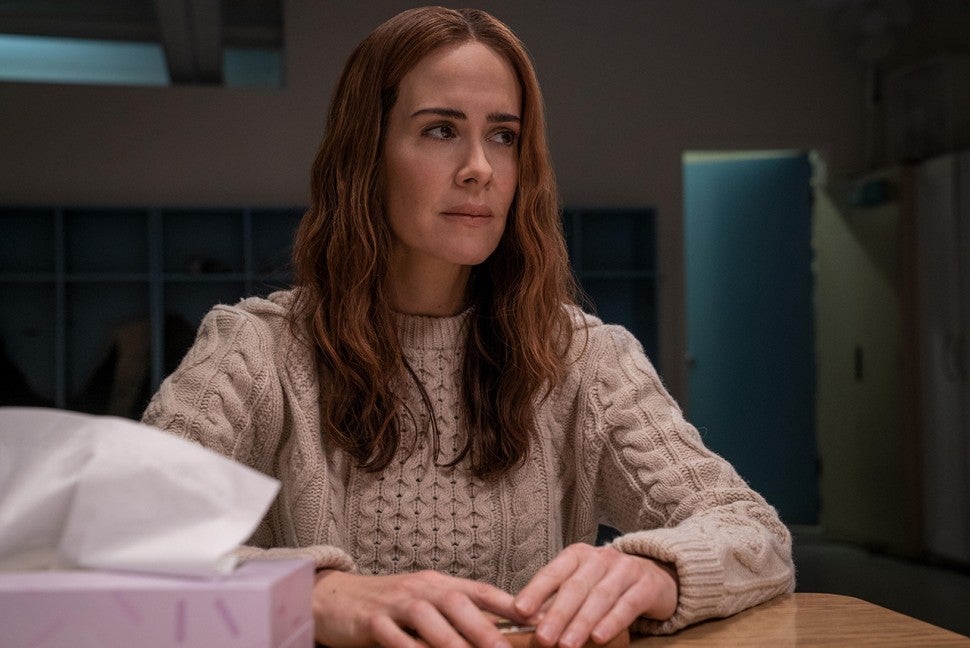 In the meantime, fans can enjoy her latest, thrilling performance as Diane in Run.

Written by Aneesh Chaganty and Sev Ohanian and directed by Chaganty, the film tells the story of an unnatural, sinister relationship between Diane and her wheelchair bound daughter Chloe (Kiera Allen). Echoing some past, real-life stories about mothers with factitious disorder imposed on another (FDIA), Run sees Chloe starting to unravel the secrets her mother has kept from her in order to keep her isolated from the rest of society.

While she didn’t approach Diane any differently than say Tripp or her many other past characters, Paulson purposefully didn’t take full advantage of all the information available to her in order to understand what was going on in her head. “I feel oftentimes people who are afflicted with these sort of psychological troubles are not always aware that that’s what they’re doing,” she says. “And I didn’t want to be well researched in a psychological affliction that Diane didn’t even know she had.”

And as she got deeper into the character, Paulson had an epiphany about whom she was playing. “She doesn’t have a diagnosis from a doctor and she’s not in the psychological care of anyone, so I don’t think she would know exactly the consequence of what she was doing.”