Search Party Series Finale Recap: Apocalypse Now-ish — Did Dory and Co. Survive… Whatever That Was?

Not a single person could have had that on their Search Party finale bingo card.

In her attempted quest to share enlightenment with the world, Dory Sief ushered in a zombie apocalypse. (I’m going to say that again: There is a zombie apocalypse in Search Party!) As the series finale kicks off, the cult leader extraordinaire that is Dory is crowd surfing over a sea of her followers, completely unaware of the undead madness happening around her. Elliott and Portia race over to stop everyone from eating the jelly beans, and yes, every sentence of this recap is going to be even more ludicrous than the last.

The main foursome rendezvouses in an alley so Drew and Dory can get caught up. Elliott admits to swapping the pills (“My egomania saved our lives!”), but Dory still believes it’s just hysteria and that her pills work. Portia can’t believe Dory “did it again, except it’s way worse this time.” And since Dory still needs more convincing, a zombie conveniently drops down to interrupt their chat and show her the light. For real this time!

The pals flee to Elliott’s, where he finds Marc macking it with another man. They flip on the news, which reports all of the psychosis happening in the streets. Shortly after, Elliott’s little freak of a child reveals himself to be a zombified monster, and so the five of them hit the road once again.

They soon realize that Marc ate all of the jelly beans that Elliott had left behind, and his transformation is fast and furious. As Zombie Marc chases them down, a police car strikes him down, but the car is full of the zombified social media influencers, and then they start chasing Dory and co. down!

The gang races to the bridge to try and escape Brooklyn, but an armed soldier notices a scrape on Portia’s arm and drags her away for quarantining. Dory, Drew and Elliott decide they can’t leave her behind, so they attack the soldier to save their bud. Eventually, they find themselves trapped in an alleyway with the undead all around them, until a mysterious figure with a flame thrower jump down to their rescue. 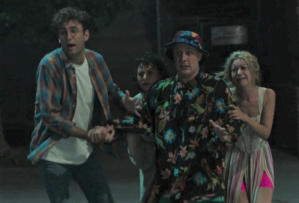 Their masked savior is none other than Chantal, who takes them underground to the only safe place in New York City. Chantal tells them that the world is ending because of her, an idea implanted into her brain by the late Liquorice Montague. But Dory replies that the world is actually ending because of her. The level of self-involvement and delusions of grandeur between these two are simply incalculable!

Drew worries that the monsters are going to spread all over the world, while Portia claims they’re in the exact same place the universe wants them to be. Dory can barely collect her thoughts. “I just wanted…” she repeats to her friends and then herself.

The next day, we see a completely empty Times Square. Portia is on a Broadway stage singing “Tomorrow” from Annie, while a now-married Drew and Dory sit in the empty theater. Later, they walk outside past a sign that reads “If you see the undead, don’t let it spread,” as Elliott tells them he’s thinking about moving to L.A.

They arrive back to a Safe Zone, where soldiers scan their arms (to make sure they’re human). They also walk through a canopy that sprays them with a sanitizing mist. Near the Safe Zone entrance, they see a zombified Gail being ushered into a transport vehicle. They walk past a wall that’s filled with missing persons posters. Dory falls behind to stare at it (harking back to one of the first scenes in the pilot), and as she does, a sense of calm washes over her.

Or is it a new sense of purpose?