'Shadow and Bone': Breaking Down the Biggest Book Changes (Exclusive)

SPOILER ALERT! Do not read the following article unless you’ve finished bingeing season 1 of Netflix’s Shadow and Bone…

If you were already a fan of Leigh Bardugo‘s best-selling book series, chances are you noticed quite a few on-screen alterations and adjustments during the eight-episode season of Netflix’s newest fantasy drama.

For example, did you happen to catch that epic Shadow and Bone book cameo in episode six? Or maybe you gasped out loud when you saw Alina’s amplifier in episode seven? What about the fact that we never got to explore the reason behind Kaz’s gloves?

In the Shadow and Bone books, Alina Starkov wears a powerful amplifier made from the antlers of a mythical white stag. The “collar” is described to be like a very intricate necklace that Alina could never remove. However, in the Shadow and Bone TV series, the creators took things a step further. In a gruesome scene in episode seven, David fuses the stag’s antlers directly into Alina’s collarbone.

When ET asked Shadow and Bone‘s leading lady her reaction to this huge change, Mei Li revealed that she was “so excited” for Alina’s new amplifier. “They told me this and this was the first week we got to Budapest and they had a couple of drawings and things to show me,” she explained. “And I just felt it added so much, especially given the fact the scene where we see it happening is horrible. It’s really horrible.”

“Ivan slows her heart rate, so she’s not even really conscious and her body is taken advantage of in that moment, and it felt really raw and really horrible,” the 25-year-old actress continued. “And I think it adds so much to Alina and Kirigan’s characters and their relationship. Nothing will ever be the same for them after that. And I think it was a really smart choice because it’s so invasive and it’s so horrifying for her that it really gave me a lot to work with basically.”

Heisserer, who serves as the writer, showrunner and executive producer on Shadow and Bone, revealed that this change was first pitched by the props department.

“Part of that was an early discussion with our props team, including our prosthetics guy,” Heisserer said. “And their concern was, ‘We don’t like the idea that anybody could steal your amplifier’ … And then we had some practical questions from our costume designer of if we’re going to have Jessie with an antler collar for the rest of the show, it’s going to create a bunch of other problems in terms of just costuming and whatnot. So that came out of the rigors of adapting something.”

Bardugo confessed that she also loves this new, “brutal” change from what she originally wrote in the novels. “When I first saw that scene with the VFX of the Darkling putting that collar on her, it was so powerful and so horrifying. It conveys the message of this, what is a very brutal and dominating act, and I thought it was just extraordinary,” she said. “And I think it also speaks to things that happen later in the book series when you find out where the idea of amplifiers came from, and that it’s really a corruption of something that Grisha used to do. So to me, it was incredibly visceral and powerful.”

In episode six, Jesper, Kaz and Inej decide to hijack General Kirigan’s carriage, and during their scuffle with the guards, David ends up throwing a book at Jesper to defend himself. But did you know that was actually a massive Shadow and Bone Easter egg? That’s right. A copy of Bardugo’s book made it into the show!

“Apparently Leigh Bardugo said that was her favorite moment because we did a read-through and she laughed out loud just at the reading of the scene, because the only line in the scene is ‘Hello,’ and then he hit me with a book,” Kit Young, who plays Jesper, said with a laugh.

“But she loves the idea of these two characters meeting who don’t meet beforehand,” he added. “And that book was a copy of Shadow and Bone, the first book, in Ravkan and every page was the whole book in Ravkan. So it was this kind of legend prop, so it’s probably worth quite a lot I imagine.”

“That is my favorite scene in the whole series,” Bardugo gushed. “I do in fact have that book. They asked me, ‘Would you like something?’ And I was like, ‘I know exactly what I want.’ And in fact, I had suggested that be the book. So I absolutely adore it. I love the moment.”

GENRAL KIRIGAN VS. THE DARKLING 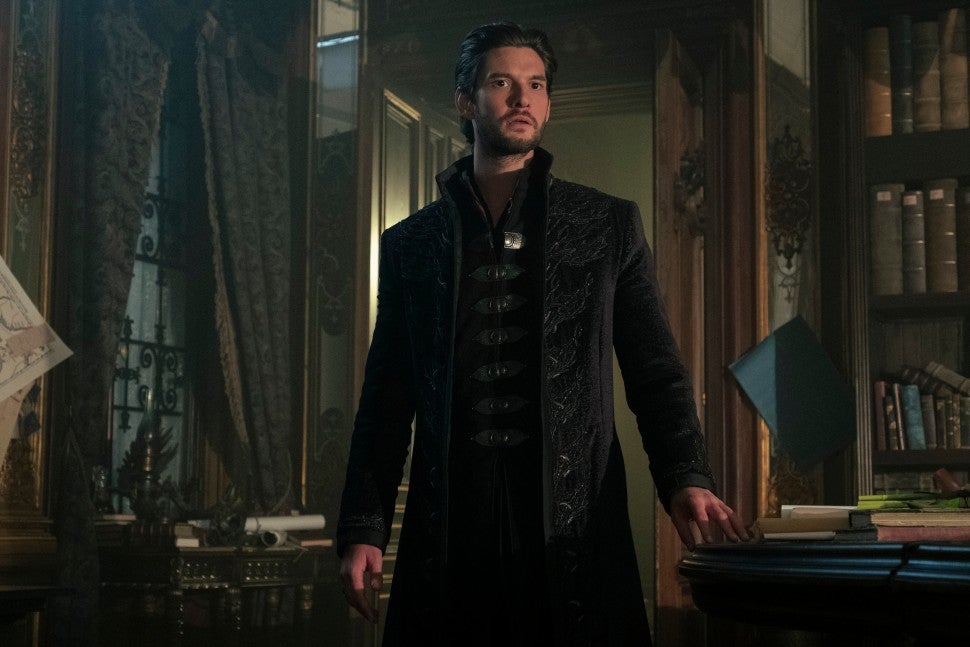 Throughout Bardugo’s books, readers are constantly learning about “The Darkling” and his mysterious, shadow-filled ways, but in the series, the character is most commonly referred to as General Kirigan. So why did they decide to change up his name?

“I think it really helped to keep him grounded for viewers,” Bardugo answered. “When you have his troops replying to him and talking about him, when you have foreign dignitaries talking about him, it telegraphed too quickly and too fully what his true history and the extent of his powers are. So for me, that was a smart move to keep him shrouded in a little more mystery before the big reveal.”

The Darkling himself, actor Ben Barnes, revealed that he was happy with this name change and the fact that in episode seven we got to see a brand new peek into Kirigan’s ancient past.

“We actually do hear him called The Darkling, but it’s in a little bit more of a derogatory kind of a way. And I think the choice was that actually The Darkling just sounds like a villain,” Barnes said. “And so that backstory that we see is not actually the backstory from the demon in the woods, which is one of the short stories about him. It’s something that’s fresh for the show in order to be able to understand a little bit where the Fold has come from.”

Barnes continued, “This is a man who’s lived many lives and probably lost many loves and tried every way that he can think of to protect the Grisha and the people that he cares about. So I think it sort of toys with your sympathies for him in that way, even though the behavior that he’s displaying now in this series sort of feels a bit more unforgivable.”

THE TRUTH BEHIND KAZ’S GLOVES 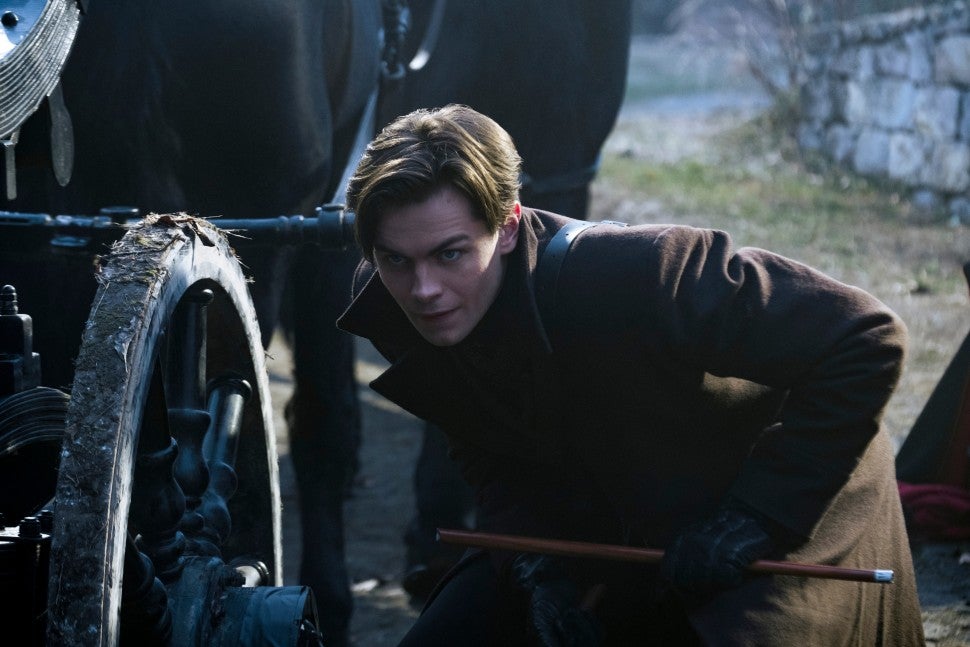 In the Six of Crows duology, Kaz Brekker is a notorious thief living in Ketterdam who leads a crew of the best criminals he can find. He always wears a pair of black leather gloves and readers eventually discover that this is because Kaz hates the feel of human flesh. However, this character reveal was not even hinted at in this first season of TV.

Freddy Carter, who plays Kaz, admitted that he was a bit bummed to see this part of his storyline left out of the first eight episodes. “I sort of kept waiting, because we were getting the script as we were going, so I sort of kept waiting for the big reveal — or just like a little tease, as to why he needs the gloves or why he feels like he can never take them off,” he said.

“So, yes, I hope that we get to find out a little bit more about that, but I love [the gloves],” Carter continued, “Initially, I didn’t love them. The guys will know that I found it really difficult to do anything with them on initially. I’m meant to be the sort of master of sleight of hand and magic, but I’m not quite, but by the end, it softened up really beautifully and they fit like a glove by the end.”

Shadow and Bone is streaming now on Netflix.

For more Shadow and Bone spoilers, press play on the video below to find out everything the cast and creators have told us about Season 2 and which characters and storylines they would like to bring to screen!