If you’re squeamish and scare easily, this week’s episode of Star Trek: Strange New Worlds is the stuff of nightmares. Take it from me, a person who washed their hair with their eyes open for weeks after seeing The Ring in theaters.

Like any day from hell, we begin the freshman season’s penultimate episode on a lighter note, with Pike gathering the crew to promote Ensign Duke to lieutenant and bid farewell to the graduating cadets, including Uhura (who plans to return to Earth).

Their newest mission puts their attention on the U.S.S. Peregrine, whose crew sent a distress beacon and went off the grid. Before that, they were making an emergency landing on a Class-O planet (defined as any planet whose surface is comprised of more than 80% water) called Valeo Beta V.

Pike decides to oversee this mission personally, taking the cadets on one last outing with senior officers while the rest of the crew hangs back on the Enterprise.

The landing party — which includes the captain, Chapel, Spock, Lt. Kirk, La’an, M’Benga, Uhura, Hemmer and Lt. Duke — arrives on the frozen, volatile surface in search of answers. The Peregrine is dark and eerily silent, and there’s blood — already a bad sign. A captain’s log reveals the ship’s crew rescued three captives, not knowing one was infected with Gorn eggs. 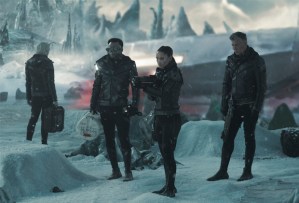 They then encounter a girl and her blue protector nicknamed Buckley. The girl was reported missing two years ago, and she and her companions are likely refugees from a breeding planet.

The crew decides to find any survivors and get out, requiring them to split up into smaller teams. But anyone who’s ever watched a horror film knows that this is a very bad idea. Cue the classic jump scare when Spock sees blood on the floor and is startled by Pike sneaking up on him, M’benga joking that he didn’t realize the Vulcan was so jumpy.

Chapel examines Buckley, who seems to have fallen ill. But he isn’t ill, per se; he’s just carrying Gorn babies. And like a scene straight out of Alien, the demonic offspring burst through his chest and skitter away — one even slaughtering its own sibling. These things are small, feral and deadly.

Let me tell you, the little girl staring at her friend breathing heavily with those evil little eyes and then ducking under the table before all hell breaks loose makes me think she’s Damien from The Omen, because why are all these terrible things happening and she’s not saying anything? I do not trust her.

Lt. Hunt is stuck with Pike, Spock and Kirk, so you know he’s the one about to die. And right on time, those mini demons spring out of nowhere and drag his body into the darkness, his terrified screams filling the air. If I were watching in a theater, this would be the moment I’d collect my purse and speed-walk into a screening of Buzz Lightyear because I cannot deal.

Elsewhere, Chapel sneaks up on La’an, and they realize new Gorn are on the loose. They then find the girl hiding in the cargo hold. It’s the coldest place on the ship and where the creatures would never go. Update: Lil’ Damien isn’t evil, just a scared kid.

Down in engineering, Hemmer and Uhura get the ship back online, and Pike orders everyone to sick bay. But that’s easier said than done with a grown Gorn cornering the engineer and cadet. The creature sprays Hemmer with its venom, but he and Uhura make it to the others.

The crew finds the Gorn hard to track because their biological composition makes them invisible to technology, and not even Hemmer can sense them. Spock is impressed by their adaptive genetic coding, and Kirk berates the Vulcan as a “heartless, pointy-eared computer.”

Spat aside, the team devises a plan to herd the Gorn into one area so they can kill them. As they lure one, Spock realizes the current plan isn’t working and he needs to get aggressive. Tapping into that Vulcan rage, the science officer draws the creature out and into a room with the alpha, where it’s subsequently killed. La’an then lures the alpha into another trap, and they kill it, much to everyone’s relief. 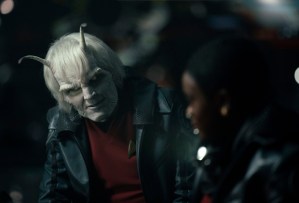 There’s no time to celebrate, however, because Hemmer has been infected. The Gorn reproduce through their venom, and there’s little time to stop what is happening to the Andorian. Realizing what he must do, Hemmer leaves Uhura with one last piece of advice: be open and make a home for herself amongst others, and she will find more joy than sadness. He then leaps off a ledge outside, sacrificing himself to protect his crewmates.

The survivors hold a memorial for the three lost during the mission, including Hemmer, Lt. Duke and Cadet Chia. Spock leaves early, struggling to deal with his emotions. “I can’t control it. I let something out,” he tells Chapel. They hug and share a lingering stare, but Spock walks away before they kiss.

Meanwhile, La’an has found a lead on the girl’s family. It’s out of Federation space, and she wants to pursue it. She requests a formal leave of absence, which Pike agrees to as long as she comes back.

In the episode’s closing moments, Uhura stares at the bridge — specifically, her spot at comms — and it’s clear here that she has decided to stay.

Did this week’s episode of Star Trek: Strange New Worlds make you want to sleep with the lights on? Were you shocked by that death? Sound off in the comments below.