Darryl began his show by inviting TalkTV viewers to call in to share their views on Meghan Markle and why the UK is “obsessed” with her. However, the presenter stepped in to defend the Duchess of Sussex after Valerie from West Lothian launched into a rant about the royal.

Before he took any calls, the host admitted he wasn’t necessarily “pro-Meghan” as he had no reason to dislike her.

He also defended the Duchess of Sussex for the criticism she faced following her and Prince Harry’s tell-all interview with Oprah Winfrey.

“I find it fascinating that you have to be pro or anti-Meghan,” the host began before adding: ” And the honest truth is I have absolutely no feelings towards Meghan. 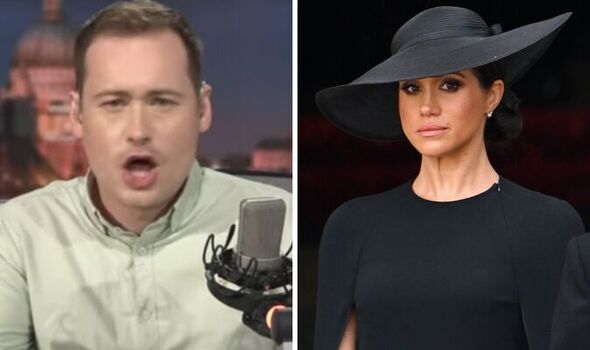 “It doesn’t particularly bother me. I’ve absolutely found some of the abuse she received appalling, especially around the Oprah Winfrey interview, her opening up about how she felt.

“I found it very difficult to stomach, the idea that people would be so dismissive of somebody opening up about how they felt.”

He continued: “Generally speaking, the idea that I would be coming on tonight to be pro-Meghan, in any kind of way baffles me, this assumption that you are either pro or anti-Meghan.”

Darryl proceeded to speak with his first caller Valerie about her thoughts on Meghan.

“It’s not so much about being anti-Meghan,” she admitted as she explained she watched Prince Harry and Prince William’s mum and dad get married.

“Meghan, she doesn’t bring anything good,” the caller continued as Darryl asked her what she meant.

“We welcomed her with open arms because she married Harry,” Valerie added as the host hit back: “Well her argument was that she wasn’t welcomed with open arms.

“You may feel like that, Valerie, and good for you.”

Valerie went on to discuss the Duchess of Sussex’s family life, claiming the royal isn’t happy with hers.

“Just because she doesn’t have her family around her, doesn’t mean to say Harry has to have no family either.”

“Has she said that?” the host interrupted as Valerie replied: “It seems to be that way.”

Darryl went on to point out that Prince Harry reunited with his family when he attended the Queen’s funeral.

Darryl said, trying to stay on topic: “I fall into this trap where I sort of become pro-Meghan, and I end up arguing in favour of Meghan as we try to navigate our way through the reasons why the UK are obsessed with Meghan.

“What it seems like you’re telling me, Valerie is that in your mind you feel as though she has changed the dynamic of the institution.”

Valerie continued to launch into another rant about the Oprah Winfrey interview, claiming Meghan said she didn’t know who Harry was.