English filmmaker Terence Davies, from painting working-class portraits to sketching urbane artistic figures like Emily Dickinson, has long been public about his discomfort with being gay and his feelings of banality toward life in general. He’s not an especially hopeful storyteller, from the closeted anguish of a Liverpool boy in “The Long Day Closes” to the suicidal Hester Collyer’s unquenchable thirst for passion in “The Deep Blue Sea.”

His pessimistic but searching sensibilities, always hungering for a redemption or answer that can’t be found and then resigning to that lack, find their purest expression in “Benediction.” The riotously well-penned but deeply despairing film is a portrait of World War I-era English poet Siegfried Sassoon, who lived a comfortably gay shadow life on the fringes of the Bright Young Things, settled into marriage in middle age, and died a late-minted Catholic, bereft, in 1967. He outlived many of his peers, including the poet he loved named Wilfred Owen who died in the war, but not Stephen Tennant, the socialite flaneur he had a rocky on-and-off affair with for years.

Sassoon is played by Jack Lowden, who elegantly embodies a disillusioned man’s artistic journey, and is given a one-take final shot that would make “Call Me By Your Name” jealous. He breaks up, breaks down, picks himself back up, only to fall down once more, again, again, as “Benediction” explores his many mercurial relationships with men. Here, they include the gorgeous, manipulative Welsh musician Ivor Novello (Jeremy Irvine), flittering Tennant (Calam Lynch), and kindly actor Glen Byam Shaw (Tom Blyth). It’s not a biopic so much as a melancholy what-might-have-been-but-never-will-be melodrama that freely plucks incidents from the poet’s life and plays around with them in time — and it’s filled with silver-tongued zingers and maxims that only Davies could devise. “We are unique only to the people who really loathe us.” “Marriage: The ultimate capitulation.” “How was Bavaria?” “Bavarian.”

In essence, it’s Davies’ gayest movie and certainly his most florid. Sassoon’s poetry is woven into the film subtly, but Davies doesn’t try to recreate the project of writing in cinematic terms. That would be, as the filmmaker explained in an interview with IndieWire, frankly boring.

As usual, he closely identifies with Sassoon’s slouching path toward salvation, and the inherent egotism and insecurity of being an artist. Davies’ protagonists are almost always Davies stand-ins, and he’s not shy about that. But that doesn’t mean he’s necessarily working out his issues. As Sassoon says in the film, “The moment passes, but the hole remains.”

This interview has been edited for clarity and length.

IndieWire: There’s a line in the movie where I thought, “This is completely you.” The older Siegfried is asked by his son, “Why do you hate the modern world?” And Siegfried says, “Because it’s younger than I am.”

Why would you want to become a Catholic for God’s sake? I was brought up Catholic. It’s a pernicious religion. I don’t know why people are drawn to it. But I think he was drawn to poetry. A lot of gay men in this country were very privileged. They got away with it, and they usually married, but then that didn’t work. He goes to religion. That doesn’t work either.

What is sad is that he couldn’t have chosen worse people to live with. The men are cruel and narcissistic. The only person who really loves his work is Wilfred Owen, and that’s never consummated. It’s a pure love. I think it might have been different had he found a pure love like that. That’s what happened with [poets] Rupert Brooke and Wilfred Owen, because they were killed [in World War I], and that gives them a cachet which he couldn’t compete with to a certain extent. He was always number three, and I think he was aware of that. He wrote very fine poetry after the war, but he is living in their shadow because he survived with the necessary guilt and a little envy, I think. 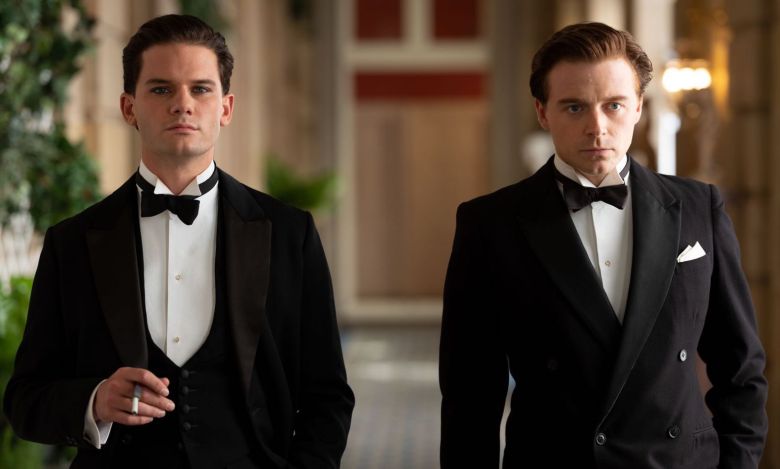 Sassoon feels such a futility toward life but is so easily devastated by breakups with two people in particular, Stephen Tennant and Ivor Novello, who didn’t really deserve him.

Ivor was very cruel and not a pleasant man. Stephen was just a complete narcissist. He ended up putting on a lot of weight, losing his hair, and what hair he had he dyed orange. He stayed in bed all day drawing pictures. Ivor Novello had a heart attack in 1951 and by 1960 had been completely forgotten. Perhaps like George Amberson Minafer [the protagonist of Orson Welles’ “The Magnificent Ambersons”], they got their comeuppance.

As a 32-year-old gay man, I will say the personality types of Stephen and Ivor are extremely recognizable and even contemporary. Ivor is this sort of bitchy queen, while Stephen is this narcissistic, ineffectual fop. They’re both predatory in their conquest for good-looking men, yet they also have a lot of wit.

When you are gay, you come into that orbit. A lot of gay men are very funny, but they’re also very cruel as well because of the obsession with beauty and youth, which goes. It just disappears like everything else. It can be very entertaining, and I didn’t want it to be solemn. I wanted it to be funny but also bitchy as well. But their function was to show just how vapid a lot of them were. And that’s true today. A lot of gay life is vapid, but one would also have to say a lot of heterosexual life is equally vapid. There’s no difference anymore.

What do you think drew him to men like Ivor Novello and Stephen Tennant? There’s a soul lacking there that Siegfried had more of.

Certain people fancy the people who don’t fancy them, and the people who do fancy them, they don’t. It’s a conundrum. That’s true in the heterosexual and the gay world. They were obviously physically very beautiful. The early photographs of Novello — he does look like a film star. I can’t understand where Stephen Tennant is concerned because in the only photographs of him, he looks like a woman. And in fact, he looks very much like Hester [Sassoon’s eventual wife], which is telling.

These characters allow the movie much of its delicious dialogue. There are so many aphorisms turned on their heads and twisted barbs that take on this urbane Wildean quality, where you know the social gamesmanship at play underneath.

I did want it to be fun. Gay men are bitchy, but funny, like women in northern Britain. I wanted it to be that, but when you admire but deplore that kind of privilege, you want to show it at its best and worst. It’s very nice to make people laugh or be made to laugh. It’s very beguiling. If someone does that, it’s like casting a spell. 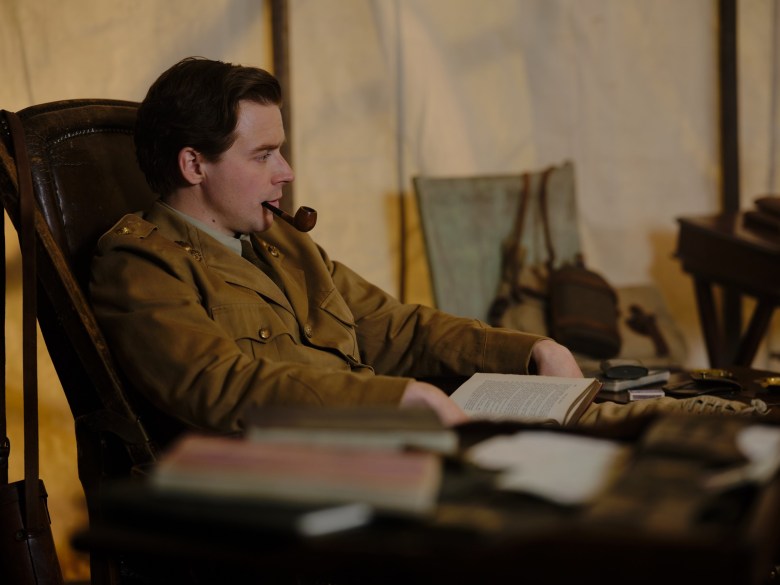 You’ve always been candid about how the gay experience has failed you. Do you feel like you worked any of that out with “Benediction”?

No. It comes into the making of it, but it doesn’t really work it out. The problem is that I went on the gay scene for a very short period of time. I’m not good-looking, and I wasn’t attractive, and end of. You’re a non-person. That two months, I just couldn’t live like this. The level of cruelty and sexual venality — I just couldn’t bear it.

So I became celibate, and it was easier because I’m not driven by that. I left school at 15. I was driven by wanting to have knowledge. That’s what drove me, not sexuality. I was aware of it but it was not the most important thing in your life. When you’re not good-looking, it’s that much easier to say, “Fine, I’ll take up embroidery.”

Siegfried has a close bond with a doctor at the hospital he’s shipped off to under the premise of being mentally unwell, when in fact he was just a conscientious objector. He tells Dr. Rivers that he feels like his poetry is mere “egotism.” Isn’t all art-making inherently egotism?

When you write anything, you’re saying, “This is important to me and it would be nice for it to be important to you.” But where does it cease to be egotism and become self-importance? I don’t know where one ends and the other begins. When you see [the self-important] part of art, it’s never pleasant, especially when you think you’ve lost something that can’t be lost. There’s always inevitably egotism there because that’s what we are, and you can’t not express it. If you just merely imitate things that had a bigger effect on you, it’s just poor imitation. If that influence comes out of you unconsciously, refracted, that’s interesting. But you’re absolutely right. There is, at the end of the day, an element of, “Look at me, aren’t I important?” And the answer is you’re not.

You’ve said you don’t really go to the movies anymore. Is sheltering yourself informative in any way?

I don’t see that many films now because you can’t watch it with innocent eyes. You’re aware of the music, the camera, the acting, the art direction. You can’t watch anything with clear eyes. There is a part of me that, yes, I wish I could just say, OK, fine, I’ll do that for the money. But I can’t because I wouldn’t know where to put the camera. I wouldn’t know what to do. If I were asked to make “Fast and Furious 29,” it would come out slow and slightly irritable. That’s not foot-tapping, is it?

I shall tell other people that you said that.

Do you feel a sense of finality when your movies are finished, and do you rewatch them?

No, because once it’s finished, it doesn’t seem to be part of me anymore. I do think “Benediction” is the best thing I’ve done because of the commitment from everyone. It ceases to be my film; it becomes ours. Once they’re finished, they’re no longer part of me. I never watch them again because you see them so often in the edit. If I want to think of a sequence, I can just think of it, because I’ve seen it so often. It becomes no longer part of you, in an odd sort of way.

“Benediction” is now in theaters from Roadside Attractions.