‘The Broken Hearts Gallery’ Review: A Star Turn Leads This Slick Fantasy About a Messy Breakup

“Breakups,” as millennial comedian Cat Cohen once said, “are cool because it’s like you have a best friend and then they die.” What do you do after the end of the affair to memorialize what was, and what now isn’t? Natalie Krinsky’s  romantic comedy “The Broken Hearts Gallery” doesn’t quite get at the psyche-shattering, soul-reconfiguring effects of a breakup — the exhausting burden it casts on your friends, the face-melting substance abuse, the self-doubt, the social-media stalking in the aftermath. Don’t forget the vomiting.

But what this sweet, fleet-footed little trifle does capture is how to start a whole new you after you and me is no more. This certainly makes for an overly idealistic experience, but “Broken Hearts Gallery” is a far-cry from the algorithm-driven uncanny valleys of romantic human behavior as seen on Netflix’s versions of the same kind of film, and it features a totally delightful turn from Geraldine Viswanathan as the central brokenhearted who hatches an enviably creative way to move on.

Lucy Gulliver (Viswanathan) is a 20-something living in (where else but) Brooklyn working at (where else but) an elite gallery space, navigating the tricky waters of (what else but) dating life as a millennial in New York City. She has a solid support system of fast-talking, equally existentially adrift roommates, Nadine (Phillipa Soo) and Amanda (Molly Gordon). Lucy has a rich, handsome boyfriend, Max (Utkarsh Ambudkar), with a place in the West Village (but unfortunately an almost-topknot that really needs to go).

That all comes crashing down when Lucy learns Max is really dating a fancy lady who’s just returned from Paris and can’t stop saying “Bonjour!” Lucy, tragically, learns this while introducing Max at an event at her gallery of unemployment, run by the imperious and envied Eva Woolf (a perfectly cast Bernadette Peters), and drunkenly sobs her tale of woe into the microphone. This debasing spectacle costs Lucy her job, and her relationship, and when she arrives home a mess, her roommates are quick to literally mobilize with bottles of wine and a copy of “Eternal Sunshine of the Spotless Mind” on DVD.

It turns out that, all this time, Lucy has been a bit of an emotional hoarder. In her cluttered bedroom, she’s buried herself in souvenirs from relationships past. “It was like hooking up in a mausoleum,” one ex tells him when she tries to offload his stuff. It’s all a little creepy. But coincidentally, she keeps running into Nick (Dacre Montgomery), the handsome guy she mistook for an Uber driver the night of her big blowup at the gallery. 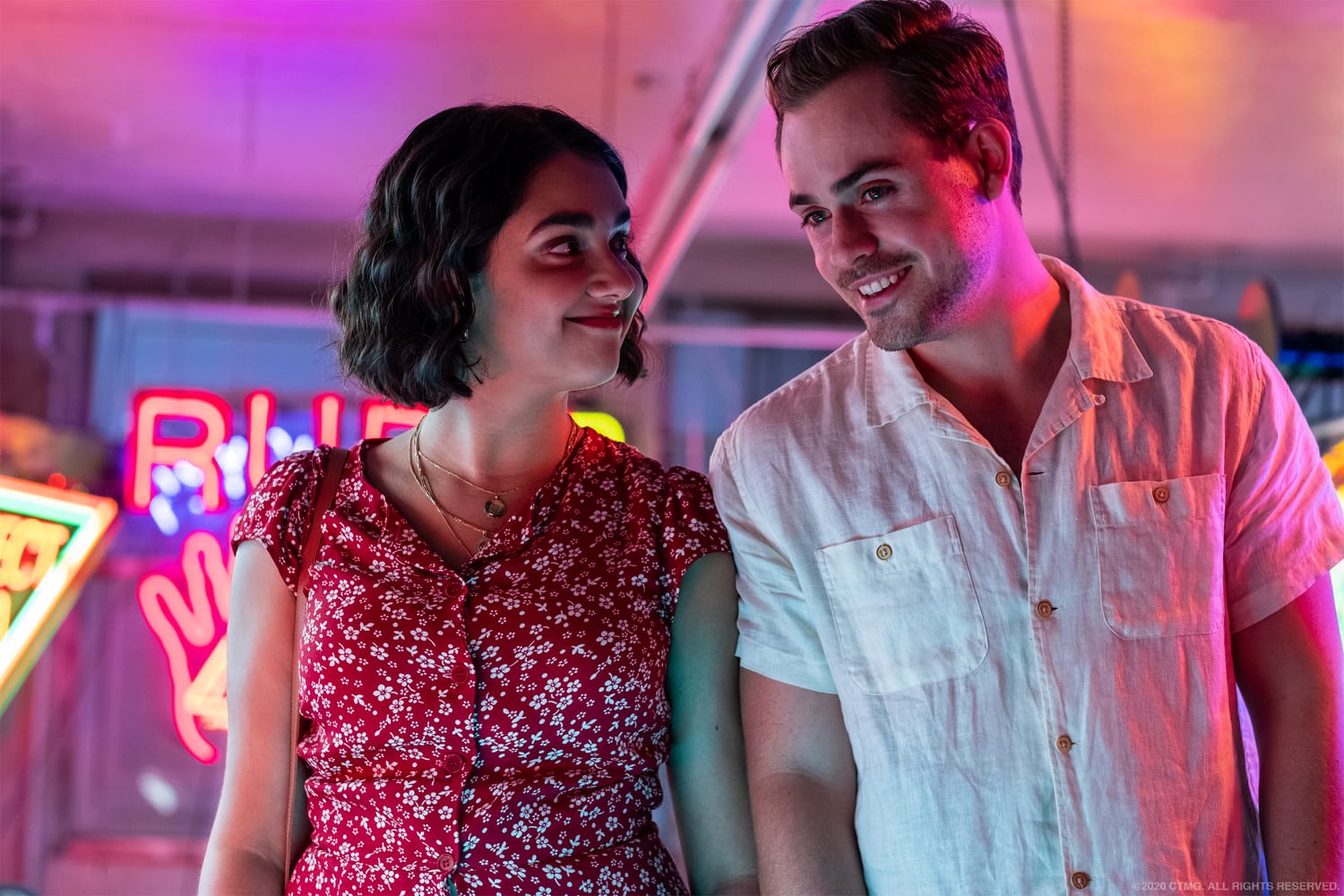 Audiences can see where this is all heading from outer space, and “The Broken Hearts Gallery” doesn’t try to get around the fact that it’s utterly predictable, which is a plus. Max is trying to open a boutique hotel — ominously named The Chloe, for a reason we discover later — but without the necessary cash, he’s right now sitting on the empty space. Lucy decides to turn it, in the meantime, into the Broken Hearts Gallery, a museum of people to bring unwanted artifacts from broken relationships. (There is, in fact, something just like this in Los Angeles called the Museum of Broken Relationships.)

Lucy’s neat idea ushers some colorful supporting characters into and out of the movie with their sad, sometimes pathetic, sometimes funny stories of their various attachments to objects from relationships past. (Hollywood, please hire Megan Ferguson for more work.) But as Max starts to sneak back into the picture, and Lucy is clearly growing attracted to Nick, who is clearly growing attracted to her as affirmed by the moment he lures into the secret bar he’s built in his (what else but) loft apartment for a nightcap, things are about to get messy.

But worry not. All will be resolved in this tidy picture. “The Broken Hearts Gallery” is pure glossy fantasy, though Viswanathan’s puckish and self-deprecating performance suggests a greater mess waiting to break out of this slick offering. (For all its sleekness, Alar Kivilo’s cinematography deftly captures the patchwork textures of Brooklyn.)

That’s not to say the film by Krinsky, making her feature debut after a writer on shows like “Gossip Girl” and “Grey’s Anatomy,” is phony. The emotions, and Lucy’s troubles, are very real. “Broken Hearts” just doesn’t quite hit the marrow of life during the free-fall after a breakup, and the film also never manages to make us feel whatever Lucy appears to have felt for Max, who isn’t all that appealing and mostly comes off as a tech-bro douchebag. But we’ve all been there, haven’t we? “The Broken Hearts Gallery” will fit snugly on the shelf for tweens and teens as a source of comfort and maybe even empowerment, an ode to rebuilding, when the dissolution of a relationship leaves you feeling like a husk of yourself.

“The Broken Hearts Gallery” will open in select U.S. markets on Friday, September 11 from Sony Pictures.

As new movies open in theaters during the COVID-19 pandemic, IndieWire will continue to review them whenever possible. We encourage readers to follow the safety precautions provided by CDC and health authorities. Additionally, our coverage will provide alternative viewing options whenever they are available.