Home » TV & Movies » 'The Masked Singer' Reveals Another Contestant: And Broccoli Is…

'The Masked Singer' Reveals Another Contestant: And Broccoli Is…

Ten competitors down, six to go 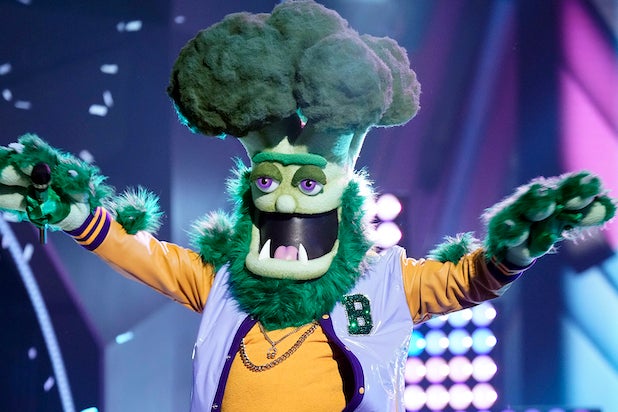 (Warning: This post contains spoilers for Thursday’s “The Masked Singer.”)

“The Masked Singer” aired on a special night this week as a Thanksgiving treat from Fox, but the end of the episode was the same as always: another contestant eliminated and unveiled for fans at home.

On tonight’s Turkey Day installment of “The Masked Singer,” Group C competitors Broccoli, Jellyfish and Mushroom performed to see which two would get slots in the “Super Six” showdown alongside Group A’s Popcorn and Sun and Group B’s Seahorse and Crocodile.

After those hidden celebs performed, it was time for panelists Jenny McCarthy, Nicole Scherzinger, Ken Jeong and Robin Thicke, as well as guest judge Jay Pharoah and “The Masked Singer” super fans voting from home, to pick their favorites. They chose Jellyfish and Mushroom, which meant Broccoli was deemed the weakest performer and unmasked.

According to Fox, those 16 contestants — but 17 celebrities, because of the Snow Owls — combined “have sold more than 281 million records worldwide, appeared in more than 5,120 episodes of television and 204 films, appeared in five Super Bowls, have four stars on the Hollywood Walk of Fame, one Academy Award nomination and one of Time Magazine’s 100 Most Influential People.”

Next up, the remaining contestants from Groups A, B and C will come together for the first time for Season 4’s “Super Six” episode.