The Wonder Years Is a Charming Reboot for a New Generation

It’s been almost 35 years since audiences first sat down with the Arnolds, an all-American family living through the turbulent 1960s and ’70s. For viewers of the time, the 1960s still had a magic and allure that appealed to adults. It’s also a great example of why a reboot was worthwhile. For white audiences, that era means one thing, but for Black families the 1960s meant something else entirely. And it’s something creator Saladin K. Patterson isn’t shying away from in the new iteration of ABC’s “The Wonder Years.”

Set in Montgomery, Alabama during the late ’60s, this version of “The Wonder Years” follows Dean Williams (Elisha Williams), a fairly typical middle school student, albeit one whose life is narrated by Don Cheadle as a grown-up version of our young protagonist. Dean’s upbringing is a simple one but considering the time and place, he’s headed toward some of the most tempestuous elements of the decade that would define the Civil Rights Movement.

There’s a lot of commonalities to other ABC sitcoms set in the past, most specifically “The Goldbergs.” Like that sitcom, “The Wonder Years” also has an older version of the main protagonist telling the story, but this has a slightly more serious edge. The first two episodes deal with the assassination of Dr. Martin Luther King, Jr. and what makes the show both informative and refreshing is how it handles serious topics in a way that can still provide levity. In this case, Dean is struggling with the discovery that his best friend kissed the girl he likes but everyone else, from his teachers to his father, Bill (Dule Hill), believe Dean is sad about Dr. King.

The show confronts what we now know as microaggressions and discussions of racism in America. The Dr. King episode sees Dean receive sympathy from his white teachers (where he’s one of a handful of Black students) while also being told to do a project on the civil rights leader to “educate” his white classmates. A grown Dean himself questions the racism of those around him, saying that, while their actions might have been unintentional, they are still racist.

Within the first three episodes, the series hits on a lot of different topics, not all of them as serious as Dr. King or Dean’s older sister Kim (Laura Kariuki) interacting with the Black Panthers. But the addition of these issues shows the power of keeping “The Wonder Years” within the same time period as the original. The series illustrates how the ’60s were a halcyon time, for sure, but for Black families, there was so much added weight that white families could ignore. A fishing trip between Dean and his father sees Bill give a powerful speech about the anger and frustration he has in the wake of Dr. King’s death, and how white people could look past it. 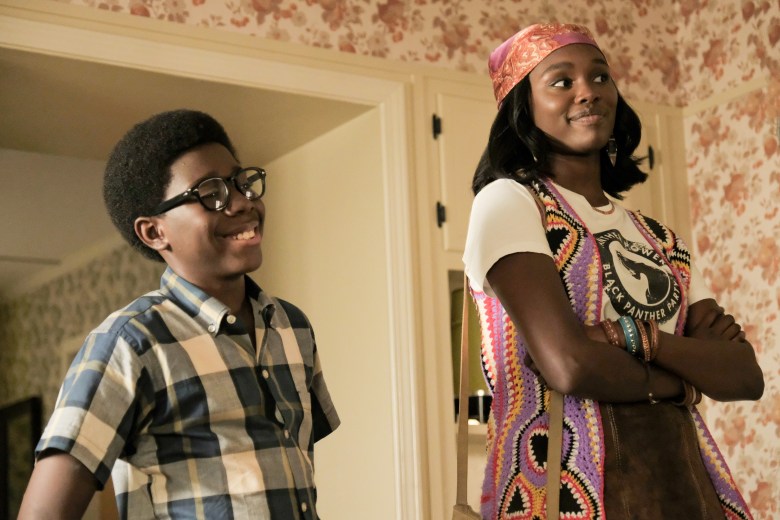 But “The Wonder Years” is equally affecting in moments that just make for good sitcom entertainment. Episode 3, entitled “The Club,” is one of the funniest episodes of the first three and might be one of the most hilarious episodes of TV this year. Dean and his friends discover nude magazines which leads to his mother, Lillian (Saycon Sengbloh), giving Dean a sex talk that also includes how couples can find intimacy in different ways. It’s a wholly different discussion about sex and porn than I’ve seen on other sitcoms, particularly aimed at young boys. Cheadle’s narration throughout the episode is perfect, but the discussion between mother and son adds such depth and complexity to both characters.

Fans who remember the earlier series might be wondering if there’s a similar romantic element like Kevin (Fred Savage) and Winnie (Danica McKellar), and that is being set up here. Dean’s love for good friend Keisa (Milan Ray) gives off Kevin/Winnie vibes, but there’s not a grand desire to push that right now. Odds are the show will take its time letting that develop and, honestly, the series works just fine without it. Young Elisha Williams, though, is so darling as Dean, as is Ray’s Keisa. Both children have such an effortlessness to them, especially Williams who has to spend nearly every episode walking into potentially embarrassing situations.

“The Wonder Years” is a delightful series that should appeal to both fans of the original series as well as a new generation who have never watched the show. Williams, Hill, Sengbloh, and Kariuki have a wonderful chemistry, and they could very well be on their way to becoming the next great American television family.

“The Wonder Years” airs new episodes Wednesdays at 8:30 p.m. ET on ABC. Episodes are available to stream the next day on Hulu.