'Traumatic' Bachelor task where contestants are pelted with eggs unearthed

Footage has emerged showing The Bacehlor US contestants throwing eggs at one another in a task a former participant has described as ‘abusive’.

The clip, which aired in 2011 on Bachelor In Paradise’s predecessor Bachelor Pad, featured the cast painted with a black and white target on their back before the ‘least attractive’ of them were highlighted with a splatter.

We wish we were making this up, but this happened on TV.

However, one contestant in particular – Erica Rose – has spoken about being singled out by copping the brunt of most of the eggs from the men.

Rose, who competed on the 2006 season of The Bachelor with Lorenzo Borghese before being eliminated in week three, was one of the women who took part in that task on Bachelor Pad.

Appearing on the Unpopular podcast, host Jacques Peterson recalled the task which showed the competitors being lined up in swimwear, while blindfolded, as their potential romantic partners lobbed eggs filled with paint at those they felt were the least attractive, or who they wanted to leave the island.

The guys had their turn being pelted with eggs by the women, however the hits were aimed at several men as opposed to Rose who copped most of the eggs the men were given for the ladies – with one dubbing her back a ‘Picasso’. 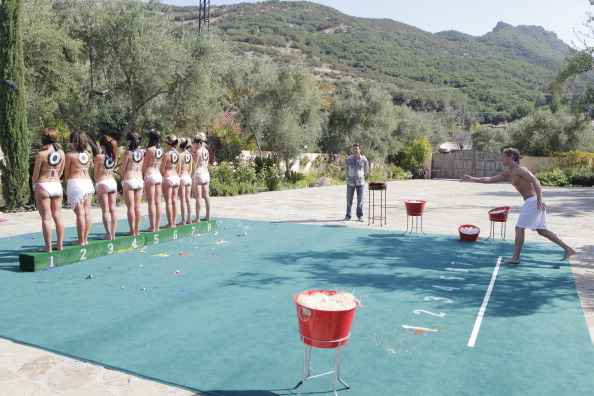 As Peterson said he believed it ‘may be the worst challenge in reality TV’, Rose likened it to abuse and said the cameras didn’t show her storming off.

She said: ‘It really hurt, so that’s when I was like, “Ow, I don’t want to do this anymore”. Emotionally it was traumatic. Physically, that f**king hurt.’

Rose added: ‘They cut some of it down, but I walked off and I was like I don’t want to do this anymore. This is abusive. It’s not just my feelings are hurt, but that f**king hurt.’

The clip – which is still available online – shows Erica taking the brunt of the eggs by the various male contestants, as she revealed the trauma in a separate confession.

According to Rose, however, host Chris Harrison, who recently departed the franchise, offered her unhelpful advice.

She claimed: ‘At the time, Chris Harrison said to me, which I’m sure he was told to say, “If you don’t finish this challenge and let the eggs get thrown at you, you’re going to be eliminated”.’

Rose, who stars on Below Deck Sailing Yacht, added: ‘They did tell the guys you can’t throw it this hard.

‘The point of the game wasn’t to injure people. It was to humiliate them, I guess.’

Erica claimed she reached out to The Bachelor creator Mike Fleiss for an apology over the horrific game last year.

She said he responded in a text, claiming he said he was ‘sincerely apologetic’ for the ‘tasteless and wrong’ task.

The Bachelor, us tv news
Celebrities