The Rise of the Clans

It's not quite as much fun as Outlander (and there's certainly less explicit sex) but anyone captivated by Diana Gabaldon's dip into Scottish politics circa 1700 will be equally engaged by the crazy shenanigans of the 14th and 15th century. This episode looks at the struggles of the Stewarts and the establishment of the first real Royal house of Scotland – a struggle worthy of Game of Thrones. And it's presented by Neil Oliver, who delights us not just by recognising the human stories embedded in historical fact but by saying things like "rrrrroyal", "Rrrrrobert" and "brrrrroadsword" a lot. 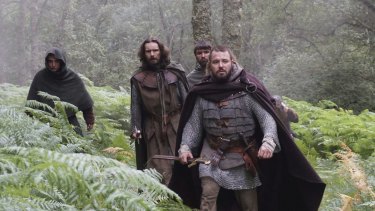 Robert the Bruce leads his guerrilla army through the forest in Rise of the Clans.

A show from Dick Wolf (Law & Order) never leaves you wondering. Everything's played broad. Heroes and villains are clearly delineated. And characters love peppering their conversation with factoids of absolutely no interest to anyone but us, the audience. At the same time, Wolf and his team can put together these procedurals in their sleep. In a good way. Both stories in tonight's double episode move along at a terrific clip, with plenty of satisfying twists and turns and sudden spurts of violence that'll have you leaping in your seat. Plus, Julian McMahon cameos in what we hope will be an ongoing guest role.