Incredible drone footage shows crater caused when 500lb WWII bomb exploded in German field – as town near Frankfurt is evacuated after two more bombs are found, one dropped by Nazis

Incredible new drone footage has emerged showing a 33-foot wide and 13-foot deep crater left by a Second World War bomb in Germany, as the discovery of two others forced the temporary evacuation of some 2,500 people.

A 550-pound (250-kilogram) German bomb and a 110-pound (50-kilo) American one were discovered close to each other during construction work at an industrial zone in east Giessen, some 30 miles north of Frankfurt, on Monday.

Police said the US explosive was successfully deactivated but the German bomb had to be detonated as its condition was too degraded to be safely defused.

At 11.15pm on Monday a controlled explosion was carried out on the German bomb, which Twitter users reported could be heard from far beyond the city. 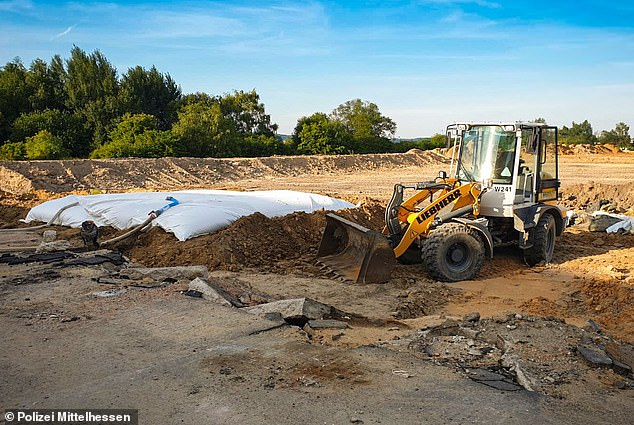 The German bomb may have been dropped in the struggle during the Allied advancement in the area, a city spokeswoman told Hessenschau news service.

The American army entered the city on March 27, 1945 – six months before the end of the war and set up a military base that remained until 2007.

Around 2,500 people, including 800 refugees at a reception centre, were briefly evacuated from their homes before the explosion on Monday and several roads and highways were closed.

According to the city of Giessen 60 police officers, 60 firefighters, 120 Red Cross officers and 40 Public Order officials were in action. Police helicopters controlled the area.

World War II bombs have frequently been found on the site in the past, most recently in early April, when 500 residents had to leave the zone.

The high concentration of bombs has been attributed to fact that the site was a German army airfield during Nazi rule.The city was also a target due to its railway facilities and military installations.

Almost the entire historic centre of Giessen was destroyed in a devastating British bombing campaign in 1944 and hundreds of civilians were killed.

Nearly 75 years after the end of the war, Germany remains littered with unexploded ordnance. Experts say around 10 percent of the millions of bombs dropped on Germany during the conflict did not explode.

The day before the Giessen bombs were discovered, another Second World War bomb self-detonated in a field in western Germany, leaving a 33-foot wide and 13-foot deep crater. 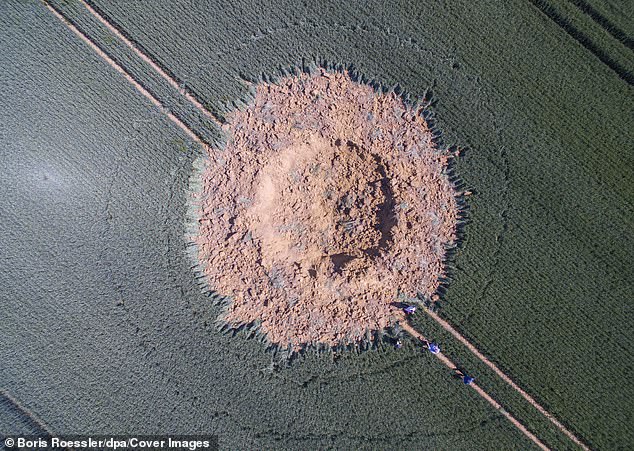 A Second World War bomb exploded in a field near Limburg on Sunday, creating a large crater in the ground

Residents in Limburg-Ahlbach reported hearing a loud explosion and feeling a blast just before 4am, which according to local media reached 1.7 on the Richter scale.

Police said that the crater was discovered on Sunday afternoon and there was no indication it was caused by farm machinery or other tools. 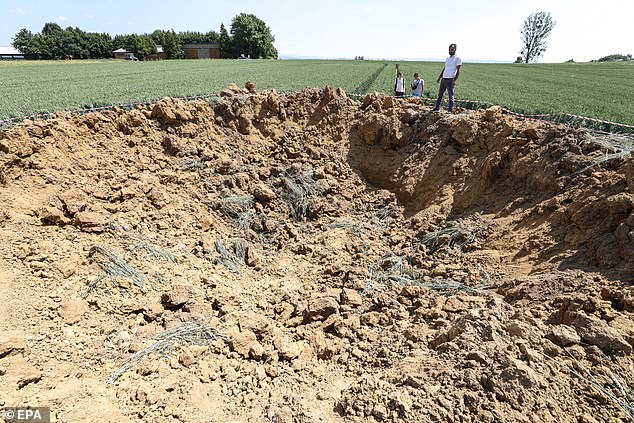 A local government spokesman in the nearby city of Darmstadt told Bild it is believed the bomb had a chemical-based delayed timer which could have finally decayed, triggering the explosion.

Limburg was repeatedly bombed during the Second World War as the Allies were intent on destroying its important railway junction and marshaling yard.

City spokesman Johannes Laubach told German news service NTV that this made finding a Second World War bomb there was not altogether surprising.

‘A former railway depot made this area a bombing target at the end of the war,’ he said. 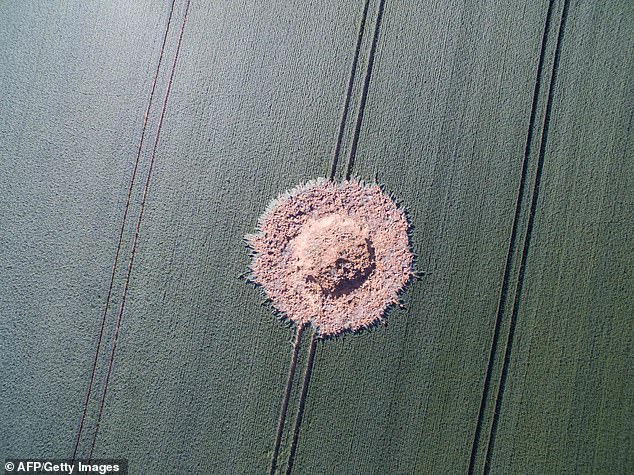 An aerial view shows a crater on a barley field near Limburg-Ahlbach, western Germany on June 24, 2019 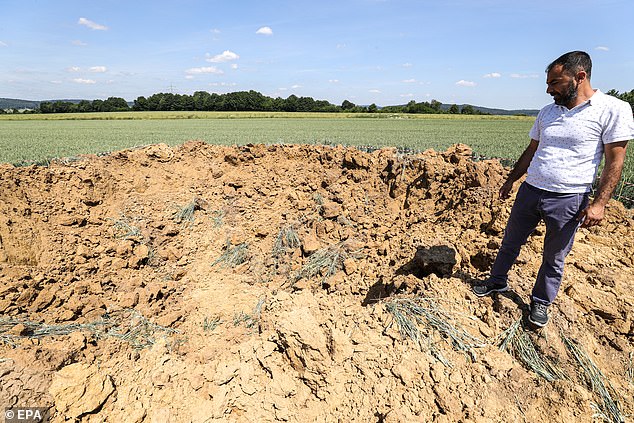 According to the BBC, explosive ordnance demolition teams who examined the crater determined that bomb was a 551-pound aerial device dropped by the Allies.

Popular Mechanics reports that it was likely a M43, AN-M43, or AN-M64 general purpose bomb.

General purpose bombs dropped at terminal velocity can penetrate up to four building stories before detonating, which would explain why the bomb was so deep underground.

According to Popular Mechanics, the M65 bomb was five feet long, 14 inches wide and packed with 280 pounds of TNT.