Home » World News » A close shave for teetering US democracy

A close shave for teetering US democracy

American democracy teeters on the brink of collapse. The removal of Donald Trump didn’t fix the problem. But it did give Joe Biden and the Democratic Party a chance to begin repair work.

After a frustrating year and three days since being elected, Biden got hold of his first big repair kit on Saturday (Australian time). It’s a $US1.2 trillion brace of money for America’s second-rate infrastructure. 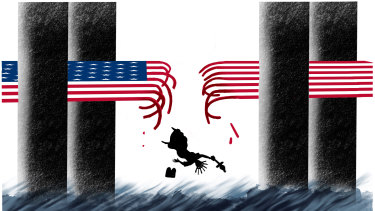 “This is a once-in-a-generation investment that will create millions of jobs and puts us on a path to win the 21st century,” said Biden. “This is a blue-collar blueprint to rebuild America.”

Political hyperbole to one side, it is, at least, a federal infrastructure bill, and America hasn’t had one in a decade. Trump talked a good game but delivered nothing more than an unfinished wall.

It’s a prerequisite for fixing American democracy. Because it was the anger and the hopelessness of the low-income towns and communities – the ones in “flyover America” – that prepared the way for a political movement of Trumpian destructiveness.

“What many don’t understand,” said the main explainer of Trump’s appeal, J.D. Vance, author of Hillbilly Elegy, “is how truly desperate these places are, and we’re not talking about small enclaves or a few towns – we’re talking about multiple states where a significant chunk of the white working class struggles to get by.”

He described a social catastrophe. Communities devastated by rampant heroin addiction, by broken families that keep breaking, by endemic crime as a way of life. “And on top of that is the economic struggle, from the factories shuttering their doors to the Main Streets with nothing but cash-for-gold stores and pawn shops. The two political parties have offered essentially nothing to these people for a few decades.”

Trump didn’t offer a despairing working class real solutions. But they weren’t really expecting any. His appeal? “His apocalyptic tone matches their lived experiences on the ground,” said Vance.

A poll last week by the non-partisan Pew Research Centre found that 31 per cent of American adults still believe that the presidential election that Biden won fair and square was “stolen” from Trump. This includes 68 per cent of Republican voters. And among the Republicans, three in 10 said violence might be needed to put the country back on track.

Among the Republicans, three in 10 said violence might be needed to put the country back on track.

An infrastructure spending spree won’t solve their problems or defuse their anger. But it’s a prerequisite for the systemic improvements that can. Part of the $US1.2 trillion is designated for traditional infrastructure over 10 years.

Such as $US110 billion for roads and bridges, $US55 billion for improving water supplies and replacing lead pipes, $US60 billion for modernising the power grid, and $US66 billion for railways, more than the total combined rail funding for the past 60 years, according to Bill Flynn, chief of the interstate rail system, Amtrak. About half the money for Amtrak will go to building new lines to connect cities that are unconnected by rail today.

There’s also lots of money for newer varieties of infrastructure including $US65 billion for extending high-speed internet broadband, $7.5 billion for electric-vehicle charging stations and some $US50 billion for “climate resilience”, including dealing with fires and storms.

The infrastructure bill almost didn’t happen. Not because the Republicans were blocking it but because Biden’s own party was fighting with itself. It was a factional divide. The moderate or centrist Democrats in the House of Representatives wanted the bill put to a vote and passed as soon as possible. Because it funds essential public services, some moderate Republicans were prepared to support it too.

The progressive or left faction of the Democrats wanted it put to a vote simultaneously with a separate spending bill, what Biden calls the Build Back Better bill. Build Back Better is another Biden priority and even more costly than the infrastructure package. Its final size is unknown but it currently contains measures worth $US1.75 trillion – $US555 billion for renewable energy and climate-related investments, $US400 billion for universal pre-school and childcare, more than $US200 billion for health spending, including aged care, and $US100 billion for affordable housing and school meals.

This Building Back Better package is also known as a “safety net” bill by Democrats. To Republicans, it’s a “socialist re-engineering” of America. It enjoys no Republican support.

United, the two Democrat factions command a House majority. Divided, they don’t. Why did it matter whether the bills were put together or separately? Because the left Democrat group wanted the less popular $US1.75 trillion Build Back Better bill to pass on the coat-tails of the infrastructure bill. Twice, Biden went to Capitol Hill to lobby the left to let the infrastructure bill pass first. Twice, scheduled votes were cancelled. Biden was stymied.

Then came a jolt at a range of state and district elections last week. For the Democrats, “a defeat so comprehensive and disastrous does not leave room for excuse-making, blame-shifting or evasion,” wrote The Washington Post’s stalwart Democrat, EJ Dionne. “President Biden and his party can respond with urgency, or they will surrender the country to a Republican Party still infected by Trumpism.”

The result? Biden and the House Speaker, the Democrats’ Nancy Pelosi, responded urgently. They arm-twisted enough of the party’s left congress members to get the infrastructure bill through on Saturday. But, incredibly, six of the Democrats’ left faction voted against it in an act of petty political vanity. Their pet Build Back Better Bill remains pending.

The infrastructure bill passed only because some moderate Republicans voted for it. Sixteen of them, in the event, saved the day, the infrastructure bill’s lifelines for Americans, and the President’s program. American democracy still teeters on the brink of collapse. But it lives another day.

The Opinion newsletter is a weekly wrap of views that will challenge, champion and inform. Sign up here.