A pod of ‘crazy’ killer whales is launching coordinated attacks on boats, terrifying the sailors and baffling scientists 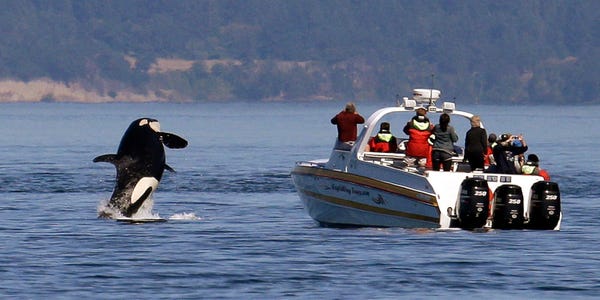 Killer whales are ramming and harassing sailboats traveling along the Spanish and Portuguese coasts in a series of attacks that have left scientists baffled.

Sailors traveling along the Strait of Gibraltar to Galicia have sent numerous distress calls in the last two months, with reports of boats losing part of their rudders, crew members sustaining bruises, and ships having to be towed away because of serious damage.

In one instance, a 46-foot delivery boat was surrounded by nine orcas off Cape Trafalgar in Spain. The whales, that can weight up to six tons, rammed the boat continuously for one hour, causing it to spin 180 degrees and the engine to shut down, according to crew member Victoria Morris.

Morris told the Observer that the attack, which happened on July 28, felt "totally orchestrated."

"The noise was really scary. They were ramming the keel, there was this horrible echo, I thought they could capsize the boat," Morris said. "And this deafening noise as they communicated, whistling to each other. It was so loud that we had to shout."

The orca pod had left by the time help arrived, but the boat still had to be towed to a nearby town called Barbate. Crew members later found the rudder missing its bottom layers and teeth marks along the underside of the ship.

Several days prior, a man was motor sailing alone off Barbate when he heard a sound "like a sledgehammer" and saw his wheel "turning with incredible force." Nick Giles told the Guardian that his 34-foot Moody yacht spun 180 degrees as he felt it lift up.

Giles said he was pushed around without steering for approximately 15 minutes.

"The boat lifted up half a foot and I was pushed by a second whale from behind," he said, according to the Observer. While the sailor was resetting the cables, the orca hit again, "nearly chopping off my fingers in the mechanism."

In a similar instance, a crew member from another delivery boat near Barbate told the port authority said the force of the orcas hitting the ship "nearly dislocated the helmsman's shoulder and spun the whole yacht through 120 degrees," according to the Observer.

Researchers say that it is not unusual for orcas, who are highly social and curious animals by nature, to follow boats or even interact with the rudder as a form of play. However, it is unnatural for them to become aggressive.

"For killer whales to take out a piece of a fiberglass rudder is crazy," Rocío Espada, who works with the marine biology laboratory at the University of Seville and has observed this population of orcas in the Gibraltar Straits for years, told the Observer. "I've seen these orcas grow from babies, I know their life stories, I've never seen or heard of attacks."

It is not known if all the encounters involve the same pod, but it is probable, said Dr. Ruth Esteban, who has also studied the Gibraltar orcas extensively. Esteban thinks it unlikely two groups would display such unusual behavior.

Espada believes that the ramming could indicate stress, which could be associated with the nets and long lines found along the Straits and the fact that the area is a major shipping route.

Gibraltar orcas are also endangered and are suffering in the food-scarce, noisy and polluted waters in the area, researchers say.

The Gibraltar Straits is one "the worst place for orcas to live," according to Ezequiel Andréu Cazalla, a cetacean researcher who also spoke to the Observer.

The only reason the orcas return to the area is that they hunt bluefin tuna, which used to be abundant in the area.

However, human fishing has caused the near-collapse of bluefin tuna, in turn leading the orca population "to the very edge, with only about 30 adults left", according to Cazalla.

Orcas are the largest of the dolphin family and can grow up 32 feet.