‘A very dangerous situation’: COVID restrictions spread across US

Washington: State and city leaders across the US are rapidly introducing new restrictions to stop the spread of COVID-19 as infections and hospitalisations spike nationwide.

The head of New York City's education system announced that all schools there would close from Friday (AEDT) and resume online-only learning after the city's test positivity rate hit three per cent.

With 1800 schools and 1.1 million students, New York's school system is easily the biggest in the country. 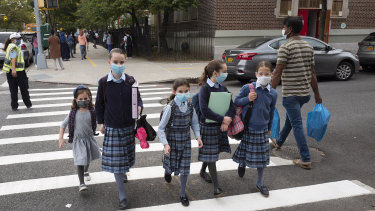 Students in Brooklyn will now have to revert to online learning, along with the rest of the pupils in New York City.Credit:AP

The announcement sparked immediate anger among parents given restaurants and gyms remain open for business in the city, albeit at reduced capacity.

New York's decision to close all schools is strikingly different to the approach in many European countries. France, Germany and the United Kingdom have ordered many businesses to close but have made it a priority to keep schools open.

With temperatures dropping in the US ahead of the Thanksgiving holiday next week, officials are growing increasingly concerned about relatives and friends gathering indoors.

Oregon Governor Kate Brown announced a two-week "freeze" in her state that includes citations and fines for people who attend gatherings of more than six people. 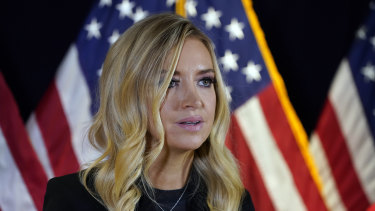 'The American people know how to protect their health," McEnany said.

"We've dealt with COVID for many months."

The US reported passed the grim milestone of 250,000 COVID-19 deaths on Thursday (AEDT), according to Johns Hopkins University figures, when it recorded more than 160,000 new cases and 1565 new deaths in 24 hours. The daily death count has now reached its highest level since mid-May. Twenty states are currently recording their highest hospitalisation rates since the pandemic began.

New York state alone has recorded 34,187 coronavirus deaths since the start of the crisis.

"I'm the most concerned I've been since this pandemic started," Tom Inglesby, the director of the Johns Hopkins Centre for Health Security, told CNN.

Tim Walz, the Governor of Minnesota, is expected to announce the closure of all bars, restaurants and gyms for four weeks after coronavirus cases and deaths reached record numbers in the state.

Sixty-seven people in Minnesota died on Wednesday, the highest single-day figure since the pandemic began.

Ohio Governor Mike DeWine this week announced a 21-day curfew from 10pm to 5am in his state and California Governor Gavin Newsom announced he was putting an "emergency brake" on economic activity in the nation's most populous state.

Los Angeles Mayor Eric Garcetti tweeted: "The US is breaking new infection records every day and averaging more than one COVID-19 death every minute.

"LA is in a very dangerous situation."

Michigan Governor Gretchen Whitmer this week announced that high schools and colleges in her state must halt in-person classes, restaurants must stop indoor dining and casinos, movie theatres and bowling alleys must close for three weeks.