The Federal Court has ordered that secret parts of the ABC’s written defence to a defamation suit brought against it by cabinet minister Christian Porter should be scrubbed from its public records, effectively preventing the document from being accessed by the public.

Mr Porter agreed in May to withdraw his high-stakes defamation case against the ABC, although the proceedings have not yet been officially discontinued. 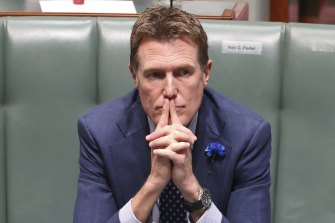 As part of a settlement deed, the ABC and Mr Porter agreed to seek a court order that 27 pages of the ABC’s 37-page defence to his claim “be permanently removed from the court file”. The pages are redacted in the publicly available version of the defence.

A temporary suppression order over the 27 pages was made by Justice Jayne Jagot in May, pending an anticipated pre-trial application by Mr Porter to strike them out and remove them from the file on the basis that they contained “scandalous” and “vexatious” material, or material that was “otherwise an abuse of the process”. That application fell away when Mr Porter agreed to drop the case.

Nine Entertainment Co, publisher of this masthead, and News Corp briefed a barrister, Dauid Sibtain, to fight the interim suppression order and ultimately to access the unredacted defence.

At a hearing earlier this month about whether the defence should be removed from the court file, Mr Porter’s barrister, Bret Walker, SC, said “removal from the file does not mean … expungement, by way of some intellectual black hole, from the records of the court”.

He said it would be transferred to another part of the court’s records. While the ABC had agreed with Mr Porter to ask the court to remove the material from the court file, it did not play an active role in the hearing on the issue.

Justice Jayne Jagot said during the hearing that the “practical legal consequence” of removing the defence from the file would be that it “would not be a ‘document in a proceeding’ amenable to inspection” by members of the public, under Federal Court rules dealing with access to court documents by non-parties to proceedings.

In a decision on Friday, Justice Jagot ordered that the unredacted defence be removed from the court file. A copy of the document will be “sealed and stored” elsewhere in the court’s records and will not be opened or made available to the public without leave of the court.

In his statement of claim, Mr Porter had alleged an online article published by the ABC in February defamed him in a number of ways, including by suggesting he “brutally raped a 16-year-old girl in 1988”, when he was 17, and that this contributed to her taking her own life last year, after she told NSW Police that she did not wish to pursue her complaint. He strenuously denies the claims.

In a statement in March, NSW Police said there was “insufficient admissible evidence to proceed” with an investigation in the matter.

Mr Porter had alleged the article also suggested there were “reasonable grounds” for suspecting him of the crime, and for suspecting that the alleged crime contributed to the woman taking her own life.

In its written defence, 10 pages of which are publicly available, the ABC said the article did not convey any of the defamatory claims alleged by Mr Porter and the article was not “of and concerning” him, because he was not named.

But the ABC also said it could prove it was true to say there were “reasonable grounds for suspecting” Mr Porter of the alleged crime, and for suspecting that it contributed to the woman taking her own life.

The broadcaster expected to call at least 15 witnesses, the court has previously heard. Particulars set out in support of its defence were suppressed.

Justice Jagot made an order earlier this week to allow the South Australian Coroner’s Court to access the ABC’s full defence as it continues its investigation into the death of the woman who accused him of rape.