Home » World News » After vaccinating 90 per cent of adults, Malaysia is opening up

After vaccinating 90 per cent of adults, Malaysia is opening up

Singapore: There is light appearing at the end of the tunnel in Malaysia after one of the worst COVID-19 crises in the region, with interstate and international travel to resume from Monday after the country announced it had fully vaccinated 90 per cent of adults.

Malaysia has suffered an infection and death rate that on a per capita basis has exceeded Indonesia, the country hardest hit by the virus in south-east Asia. 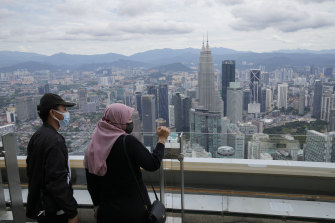 Freedoms are steadily being returned to Malaysians as the vaccination rate rises.Credit:AP

However, Kuala Lumpur’s vaccine procurement and distribution has been a silver lining of its pandemic woes.

In a national address on Sunday, he said 90 per cent of adults had received two doses, announcing state borders would be re-opened to the fully vaccinated and inoculated Malaysians would be permitted to travel overseas again without a special exemption pass.

“I know Malaysians have been patient. This lifting of interstate travel restrictions will allow families to be reunited,” Ismail said.

Malaysians will still need to observe 14 days in quarantine when they return from abroad and protocols such as mask wearing and social distancing will still be policed, he said.

But the relaxing of internal border controls, first put in place in January, reflects an intention to treat the virus as an endemic disease. It follows the easing of other curbs in the past month, with schools re-opening, dining in returning for the fully vaccinated and public parks re-opening.

“Despite all the concessions that have been announced, the fact is that we have to live with the virus,” Ismail said.

“The situation demands that people continue to adhere to [health protocols]. I’d like to remind people not be complacent about the relaxations.”

He said tourism activities would also be allowed around Malaysia, which last month welcomed its first visitors back to Langkawi in four months after launching in a pilot program. 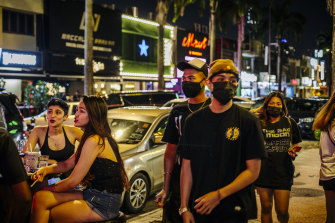 There have been more than 27,000 deaths to the virus in Malaysia including a record 9671 last month as well as a total case load of upwards of 2.3 million, nearly 14 per cent of the population of 32 million.

Daily infections peaked at 24,599 in August following a months-long nationwide lockdown that inundated the health system and left thousands out of work and unable to pay for food and basic necessities, placing white flags outside their homes to register their desperation.

The spread of the Delta variant also brought a political crisis in Malaysia to a head, with Prime Minister Muhyiddin Yassin forced to resign in August after losing his majority in parliament when it resumed as a seven-month state of emergency was lifted.

After being slow off the blocks, however, Malaysia has at least enjoyed a degree of success on the vaccination front.

Just over 65 per cent of its total population have now received two doses of either Pfizer, AstraZeneca, Moderna, Sinopharm or Sinovac.

Malaysia has also deployed the single-shot Chinese vaccine CanSino for people including the homeless and its more than 2 million migrant workers to avoid difficulty in contacting them twice.

The tactic was part of a vaccine surge in July and August in the Klang Valley, an area of 6 million people taking in Kuala Lumpur and Selangor state that was the heart of Malaysia’s epidemic.

The rollout was spearheaded by Minister for Science, Technology Khairy Jamaluddin, who has since been appointed Health Minister under new Prime Minister Ismail.

Khairy told The Sydney Morning Herald and The Age in July that Malaysia had managed to speed up its delivery of shots to one of the fastest in the world after he renegotiated a deal with Pfizer in May to accelerate the supply of 25 million doses of the American-made mRNA vaccine.

“Most of our portfolio is Pfizer and then we spread our bets,” he said at the time.

“We decided early on that it would be dangerous to put our eggs in one or two baskets.“

Ismail, who like Muhyiddin became Prime Minister without an election being held, has made the “Malaysian family” the theme of his new government ahead of an examination of his popularity in an approaching state poll in Malacca.

'90, After, cent, per, vaccinating
Celebrities