Men accused of posing as tradies and allegedly conning Melbourne homeowners out of more than half a million dollars for dodgy roof works have been nabbed trying to flee Australia.

The group claimed to be a legitimate, licensed roofing company, but Victoria Police allege they conned more than 20 victims out of more than $640,000 by telling them their roofs had defects or were at risk of collapsing.

According to the allegations, one elderly victim paid almost $100,000 for works on his home in Kew only to find his roof still leaked, another paid $31,000 to fix the roof of her Toorak home when the job should only have cost $350, while three sisters paid almost $150,000 for works independent assessors estimated should have cost less than $11,000. 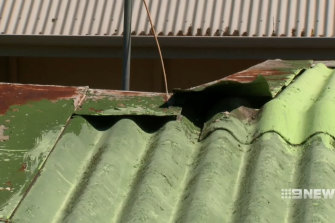 A group of conmen who posed as tradies were arrested over a roofing scam as they tried to flee the country. Credit:ninevms

One of the alleged scammers is a 21-year-old Irish man, who was apprehended by border officials at Melbourne Airport on July 28 while allegedly poised to board a flight using his brother’s passport.

The airport arrest came after detectives raided a Thomastown property earlier in the day looking for the man over the allegations but found he was not home.

It’s alleged he charged an 81-year-old man $99,000 for works on the roof of his Kew property between May and June this year, but left the home with a leaking roof.

The victim was “forced to use pots and pans” inside the house to deal with the leaks, according to police.

“Sadly, it is often some of the more vulnerable or elderly members of our society who are most impacted. For many, the emotional distress and loss of confidence and trust in others is just as damaging as the financial fallout,” Senior Constable Lachlan Balazs said.

On Sunday, three others were arrested, including two British nationals – men aged 21 and 23 – who were trying to board an international flight.

A 20-year-old woman travelling with the pair was released after being questioned.

Australian Border Force superintendent Nicholas Walker claimed it was a “deliberate attempt to slip out of the country undetected”.

A 35-year-old man is now facing deception charges over the alleged scam after being arrested at Oakleigh.

Independent inspections identified works the group quoted for were never required, incomplete or were of poor workmanship with quotes “deemed excessive”.

It’s alleged three sisters paid the alleged scammers $149,450 for roofing works at properties at Point Cook and Brunswick West in June, after quotes suggesting the work would cost $208,700.

Works at the Point Cook property were not carried out to building standards and the costs should have been no more than $10,000, according to an independent inspector.

At their other property the costs should only have been $900 for what was done.

Another alleged victim was a Toorak woman who was told she needed more than $31,000 in roof repairs, which she paid before learning the only work required was the replacement of a downpipe, at a cost of about $350.

Victoria Police has cracked down on roof scams in recent years. Operation Sundial led to conviction of three men for a series of scams in 2020 that netted the fraudsters $434,000 and was aimed mostly at victims aged over 60.

“There is a possibility that further members of the community have been affected by similar activity, and we are urging anyone who suspects they may have fallen victim to illegitimate building work of this nature to come forward,” Balazs said following the arrests of the past week.

The men arrested were charged with deception offences and dealing with the proceeds of crime. They will face court at a later date.