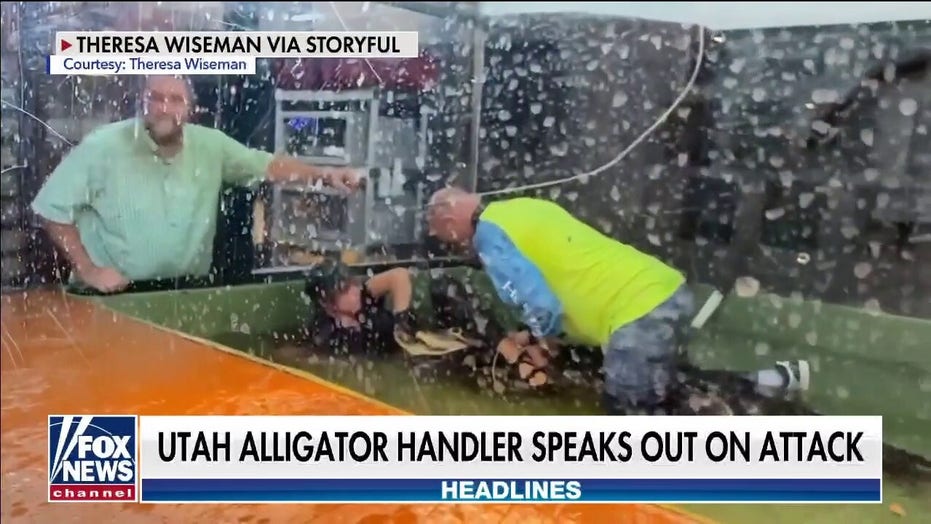 A brave father jumped in to hold alligator down so the handler could get her arm back. Fox News’ Jillian Mele reports.

A handler at a Utah petting zoo who is recovering after being attacked by an alligator over the weekend is speaking out.

ALLIGATOR BITES HANDLER AT UTAH SANCTUARY, AS GUESTS JUMP IN TO HELP

In a Tuesday interview with NBC’s “Today” show, 31-year-old Lindsay Bull said she realized the Saturday encounter was “going to be really serious” when the American gator “really bit down” on her left hand.

The predator clamped down on Bull, forcing her into the water and eventually flipping her over in a move known as a “death roll.”

That’s when Donnie Wiseman – who was there for a birthday party – knew he had to step in to help subdue the alligator known as “Darthgator.”

“I knew that if I didn’t get in there and hold this alligator down, he was going to tear her arm off,” Wiseman told Today.

Wiseman shouted to staff members for help and jumped into the water, wrestling the animal.

When the gator loosened his grip on Bull’s hand, bystander Todd Christopher pulled her out of the pool and Wiseman waited for a beat before making a quick exit.

“I cannot express enough gratitude to both of those men, Donnie and Todd, that were right there, supporting me through,” Bull told FOX 13.