Farmer, who is the only accuser in the case to testify under her real name, described meeting the late pedophile and his alleged procurer when she was 16.

She has previously accused the pair of lavishing her with gifts and offering to advance her studies in a plot to snare her in their alleged sex-trafficking ring.

She branded Maxwell a ‘sexual predator’ after her arrest last year. Farmer was meant to give evidence on Thursday, but proceedings were paused after an attorney fell ill.

On Friday she testified that Epstein took her and her sister, Maria Farmer, to see the ‘Phantom of the Opera’ and then a movie, where she sat next to Epstein.

While recalling how Epstein first ‘caressed’ her hand and then her leg during the movie, she said: ‘I felt sick to my stomach. It wasn’t something that I was at all expecting.’

Farmer said she first met Maxwell in 1996 when she was taken to Epstein’s New Mexico ranch and got the impression that the two were ‘romantic partners.’ 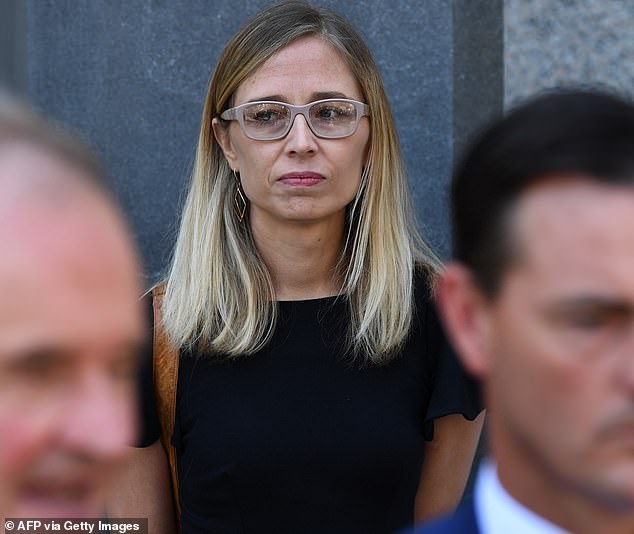 Annie Farmer, one of the four accusers in Ghislaine Maxwell’s sex trafficking trial took the stand on Friday 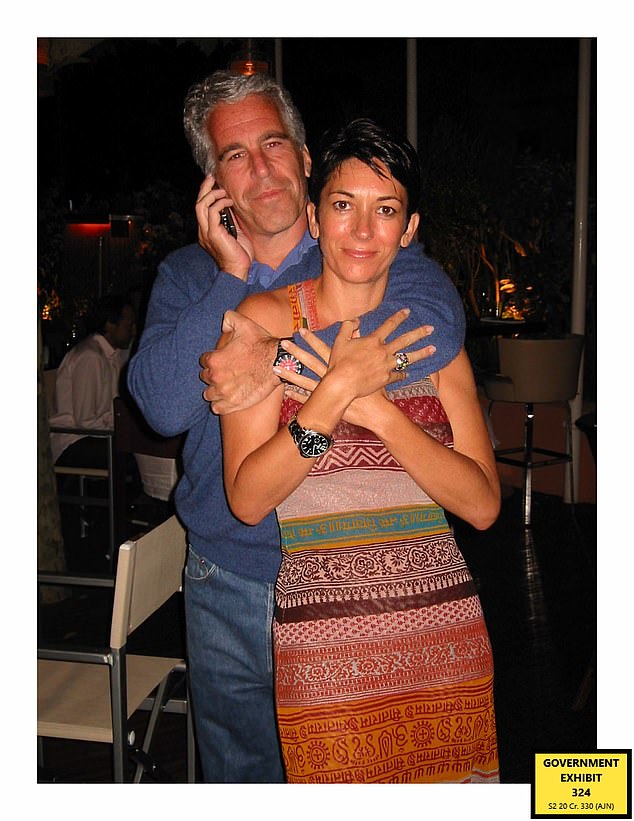 She recalled going on another trip to the movie theater. Farmer told the court that she was hesitant to go at first because of the previous encounter, but thought it would be different since Maxwell was there.

The three went to see Primal Fear where Farmer says Epstein ‘right away tried to hold my hand and caress and hold my foot and my arm.’

Maxwell, meanwhile, ‘sat and held one of [Epstein’s] feet’ and allegedly instructed her to massage the other.

‘I just watched what she was doing and she instructed me,’ she said. ‘And so I did what she told me.’

She has previously recalled being groped by Epstein and Maxwell in the summer of 1996 when she was 16. She had been introduced through her sister Maria Farmer who was 25 at the time.

Annie had described her first meeting with Epstein to the New York Times last year, revealing that a sweatpants-clad Epstein welcomed her into his home with champagne and conversation about her college plans.

During her visit, she went with Epstein and her sister Maria to a movie, where the financier began rubbing her hand and lower leg.

She wrote about the incident in a diary entry from January 1996, which reads: ‘It was one of those things that just gave me a weird feeling but wasn’t that weird + probably normal.

‘The one thing that kind of weirded me out about it was he let go of my hand when he was talking to Maria.’ 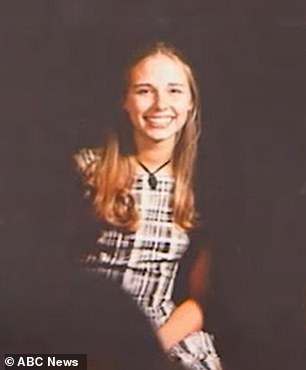 Epstein later invited Annie to visit his ranch in New Mexico for a weekend and she accepted, expecting that other students would be there as well.

When she arrived and found it was only her, Epstein and Maxwell, the weekend took an uncomfortable turn.

She said Epstein subjected her to more intimate touching, and that one morning he came into her room and got into her bed because he wanted to cuddle.

She remembers Maxwell persuading her to give Epstein a foot massage and then teaching her how to do it.

Maxwell also repeatedly asked her if she wanted a massage and wore her down until she finally undressed and got on a massage table, where Maxwell groped her bare chest, she claims.

‘I don’t think there was any reason for her to be touching me that way,’ Annie said.

Epstein did not participate in the massage, but Annie sensed that he may have been watching the encounter.

Maria has expressed guilt over having accidentally helped Maxwell and Epstein prey on her younger sister, who was 16 at the time.

She mentioned that Annie was looking at colleges, and Epstein offered to fly the younger Farmer out to New York from Arizona.

Maria, who is not a part of this case, was unaware of what went on with her sister at the New Mexico ranch until after her own abusive encounter with the pair. 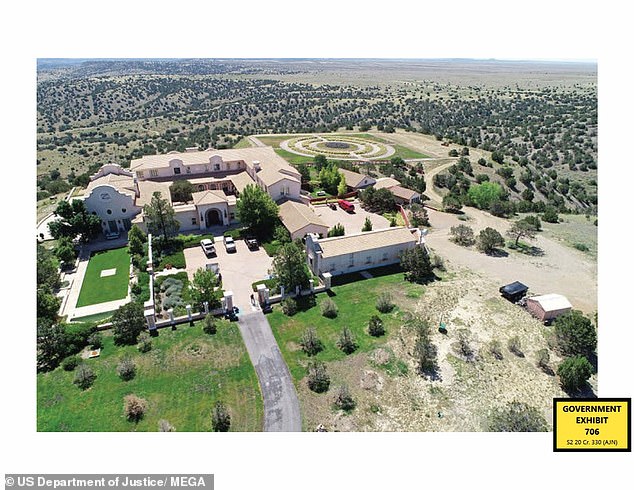 Epstein later invited Annie to visit his ranch in New Mexico for a weekend and she accepted, expecting that other students would be there as well 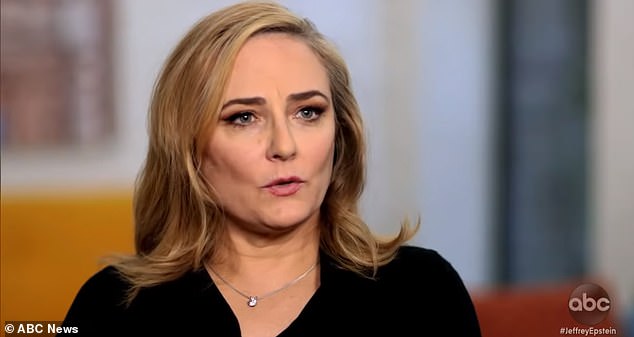 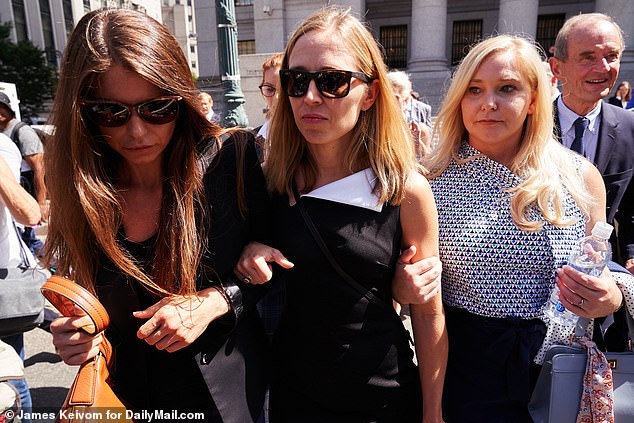 Around that time, the summer of 1996, Maria was focusing on her painting at Epstein’s estate in Ohio when he and Maxwell came to visit her.

She recalls one night when Epstein asked her to give him a foot massage, saying that during the ‘brief and awkward’ encounter Epstein ‘groaned with what seemed like exaggerated pleasure, followed by a yelp of pain’.

Afterward he invited her to watch TV in his bed and Maxwell joined them, Maria said.

The pair began to violently grope her, ‘rubbing her body, commenting on her features, and twisting her nipples to the point of bruising’, until she ran away and hid.

Maria soon discovered that three nude photographs of Annie and their then-12-year-old sister, who had modeled for her paintings, had gone missing from the storage box where she kept them.

During her desperate search for the intimate photos Maria called her art mentor, Eric Fischl, and told him about the disturbing incident with Maxwell and Epstein.

The girls’ father Frank Farmer picked Maria up from the estate.

Maria confided in Annie soon after and learned that she had similar experiences with Epstein and Maxwell.

After Maria returned to New York she got a call from Maxwell, who threatened to burn all of her artwork and ruin her career.

The call prompted Maria to file a report with the NYPD about the Ohio assault and the stolen art.

Officers referred her to other agencies, including the FBI, because the assault was out of their jurisdiction, Maria said.

She said she spoke with an FBI agent but received little support and was not told whether any action would be taken.

Maria would go on to share her story with others in the art community who knew Epstein, but got the impression that none believed her.

The six charges against Maxwell:

Transportation of a minor with intent to engage in criminal sexual activity (10 years minimum, life maximum)

Sex Trafficking of a Minor

Ghislaine Maxwell also faces two charges of perjury but those counts are due to be tried after her sex crimes trial.

The charges relate to testimony she gave in 2016 in a defamation case filed against her by Epstein accuser Virginia Giuffre.

Prosecutors say Maxwell groomed three girls between 1994 and 1997 for Epstein.

They are not named in the indictment, but she allegedly targeted them in London, Florida, New York and New Mexico.

Maxwell, it is alleged, would befriend the girls by asking them about their life and their schooling. She would put them at ease by taking them to the movies and taking them shopping, winning their trust to later deliver them to Epstein, it’s alleged.

To ‘normalize’ the abuse that would come later, prosecutors say she undressed in front of the girls herself and asked them sexual questions.

She then not only facilitated Epstein abusing them, prosecutors say, but took part in some of it herself.

The indictment also says Maxwell made the girl feel ‘indebted’ to Epstein by encouraging them to take money from him and let him pay for their education and travel.

In 2003 she and Annie gave their story to a Vanity Fair reporter commissioned to write an article about Epstein’s finances and proclivity for young girls, but when it came out it had no mention of the Farmers.

Years later that reporter, Vicky Ward, said the article went in a different direction because they couldn’t corroborate what the girls had said.

Maxwell caught wind of the story and allegedly told Maria: ‘Better be careful and watch your back. I know you go to the West Side Highway all the time. While you’re out there, just be really careful because there are a lot of ways to die there.’

Maria eventually abandoned her dream of becoming an artist because of the influence Epstein and Maxwell had in the industry.

She spent years in therapy trying to erase Epstein’s impact and even underwent breast reduction surgery because she was haunted by his and Maxwell’s comments about her chest.

Annie fared better, going on to get her PhD and become a psychotherapist. But, of course, the abuse still haunted her.

In 2006 the sisters were given new hope of justice when FBI agents contacted them during an investigation into allegations of underage sex abuse by Epstein in Florida.

That investigation resulted in a sweetheart plea deal that landed Epstein in jail for just 13 months.

The Farmers’ said the outcome of that case was ‘deeply demoralizing’.

Everything resurfaced in 2018 when the Miami Herald published a report about the plea deal, sparking an onslaught of allegations that led to Epstein being charged again this summer.

Hearing all of the new allegations caused Maria renewed pain as she wonders if she could have stopped him earlier by pushing her own story harder and louder.

‘Every time I hear one of the girls tell their story, it devastates me,’ she said.