Anxious wait for Australia’s Tongan community in wake of volcano

A sound like thunder, then the line went dead. The last time Sikahema Aholelei spoke to his family in Tonga was on Saturday night when the Hunga Tonga-Hunga Ha’apai volcano erupted.

Now every time the phone rings he’s hoping it's his brothers or sisters on the line. 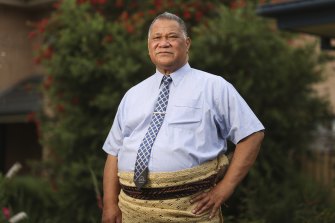 Sikahema Aholelei, President of the Tongan Association Canberra and Queanbeyan, at his home in the nation’s capital on Monday. Credit:Alex Ellinghausen

“We keep trying and seeing if we can contact them by phone, WhatsApp, or Facebook,” he said. “But maybe they haven’t been able to charge their phones.”

The underwater volcano rose to 100 metres above the sea, 50 kilometres north of Tonga’s main island Tongatapu, where the capital Nuku’alofa is. The eruption is thought to be the biggest since Mount Pinatubo in the Philippines in 1991.

It created a 30 kilometre-high cloud that rained down ash on the archipelago and, with most of the volcano underwater, sent a significant tsunami as far as Australia and the US west coast.

Power was cut off and disabled the undersea cable linking Tonga to the internet. There are no confirmed reports of casualties, but authorities are still seeking information from areas outside Nuku’alofa and its neighbouring islands. 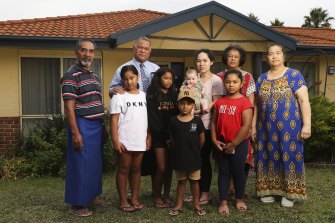 Australia and New Zealand are undertaking reconnaissance flights to assess the damage.

The nations will combine to deliver the relief effort which is being prepared and may include deployment of the HMAS Adelaide naval ship.

“We know that all Australians are safe and accounted for, particularly we know all of our personnel that are over there. There are concerns about one UK citizen who I understand is missing,” Australia’s Minister for the Pacific Zed Seselja said.

“We know that there [are] some areas where there is pretty significant damage. Fortunately, that does not include the airport. There are no reports of any significant casualties at this stage. But obviously, we don’t have the full assessment because there are parts of town where we just don’t know exactly what has happened.”

Senator Seselja said a Hercules aircraft could depart Australia with aid supplies for displaced families as soon as it was safe to land in Tonga.

Mr Aholelei, president of the Tongan Association for Canberra and Queanbeyan, said the past few days have been a nervous wait, spent watching the news and listening to the radio for updates.

He said his association would organise something for the local community when communications had been restored, but the main priority was on contacting loved ones.

The last time Sydney resident Petilise Tuima spoke with her family was on Saturday afternoon as they evacuated to higher ground, squeezing 14 people into a small car.

“We are quite stressed at the moment,” she said. “They didn’t take any food, they just took water … everyone was packed in the car. Everyone is calling each other within our Tongan groups, wanting to see if anyone has picked up or heard anything … We are just desperate.”

Ms Tuima recently sent supplies to her family, including rice, flour and crackers, so she’s confident that should shortages hit the island they’ll have enough food to see them through, if they can get back home.

Pita Taufatofua, the Tongan Olympian who rose to fame for his appearance at the 2016 Rio Games opening ceremony for baring his chest, took to social media to say he had not heard from his family, including his father, who lived in Tonga.

“For now my focus is what I can do from my current position and that is awareness and assistance,” he wrote. “My focus is on the people of Tonga who will need all our help to rebuild.”

Mr Taufatofau, who lives in Australia, has started a fundraising page and posted an update on Sunday.

“Many Tongans around the world are in the same boat as me and worried about their families in Tonga. Praying that more information comes through tomorrow.”