Archer collapses as the Queen's coffin is carried out of cathedral

This is the moment when a Royal Archer collapses as the Queen’s coffin was being carried out of St Giles’ Cathedral in Edinburgh.

The Royal Company of Archers had been standing outside the Cathedral waiting to march alongside the Queen’s coffin when one of its members had a wobbly moment.

Footage shows one of the Archers in the back row swaying from side to side, before collapsing into his colleague as the Queen’s coffin was leaving St Giles.

Three other Archer’s then rush to his side as his company continued with their ceremonial duties and bagpipes continued to play.

The dizzied military member was then spotted sitting out of sight behind the statue of Walter Montagu Douglas Scott. 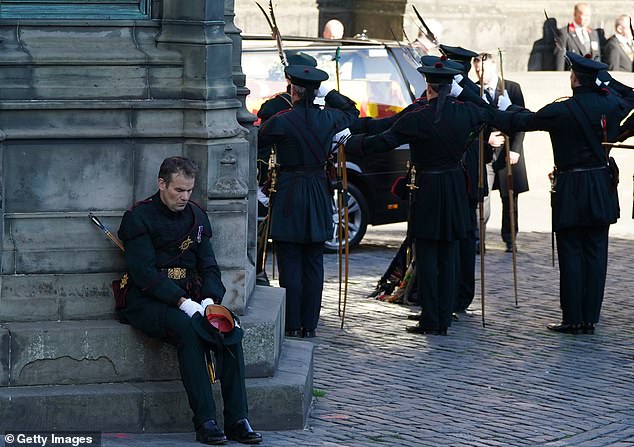 A Royal Archer was seen fainting outside St Giles’ Cathedral as Queen Elizabeth II’s coffin was carried into the hearse. He could then be seen sitting behind the Walter Montagu Douglas Scott statue with his cap in his hands 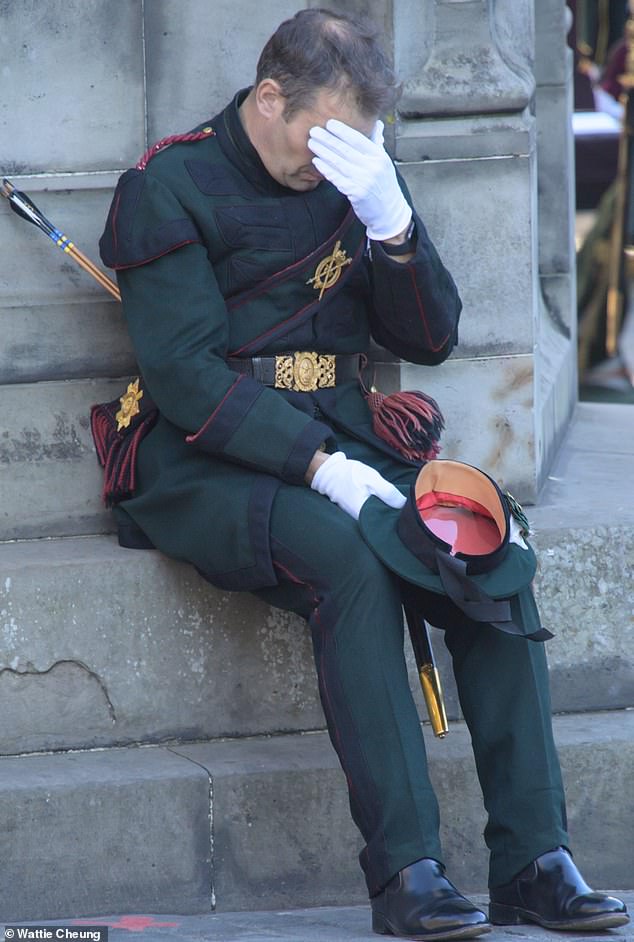 He can be seen holding his cap between his hands as the coffin was laid in the hearse before being driven up the Royal Mile.

The Royal Company of Archers were the Queen’s official bodyguards whenever she was in Scotland.

They will now serve as the King’s Scottish bodyguards.

The military company duties are requested by the monarch and during Scottish ceremonial occasions.

Today the Queen began her final journey from Scotland to Buckingham Palace.

At around 4pm this afternoon, her coffin was draped in the Royal Standard of Scotland and decorated with a large wreath before being carried to the hearse.

The bearer party will then carry the Queen from the aircraft to the waiting state hearse to begin the journey by road along the A40 towards Buckingham Palace.

Upon arrival, she will be received by King Charles and the Queen Consort as well as the Princes and Princess of Wales and the Duke and Duchess of Sussex.

The Queen will remain in Buckingham Palace overnight before she is taken to the Palace of Westminster, where she will lie in state until her state funeral at Westminster Abbey on Monday, September 19.

More than one million mourners are expected to visit the Queen’s coffin in London over the next week, according to Whitehall bosses.