Argentina stops flights from Brazil, Mexico and Chile due to COVID-19

Argentina announces the suspension of all flights from Brazil, Chile and Mexico to stop different strains of the coronavirus from being spread through the country

Argentina will be suspending flights from Mexico, Brazil and Chile as of Saturday as part of a plan to prevent different strains of the coronavirus from entering the country.

The South American nation announced the move Thursday as it prepares itself for a second wave of infections.

The government said in a statement that the measures include tests and mandatory isolation for citizens who return from other regions.

‘Until further notice, regular flights will be suspended from… Chile, Brazil, Mexico,’ the statement read. 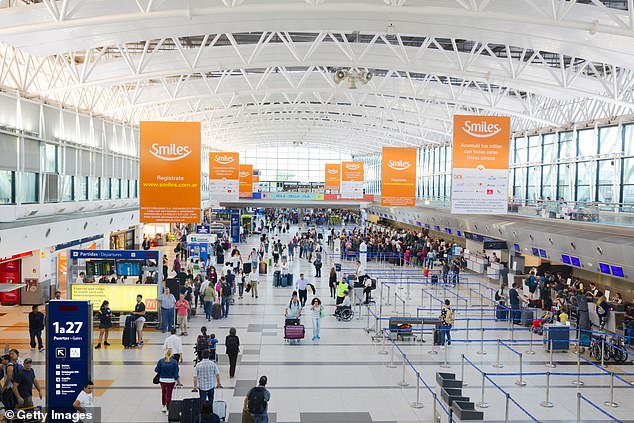 Argentina as of Saturday will be suspending flights arriving from Brazil, Mexico and Chile as part of an initiative to prevent different strains of the coronavirus from entering the country and to prepare itself for a second wave of the pandemic. Argentina has reported 55,092 confirmed coronavirus deaths and 2,278,115 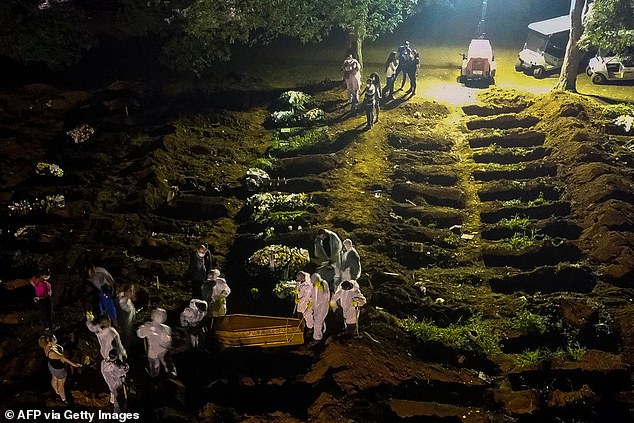 Workers lower a coffin at Vila Formosa cemetery in Sao Paulo, Brazil, on Thursday as family members of an individual who died of the coronavirus observe. Argentina on Thursday announced it will suspend flights arriving from Brazil, Mexico and Chile as part of an attempt to prevent the entry of coronavirus strains from those countries 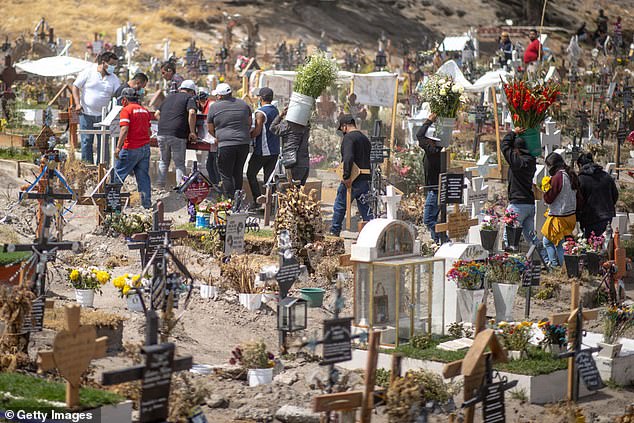 A group of people carry a coffin of a person in the new section of the San Miguel Xico Cemetery in Valle del Chalco, Mexico, on Thursday. Mexico is one of three countries that was placed on a travel ban list by Argentina’s government

A similar policy is already in place for flights from Britain and Northern Ireland.

Data collected by John Hopkins University showed that Argentina had registered 2,278,115 cases of COVID-19 and 55,092 deaths as of Friday.

The government has become increasingly concerned with the state of the pandemic in neighboring Brazil, which has 12,320,169 cases and 303,462 deaths – both figures coming in second to the United States.

As part of the Argentine government’s preventive plan, returning passenger’s will have to provide a negative PCR test before boarding the flight. 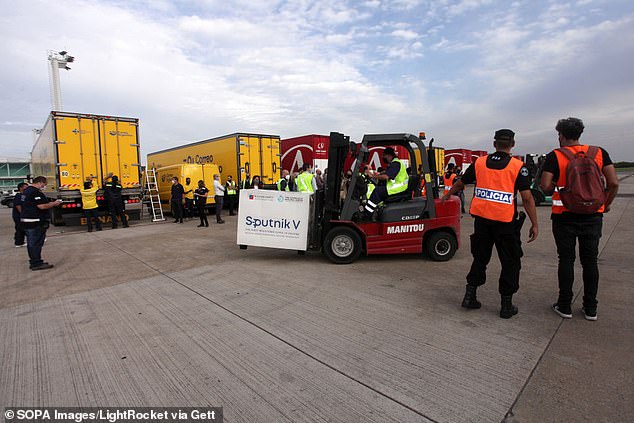 A container containing the Russian Sputnik V coronavirus vaccines is transported after it was loaded off an Aerolineas Argentinas flight at an airport in Argentina on Monday. More than 3 million people in Argentina have been vaccinated for the virus

Residents who test negative for the coronavirus will have to comply with an obligatory quarantine at their homes for 10 days.

Santiago Cafiero, the Chief of the Cabinet of Ministers, would not rule out imposing additional restrictions in the near future, according to newspaper La Nación.

‘The pandemic taught us that we should never be confident,’ Cafiero said. ‘If tomorrow we have an increase in cases or if we find complicated virus mutations, we will surely take other measures.’

Migration data records show that at least 25,000 Argentine residents are traveling outside of the country at the moment.