A Government minister who said at least one British military veteran who served in Afghanistan had taken their life in the wake of the Taliban takeover later admitted the claim may have been ‘inaccurate’.

Armed forces minister, James Heappey, who served in Afghanistan, told Sky News presenter Kay Burley that he was aware of at least one veteran who had taken their life ‘in the last week or so’ following the US-led withdrawal from the country.

But the minister said the report he was referring to may have been ‘inaccurate’ during an appearance on BBC Breakfast just minutes later.

During his interview with Sky News Mr Heappey said: ‘I know unfortunately there have been soldiers who have served in Afghanistan, indeed a soldier who served during my last tour of Afghanistan, who have taken their own lives in the last week or so because of the feelings they’ve had over what has happened in Afghanistan. 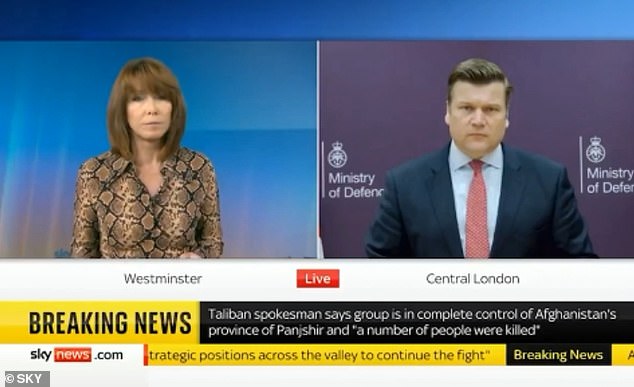 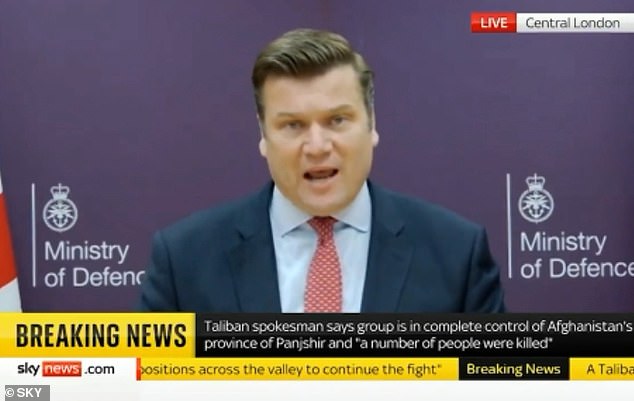 ‘That is hugely concerning and upsetting for people like me who are now in government and who served there.’

He added: ‘That makes me sick to the bottom of my stomach and fearful for many of my friends who I know are still struggling with what they saw on those tours of Afghanistan.

‘That’s why the Government, the nation, needs to put our arm round our veterans and tell them how proud we are of what they did.’

However the junior defence minister later withdrew his comments during an interview on the BBC and said the government was now ‘looking very carefully’ into the claim.

He said: ‘Since I mentioned that to your colleague Kay Burley on Sky only 20 minutes ago we have had a number of reports that actually the thing I was referring to was inaccurate.

‘We’re looking very carefully whether it is true that someone has taken their life in the last few days but actually that shouldn’t take away from the fact that far too many service people have taken their lives in the last ten years as a consequence of their service in Afghanistan.

‘A high number from my own regiment. We can leave no stone unturned in making sure that we support out veterans.

‘This will be an acutely challenging time for them when their service in Afghanistan will be called into question in their own minds and we need to reassure them that their service was worthwhile.

‘We need to get an arm around them as a nation, through the government, through charities, through the regimental associations to make sure they are supported.’

The armed forces minister insisted that his possible error should not detract from the need to support veterans of the conflict, many of whom were deeply distressed by the events of the past weeks.

He continued: ‘There have been far too many veterans over the last ten years who have taken their lives as a consequence of their service in Afghanistan and many who are still struggling to lead normal lives because of the things they saw and experienced.

‘This more than any time is a time for us as a government to support the military charities that support our veterans but also for the nation to support those charities.’ 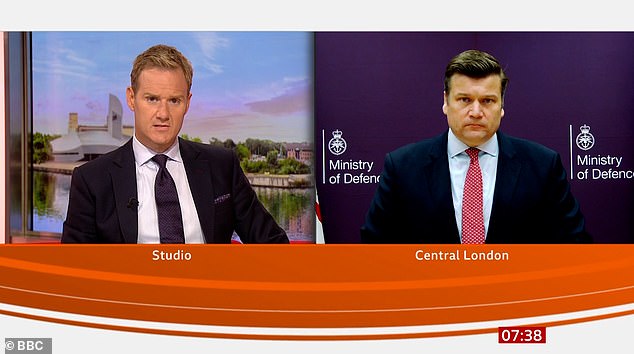 He added: ‘The most important thing we can say to them is all of this is a consequence of political decision making, it is not in any way connected to the military service and they should be proud of what they did on their tour.

‘It was worth it and nobody can ever take that success away from them and they should hold their heads up high.’

His comments come as Boris Johnson prepares to announce an additional £5 million to help military charities offering support on mental health issues to veterans in a Commons statement on the latest situation.

Last week, America and Britain officially ended their military presence in Afghanistan with the final US troops flying out from Kabul’s airport.

And a night-vision image showed America’s Major General Chris Donahue, commander of the 82nd Airborne Division, boarding a military transport as the last US soldier to leave Afghanistan after 20 years of war.

The RAF had made its last evacuation flight last Sunday to give US forces enough time to clear the ground ahead of the deadline set by Joe Biden, bringing to an end a deployment which began in the wake of September 11.

The UK government helped fly some 15,000 people to safety, but stories have emerged of interpreters who helped the armed forces over the last 20 years and even people with British passports stranded behind Taliban checkpoints.

It is not known precisely how many people who were promised sanctuary in the UK were left behind. 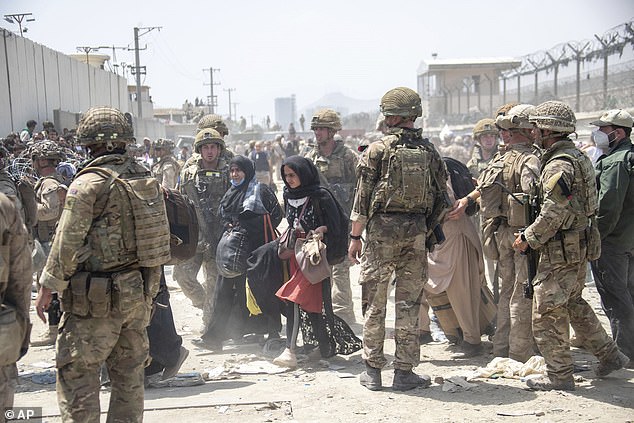 British and US troops help evacuate people out of Kabul, Afghanistan, after the Taliban seize power 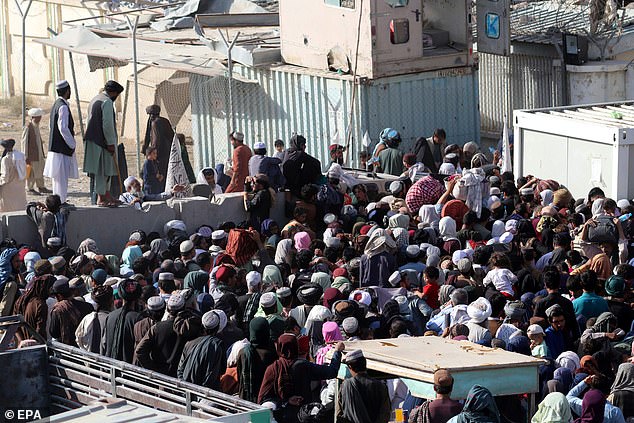 Some 200 American passport holders are now thought to be living under Taliban rule, with an unknown number of Afghans promised sanctuary – thought to number in the thousands – also abandoned.

‘There’s a lot of heartbreak associated with this departure,’ General Frank McKenzie, head of U.S. Central Command, said on Monday night. ‘We did not get everybody out that we wanted to get out. But I think if we’d stayed another 10 days, we wouldn’t have gotten everybody out.’

Shortly after US troops left the airport, images emerged of Taliban Badri 313 units – known as the group’s ‘special forces’ – securing the airport while dressed in US-made kit and carrying American weapons – seizing more US helicopters, planes and vehicles in the process.

Following the withdrawal, senior Taliban figures including spokesman Zabihullah Mujahid gathered at the airstrip for a celebratory press conference – hailing the end of what they called ‘western occupation’.

‘Congratulations to Afghanistan… this victory belongs to us all,’ Mujahid told reporters, saying the Taliban’s victory is a ‘lesson for other invaders and for our future generation. It is also a lesson for the world,’ he added.

Reports suggest many are already fleeing through Pakistan to the east and Iran to the west. The US and UK are still working on arrangements to allow people to be evacuated from these neighbouring countries.

The departure of American troops means the conflict ends with the Taliban back in power and Afghans deeply uncertain of what the future holds.

In a statement, Biden said the world would be watching how the Taliban behaved. 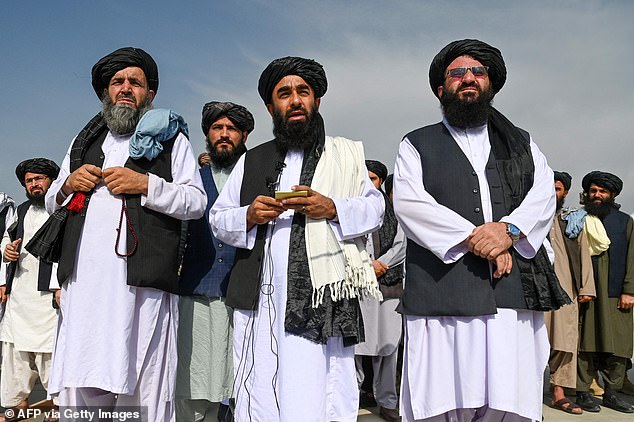 The Taliban held a press conference at Kabul airport last week, with spokesman Zabihullah Mujahid (centre) saying the West’s retreat should serve as ‘a warning’ to all future invaders

‘The Taliban has made commitments on safe passage and the world will hold them to their commitments,’ he said, adding that negotiations continued to keep the airport open and ensure the delivery of humanitarian aid.

He added that he would address the nation on Tuesday and that his military chiefs had agreed the evacuation should not be extended beyond the deadline.

‘Their view was that ending our military mission was the best way to protect the lives of our troops, and secure the prospects of civilian departures for those who want to leave Afghanistan in the weeks and months ahead,’ he said.

For confidential support, call the Samaritans on 116123 or visit a local Samaritans branch. See www.samaritans.org for details.