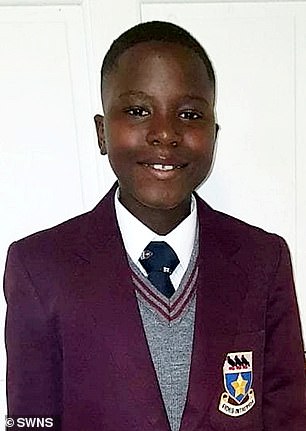 Kuzi Matope, 13, was killed after an electric blanket set fire to his parents’ bedroom in a rented house with broken smoke alarms, an inquest has heard

A 13-year-old Army cadet was killed after an electric blanket set fire to his parents’ bedroom in a rented house with broken smoke alarms, an inquest has heard.

Kuzi Matope was lying in bed listening to music with his headphones on when the blaze broke out.

Landlords Innocent and Clementina Mukarati pleaded guilty to failing to apply for a landlord license, which includes fire safety checks, when they appeared in court in January this year in connection with the fatal fire in March 2019.

The Zimbabwean family had rented the property in Thornton Heath, south London from the couple they knew from church.

One of the smoke alarms had no battery, the other alarm’s battery had corroded and both devices were switched off at the main power line, the court heard.

But the London Fire Brigade could not say for certain whether if the alarms had been working, Kuzi would have been able to survive.

Kuzi arrived home from St Joseph’s College in Beulah Hill, Crystal Palace on the day of the blaze and at around 5.15pm his mother, an NHS healthcare assistant, awoke to have a bath in time for her night shift.

Summarising the events, Assistant Coroner Catherine Wood said: ‘One of Kuzi’s brothers alerted his mother that there was a fire upstairs.

‘We heard how Mrs [Maybie] Matope was in the process of getting ready for work, and put her clothes on, ran up the stairs, opened the door and shouted for her husband to make sure the children were out of the house.

‘We know his two younger brothers managed to leave the house at that moment. 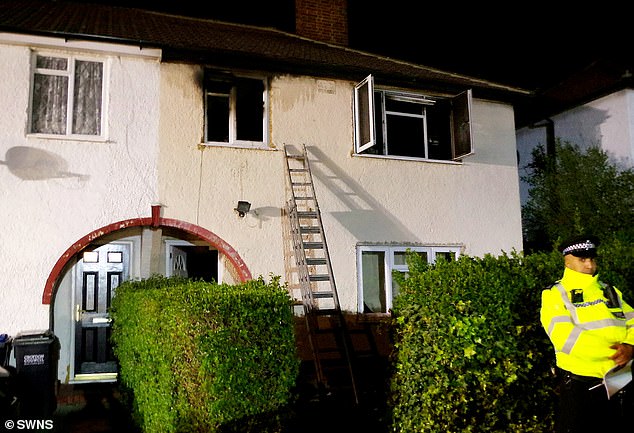 The Zimbabwean family had rented the property in Thornton Heath, south London from a couple they knew from church. Both of the home’s smoke alarms did not have working batteries and were switched off at the main power line, the court heard

‘Kuzi tried to come out, but he was stuck on the landing because of the smoke. He went into his bedroom where he collapsed.

‘Mr [Patrick] Matope and a neighbour made many attempts to smash the window to try to get him out of the house as they couldn’t get back up the stairs.

‘Mr Matope heroically tried to smash the window with his hand and injured himself while trying to rescue his son.’

Firefighters from the London Fire Brigade used breathing apparatus to retrieve Kuzi and took him to St George’s Hospital, Tooting, where he died of a hypoxic brain injury as a result of smoke inhalation eight days after the fire on April 2, 2019.

The inquest at Croydon Coroner’s Court investigated the possibility whether the lack of working smoke alarms contributed in any way to Kuzi’s death.

Mr Matope said: ‘We never tested them [the alarms]. Obviously when we moved in in 2017, the house had just been painted.

‘We assumed everything was working.

‘There was never any incident before that that would make me think they were not working.’ 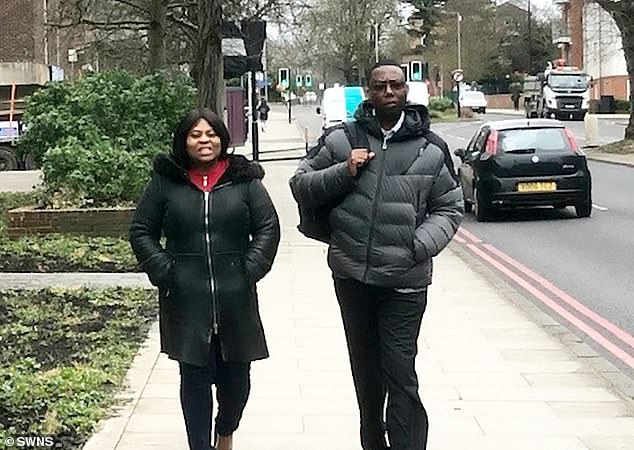 Landlords Innocent and Clementina Mukarati (pictured) pleaded guilty to failing to apply for a landlord license, which includes fire safety checks, when they appeared in court in January

Adrian Parker, senior station officer with the London Fire Brigade, said: ‘Smoke has to get to the smoke alarm to activate.

‘While the bedroom door is closed, you’re not going to get a lot of smoke travelling into the hallway.

‘When the door was open, as it comes into the hallway, I would expect it to activate.

‘I cannot give you a timeframe on when it would have activated without the door being opened as it comes down to external factors.

‘With the bedroom door open I would have expected the smoke alarm to go off. Kuzi was laying on his bed listening to music on his headphones.

‘As Mrs Matope was raising the alarm with her voice, I cannot say whether it contributed or not in this particular case.’

The LFB said it was possible the fire could have started from a lightbulb, but ‘on balance of probabilities’ it was most likely the electric blanket Mrs Matope had been using for her daytime sleep.

The inquest heard there were conflicting stories about when the family moved into the property in Thornton Heath.

The Assistant Coroner said: ‘There was some dispute to the handover for when Mr and Mrs Matope moved in, in particular the handover of the smoke alarms.

‘Neither Mr or Mrs Mukarati were aware the smoke alarms were hardwired into the mains. They thought it was battery operated.

‘Mr Mukarati claims he showed Mr Matope how to use the smoke alarms and how to test them.

‘I prefer Mr Matope’s evidence in this. I consider that he was not told how they worked as neither Mr or Mrs Mukarati knew how the alarms worked either.

‘He was not given a written handover on how to use the smoke alarms and there are no documents pertaining to this.

‘From the investigation of the Fire Brigade, it was switched off so in any event it would have not sounded. We don’t know why the power was turned off.’

She added: ‘At the time, Mrs Matope who went into the room and started shouting and it was shortly afterwards Kuzi came out of his room.

‘We know the alarm would have only likely been sounded if and when the bedroom door was opened, and it may not have activated beforehand.

‘It is speculation to conclude this contributed to his death.

‘I find there were failings on behalf of the landlords. They did not properly explain the smoke alarm system and how it worked to Kuzi’s family and I find that, in particular, as they did not know how it worked properly so they could not have explained it properly to them.’

The Assistant Coroner returned a verdict of accidental death as a result of a smoke inhalation injury caused by an accidental fire.

To the family, she said: ‘I offer my sincere condolences. I can’t imagine what it must have felt like to see what happened to your son on that day.

‘I’m sorry you had to go through this and relive those events today.

‘I hope with the inquest over you can take steps to rebuild your lives.

‘He was such a well loved boy and nothing will be the same again but I hope you have the strength to rebuild and move on as a family. You have my sincere condolences for your loss.’

Both the family and the landlords attended court today. Kuzi’s brothers Ishmail and Patrick were not present.

Breaking down in tears, Mr Matope, a social worker, said: ‘We miss him so much, particularly his two young brothers, the youngest one was two years old when it happened and he’s now four.

‘He has loads of questions for us. The only thing we can show to him are photos and videos.

‘He was very bright, very loving. He loved to go to school. I used to take him to school every day.

‘He was going to cadet school and he was so proud of what he was doing. I’ll cherish the times we spent together.

‘We miss him so much. We miss him every day. Since the incident we’ve moved three times. It’s not been easy. We’ve been helping each other.’