Army veteran, 86, is hailed as a hero for dragging his elderly disabled neighbour out of a burning house after seeing her surrounded by flames while in her wheelchair

An 86-year-old army veteran has been hailed as a hero after saving his elderly disabled neighbour’s life by dragging her out of a burning house.

After John Pratt saw smoke billowing out of the doors and windows of the property next door and saw his wheelchair-bound neighbour surrounded by flames, he knew he had to take quick action.

He held his breath and, despite not being ‘steady’ on his feet, entered the burning building to rescue the trapped woman by ‘tugging her’ out the door – when he then collapsed on a chair in the front garden.

Local residents have called for Mr Pratt, from Sandgate, near Folkestone in Kent, to be honoured for his bravery after the heroic rescue on Friday morning. 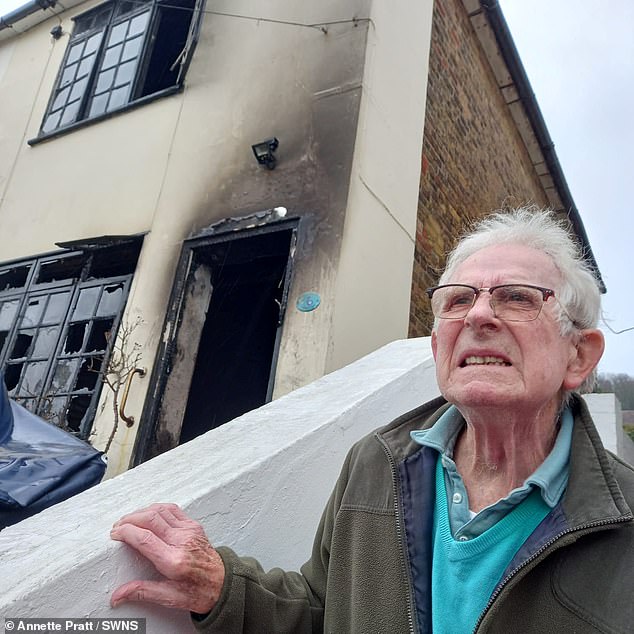 Army veteran John Pratt (pictured), 86, has been hailed as a hero after saving his elderly disabled neighbour’s life by dragging her out of a burning house on Friday morning

Mr Pratt said: ‘Smoke was pouring out of her front door, and I could see her sitting in her wheelchair in the middle of the room on the phone to the fire brigade, with flames all around her.

‘But I thought – there’s no use doing that – so I’m not sure how, because I’m not very steady on my feet, but I held my breath, went inside, and managed to tug her over the doorstep into the fresh air.

‘Then I collapsed in a seat in the front garden.

‘I wasn’t afraid, I couldn’t be afraid, I just knew I had to do something.

‘My wife said I was an idiot, but I told her if it had been you, you would have done the same thing and I know she would.’

Emergency services were called to the blaze just before 9:50am last Friday [January 13].

Firefighters at the scene told Mr Pratt that his act of bravery had ‘undoubtedly’ saved the life of his neighbour, who is believed to be in her 70s. 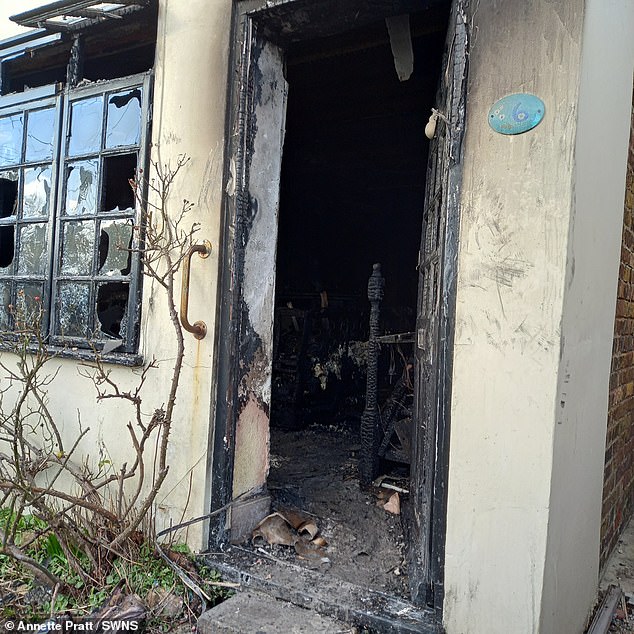 Mr Pratt took action after he saw smoke billowing out of the doors and windows of the property next door (pictured after the fire) in Sandgate, near Folkestone in Kent, and saw his wheelchair-bound neighbour surrounded by flames

A fire service spokesman said: ‘Our teams gave first aid to one person who was showing symptoms of smoke inhalation, before passing them into the care of paramedics.

‘Our volunteer response team also attended and provided support for the affected resident.’

Officials say the exact cause of the blaze is not yet known, but it is ‘believed the fire started accidentally in the living room’.

After rescuing her from the blaze, Mr Pratt, with the assistance of firefighters, took her into his kitchen where she received emergency medical treatment.

Mr Pratt, who has lived in Sandgate since the 1970s, added: ‘The Fire Brigade were fantastic when they eventually arrived.

‘They told me I saved her life, if hadn’t have got her out she would have been a goner.

‘But I knew I would never have forgiven myself if I had done nothing and let her burn.

‘I don’t know how I did it, it must have been a burst of adrenaline.’

Local residents have called for Mr Pratt to be honoured.

One said: ‘You sir are an unequivocal hero of the highest order.

‘The George Cross for gallantry must surely follow. A nation salutes you.’

Another said: ‘Just goes to show that the older generation are still made of teflon! Well done to you, sir! Hope you get some proper recognition.’

Another added: ‘What an amazing gentleman. Hope someone recommends him for a gallantry award.’