Home » World News » As the PM spoke at Garma, I had tears in my eyes

As the PM spoke at Garma, I had tears in my eyes

Writing from the Garma Festival in north-east Arnhem Land this weekend, I felt the same excitement I did the first time I was there in 2017, listening to the words of prime minister Malcolm Turnbull, hoping the hand of reconciliation our people extended in the Uluru Statement from the Heart would be taken.

It is the buzz one feels when the ancient of this country may finally be accepted by the new in a way that will redefine who we are as Australians. Yet at each opportunity, successive prime ministers refused to grasp the opportunity we presented. Our hand was left hanging. 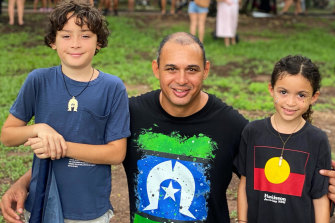 Indigenous leader Thomas Mayor, an advocate for the Uluru Statement from the Heart, with his children.

This weekend, Prime Minister Anthony Albanese delivered a speech that was far from the empty words of his predecessors.

In his speech, Albanese didn’t just reaffirm his commitment to holding a referendum to enshrine an Indigenous Voice in this term of parliament, the priority proposal in the Uluru Statement. He went further, giving the public debate a possible question and new constitutional provisions. He said:

“I am hoping we can progress the efforts of good-willed, hard-working people who want to see the nation move forward and justice realised. Recognising that this is one of the steps in our nation’s journey of healing. Our starting point is a recommendation to add three sentences to the Constitution: 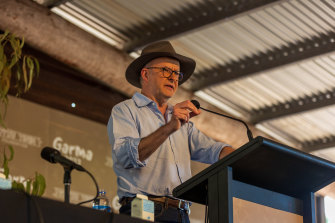 “In recognition of Australia’s Aboriginal and Torres Strait Islander peoples as the first peoples of Australia:

This draft amendment to the Constitution is one of the key planks of detail that Peter Dutton’s Coalition has been asking for as it considers bipartisan support for a Voice referendum. The words Albanese shared must surely confirm to the Coalition that the proposal is not an Indigenous third chamber to parliament that may veto, amend or pass legislation. What the government clearly proposes is a Voice that may make representations to parliament on matters that affect us.

It is also necessarily simple. Three sentences, recognising over 60,000 years of continuous connection to Country. The provision maintains the supremacy of parliament to make decisions for all Australians, including by determining the composition, functions, powers and procedures of the Voice, while recognising our right to speak for ourselves.

The prime minister’s contribution at Garma was welcome. The several-standing-ovations type of welcome. He has provided the opposition, public commentators and the Australian public with the shape and direction needed for the national conversation.

In coming months, we will see further consultation with Indigenous and non-Indigenous Australians. I hope we will also see the diplomacy necessary to hear the concerns of the opposition, so they may systematically be addressed, leaving only the trouble-makers, a sad minority of extremists, opposing something that will help Indigenous people and strengthen us as a nation.

The final crucial details will soon be decided, hopefully by the end of this year. There are unlikely to be any surprises that can detract from the importance of the constitutional change itself: recognising that Aboriginal and Torres Strait Islander people simply deserve a fair go in having a say when decisions are made about us.

We should all start working for a “yes” vote now. We must reach out to those who are yet to learn about the nation-building opportunity ahead. In a representative democracy, we should understand the importance of having a Voice – as workers do through their unions; business and industry through associations; and the Australian people ourselves through the Australian parliament.

Critics of the Voice movement say it is just virtue signalling, unhelpful to “real” Aboriginal people and their communities. They say it won’t address issues like domestic violence and incarceration rates.

This is a falsehood. Domestic violence in our communities is not a matter of our DNA as Indigenous people. It is a matter of policy failures, prejudice and harmful legislation from parliaments who refuse to listen to us on how the issue can be addressed. Domestic violence is prevalent in communities where housing is crowded. Where poverty is entrenched. Where water is undrinkable. Where traumas continue to be inflicted without healing.

Indigenous incarceration rates are so high because we have justice systems that are skewed against our people. We know this. But as we are merely 3 per cent of the population, we don’t have the means to hold parliament to account to address the root causes of these issues.

Establishing a constitutionally guaranteed Voice is the most practical action we can take.

At the weekend, as Albanese spoke, I had tears in my eyes. I was enjoying the moment – a prime minister demonstrating he had listened to, and believes in, us – after more than five years of the Uluru Statement being dismissed and ignored. After an incredible amount of hard work.

I realised this time I was listening to a leader who was giving us the same answer most Australians will give, when they are finally, officially, asked at a referendum polling booth:

Do you support an alteration to the constitution that establishes an Aboriginal and Torres Strait Islander Voice?

Thomas Mayor is a Torres Strait Islander man born on Larrakia country in Darwin. He is a signatory to the Uluru Statement from the Heart.