Astronaut who watched 9/11 unfold from space recounts the experience

‘We’re not having a very good day here on Earth’: Astronaut who watched 9/11 unfold from ISS tells how ground control broke the news of terror attacks to him 20 years ago

Frank Culbertson was 230 miles from the surface of the Earth on September 11, 2001 – the only American astronaut in space as a group of terrorists attacked American institutions.

It was his third trip to space, having also been part of Space Shuttle missions in 1990 and 1993, but this time he was the mission commander of Expedition 3 to the International Space Station, leading two Russian cosmonauts on the voyage.

He and the crew had been in space for 30 days that Tuesday morning on September 11, and it was up to Culbertson to conduct their medical physicals and report the results back to a doctor on the ground.

Culbertson figured he would just report the findings to Dr. Steve Hart, catch up with his friend, and hang up the phone.

But it took a while for Hart to answer, and when he did, Hart told his friend: ‘”Well Frank, we’re not having a very good day here on Earth.’

It was then that he found out that two planes struck the Twin Towers in lower Manhattan, and a third had hit the Pentagon.

As they spoke, news broke that a fourth plane had crashed in Pennsylvania, after passengers overpowered their captors and prevented the terrorists from crashing into the Capitol building.

Culbertson then made his way to a window, and watched as the second tower fell in a cloud of smoke

It was an experience Culbertson, now 72, said he will never forget as he recounted the events of that fateful day in a recent discussion with Rich Cooper, the Space Foundation’s vice president of communications and co-host of its Space4U podcast. 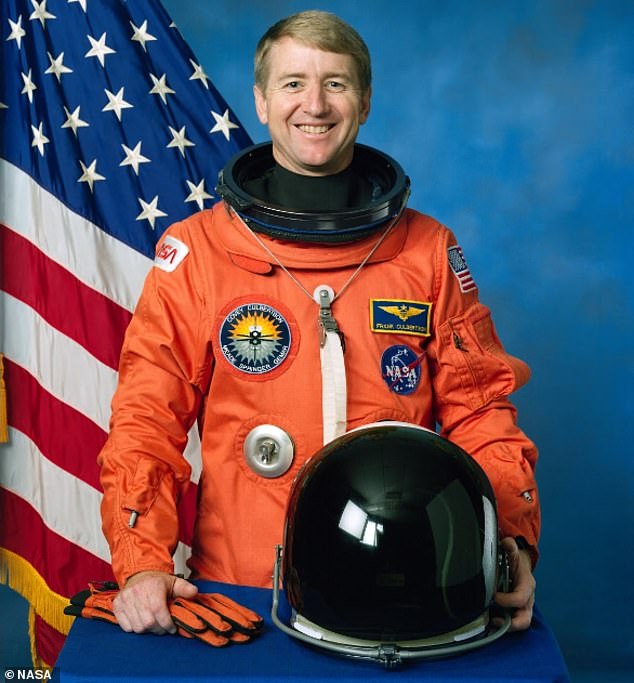 Frank L. Culbertson, now 72, was the only American witnessing the events of 9/11 from space

The voyage started out as any other, Culbertson told Cooper.

‘The 10th was just a regular day,’ he said. ‘We were preparing to receive a new module, and so we’d been going through the checklist for that and making sure everything was ready on the station for that.

He said they ‘went through our normal routines, you know, worked out some experiments and did some communications with the ground.’

The next day, he said, he had to take care of some maintenance, then conduct medical physicals of all the crew, as they did every 30 days.

Culbertson was supposed to call down to the ground on a secure and encrypted line, as the medical information is private, to talk to the doctor on the ground, Dr. Steve Hart.

‘And I called the ground and they finally connected me to him and I said “Hey Steve, how’s it going?” And you know, [I was] ready to give him the information and catch up.’

But because Hart was a ‘good friend,’ Culbertson said, he told him: ‘”Well Frank, we’re not having a very good day here on Earth.’

At first Culbertson said he assumed there was an accident or one of his family members was ill. He was not expecting Hart to tell him that two hijacked planes struck the Twin Towers and a third slammed into the Pentagon.

While they were talking, news broke that a fourth plane had crashed in Pennsylvania.

Onboard that plane, United Airlines Flight 93, passengers managed to overpower their captors, preventing it from crashing into the Capitol building.

But even as the news broke, Culbertson said he had trouble processing it.

‘The other odd thing was I was halfway through Tom Clancy’s The Sum of all Fears on audiobook – fabulous book,’ he said. ‘I thought am I in a book? Is this a movie? I mean is this real? And just kind of fleeting thoughts, and as he’s describing it, and you know, I asked a few questions, I call my crewmates in to where we were talking in the laboratory.

‘They needed to hear what was going on,’ he said. ‘And of course they were very concerned and very serious.

‘Russia had been attacked by terrorists several times in the preceding couple of years,’ he told Cooper, noting that 94 Russians died in the World Trade Center that day. ‘And we had no idea how widespread this attack was going to be, how many countries might be involved.’ 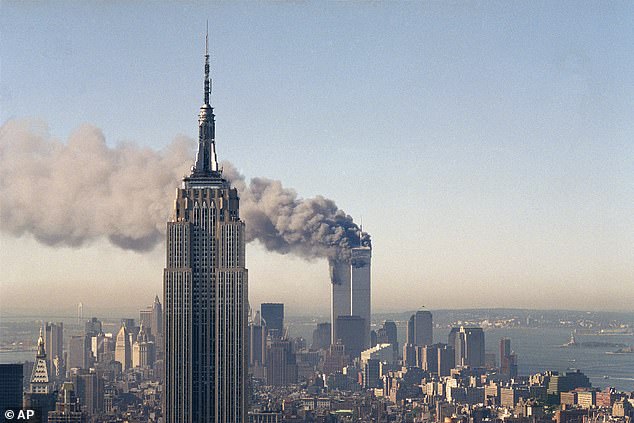 Culbertson was trying to report his crew’s medical assessment to a doctor on the ground that morning, when the doctor told him planes struck the Twin Towers and another hit the Pentagon 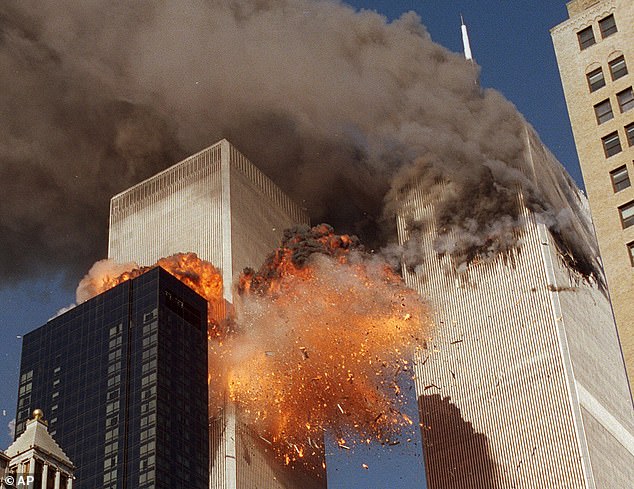 The three astronauts soon realized they were orbiting over Canada and that New York would soon be visible.

At that point, Culbertson said, he rushed into one of the bedrooms ‘and I clearly see the smoke rising out of New York, out over Long Island, over the Atlantic.’

That made it easy to zoom in with his camera, he said, ‘and as I zoomed in a big gray blob enveloped southern Manhattan, and it turned out, I found out later, what I was seeing was the second tower come down.

‘To me it was just explosions. And again, you’re 230 miles above the Earth and traveling at five miles a second, so it’s going away pretty quickly, and I stayed focused on it as long as I could.

‘I made some comments and said some words about bringing these people to justice and how much it hurt me to see my country under attack.’

But soon the image faded away – only to return 90 minutes later as the ISS completed its orbit around the Earth. The astronauts used that time to set up more video and still cameras.

The second time around, Culbertson said, they saw smoke emanating from the Pentagon.

What they didn’t see, though, were most of the planes that usually form a ‘spiderweb over the United States.’

There was one plane he saw flying across the country, he said, that he thought at first must be Air Force One trying to fly the president to safety.

He now believes, though, it was an ‘airborne command post,’ and that other planes that day must have been from the National Airborne Operations Centers.

The next day, Culbertson wrote a letter to his fellow countrymen, that NASA subsequently published.

‘It’s horrible to see smoke pouring from wounds in your own country from such a fantastic vantage point,’ he wrote. ‘The dichotomy of being on a spacecraft dedicated to improving life on the Earth and watching life being destroyed by such willful, terrible acts is jolting to the psyche, no matter who you are.’

He said: ‘It’s difficult to describe how it feels to be the only American completely off the planet at a time such as this. The feeling that I should be there with all of you, dealing with this, helping in some way, is overwhelming.’ 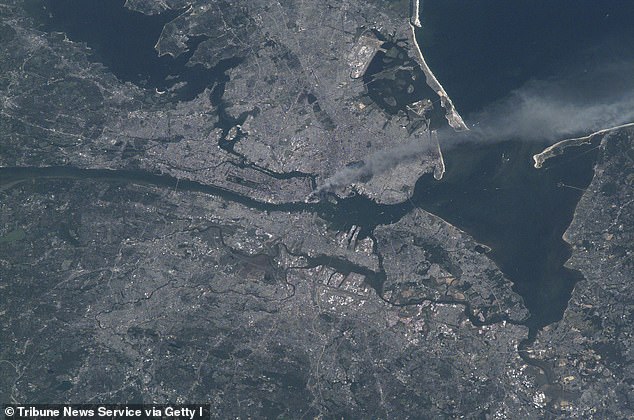 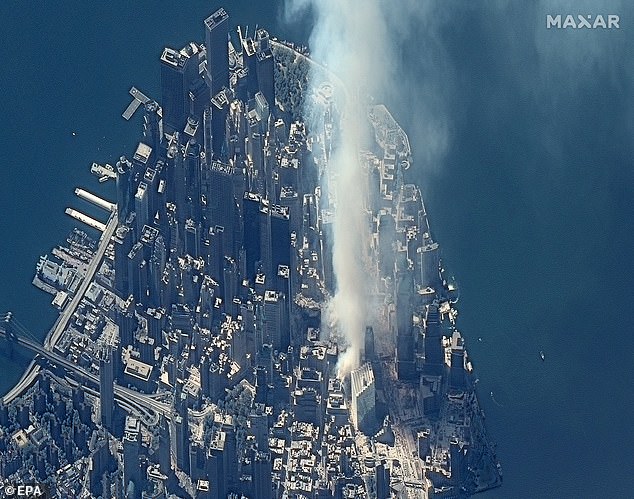 In the days that followed, Culbertson and his crew continued to get sporadic updates from the ground – including one on September 12 that Chic Burlingame, whom Culbertson attended the Naval Academy with, had been the pilot of American Airlines Flight 77, which smashed into the Pentagon.

‘We played the drums and bugle corps together,’ Culbertson wrote at the time. ‘We were both trying to fly the F4 Phantom at the same time, and we’d known each other since 1967. And so it became very personal.’

He responded by playing the Taps bugle call – which signals the end of the day for US military personnel – on a trumpet in a poignant tribute to his friend.

Meanwhile, back on the Earth, many Americans did not know what could come next, so Don Pettit, who was supporting Expedition 3 from the ground, sent him an email about the potential for a ballistic missile attack on the ISS.

‘He sent me an email and said: “Hey Frank, I just want you to know I’ve done the calculations and they actually could hit you with a Scud missile if they got lucky, because they can get to that altitude. It’s not guided, but you know, they might get lucky.”‘

‘And I said: “Thanks for that Don. Thanks a lot for that.” I gave him grief about that when I got back.’

The expedition ended on December 15, leaving the three astronauts on board to experience a whole new Earth.

‘I was prepared for it,’ Culbertson told Cooper. ‘I mean people have been sending me pictures and descriptions of what happened in the days and weeks afterwards, and what changes had been made in security and with the airports, etc. and how a lot of things just weren’t accessible anymore.’

Still, he said: ‘We did come back to a different world, as as we reacclimated and you know, had to travel around the country, around the world for post-flight or to do our business or go anywhere, we saw it clearly. 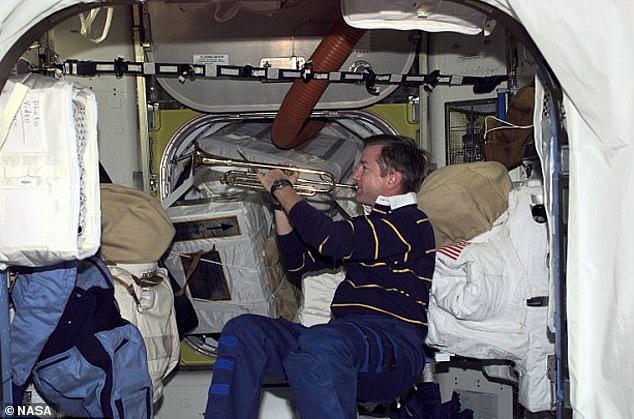 After receiving the news that his friend Chic Burlingame died in the attacks, Culbertson played Taps as a tribute 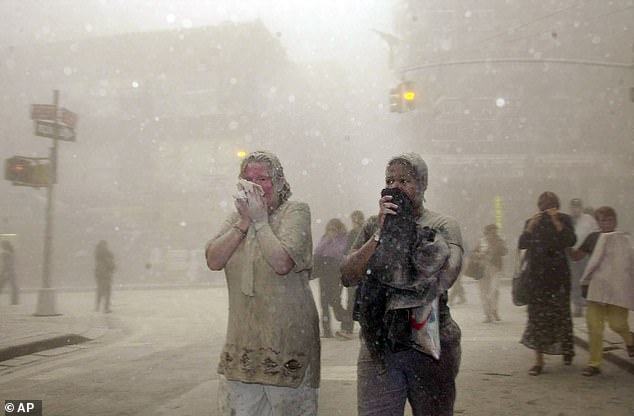 Meanwhile on the ground, people in lower Manhattan had to cover their faces to protect against the smoke coming from the Twin Tower collapse 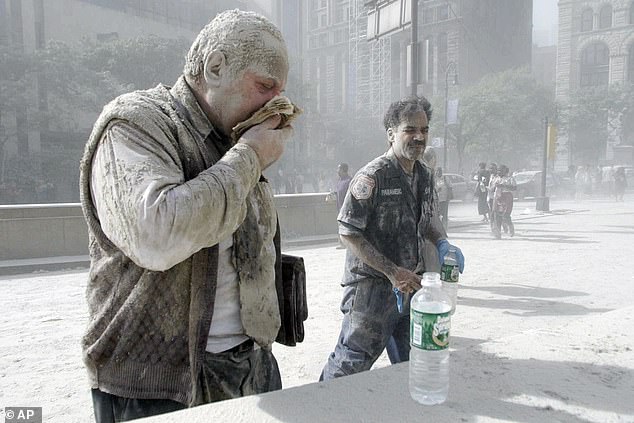 Two decades later, the Taliban has regained control of Afghanistan, after President Joe Biden ordered the swift withdrawal of American troops from the country.

‘The events of this past week in Afghanistan remind us how fragile peace can be and how fragile our nation and civilization and constancy can be, if we don’t maintain security the way we should,’ Culbertson said at the end of the podcast.

‘So I’m concerned about where things are going right now, and whether anything else will happen.

‘We need to value those freedoms, as well as value our security and pay attention as things change around the world,’ he said.

‘By the same token, when you accomplish great things together as international partners, it strengthens all the countries involved and sets a good example for how people should behave.’