New York: A prosecutor says that the man accused of killing eight people at spas in and around Atlanta had targeted some of the victims because they were of Asian descent, and said she was planning to seek the death penalty against him.

The suspect, Robert Aaron Long, 22, who is white, was formally indicted on murder charges on Tuesday, US time, in the four killings at two massage businesses in Atlanta, which shook the country in March amid a wave of anti-Asian hate crimes. 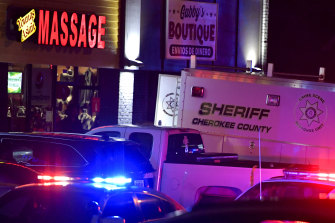 One of the massage parlours where a gunman killed several Korean women in Atlanta.Credit:AP

Grand jurors also indicted Long on one count of domestic terrorism, saying he had intended to “intimidate the civilian population” of Georgia.

Long had already been charged with murder in Cherokee County in four other killings at a spa there less than an hour before the Atlanta attacks. Those victims were Xiaojie “Emily” Tan, 49; Daoyou Feng, 44; Delaina Yaun, 33; and Paul Michels, 54.

In a court filing, Fani Willis, the district attorney in Fulton County, said Long had targeted the four victims in Atlanta, all of whom were women of Asian descent, because of their race, national origin, sex and gender.

The police said after the attacks that Long had told investigators that he had not targeted the victims because of their race. Instead, he claimed to have struggled with a “sex addiction”, they said. The Atlanta police have said that Long was a customer at the two targeted Atlanta businesses, although they have not said that he went there for sex.

All the women killed in Atlanta were employees of the massage businesses there, and all had immigrated from Korea.

Willis filed a notice in court that she would seek hate crime penalties if Long was convicted of murder. Under Georgia law, a prosecutor can ask a jury to determine if a person convicted of an underlying crime is also guilty of a hate crime, which carries an additional penalty.

A lawyer for Long did not immediately return a request for comment.

The attacks began on the evening of March 16, when four people were shot and killed at Young’s Asian Massage in Cherokee County. The gunman also shot another man, who survived.

The charges and the decisions to seek the death penalty and a sentencing enhancement under the hate crime law “send a message that everyone within this community is valued,” Willis said during a news conference.

“Today we have taken another step forward in seeking justice for the victims of this crime and for their family members,” Cherokee County District Attorney Shannon Wallace said in a news release.