This is the first of a series of trial verdicts that could see her imprisoned for the rest of her life.

The 76-year-old Nobel Peace laureate has been held by the Myanmar’s military junta, first under house arrest and more recently in an unknown location in Naypyidaw, since the morning of a February 1 coup launched by army generals to reclaim power in the troubled south-east Asian nation. 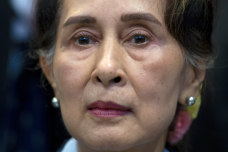 She has been contesting a dozen charges brought against her and in a closed court in the capital on Monday she faced the first verdict of multiple trials that have been running simultaneously.

Suu Kyi received two-year sentences for each of the convictions, as did deposed president Win Myint, who faced the same charges.

But she could be sentenced to more than 100 years in prison if found guilty of all the charges against her, which she denies and which her supporters have slammed as politically motivated and spurious.

They include an obscure allegation of importing walkie-talkies as well as a mounting list of indictments including for electoral fraud, corruption and violating Myanmar’s official secrets act.

The incitement charge for which she was found guilty on Monday was based around an unsigned letter sent by Suu Kyi’s National League for Democracy this year, imploring foreign embassies in Myanmar not to recognise the military government. The charge of breaching pandemic protocols, meanwhile, was imposed in relation to her campaigning before last November’s election, which her party won in a landslide.

While the Tatmadaw, as the military is known, has said she has been afforded due process, her prosecution has been condemned by rights groups for lacking fairness and transparency.

Dr Tun-Aung Shwe, the Australian representative of Myanmar’s shadow administration, the National Unity Government, described the proceedings against Suu Kyi as “show trials” aimed at sidelining her from the political scene once and for all.

“The military think that if they are able to remove Aung San Suu Kyi from the political stage they can win over the anti-coup movement. But their actions will be counterproductive,” said Shwe, whose late father Monywa Tin Shwe was a founding member of the NLD with Suu Kyi and died as a political prisoner in Yangon’s Insein Prison in 1997,

“Their position will fuel the people to fight against the military.”

The country of 54 million has spiralled into chaos since the brutal takeover that ended Myanmar’s brief flirtation with democracy, returning it to the tyrannical hands of the military that has ruled it for most of the seven decades since independence.

More than 1300 people killed in a bloody crackdown against demonstrators and continuing violence, according to the Assistance Association for Political Prisoners monitoring group.

Five more died on Sunday in Yangon, the main city, when security forces reportedly mowed down anti-coup protesters with a car.

Suu Kyi and her Australian economic advisor Sean Turnell are among more than 10,000 to have been arrested and imprisoned since the coup, the monitoring group says.

Turnell, who has been detained since February 6, is himself on trial on charges of breaching Myanmar’s colonial-era official secrets act, allegations that have been denounced as baseless by friends and backers of the Sydney academic.

The Australian government has consistently called for his release, with Foreign Minister Marise Payne saying he had been arbitrarily detained. But he has spent most of this year locked up inside Insein Prison before being transferred to Naypyidaw for his trial.

While many members of Suu Kyi’s former government are in hiding or have fled into exile, Myanmar’s courts have already come down heavily on several of her political associates.

In October, her long-time aide Win Htein was sentenced to 20 years behind bars for treason. In early Nan Khin Htwe Myin, formerly chief minister of Kayin state, was jailed for 75 years and Than Naing, who as state planning minister in Kayin, was imprisoned for 90 years. Both were members of Suu Kyi’s NLD party.

Suu Kyi spent a total of 15 years under house arrest during the Tatmadaw’s previous military rule before being released in 2010.