Singapore: Australia has reaffirmed a joint commitment to fight terrorism with Jakarta as a new report warns pro-Islamic State cells in Indonesia are likely to try and launch attacks of their own in the wake of the deadly airport bombing in Taliban-held Kabul.

A new counter-terrorism pact between the neighbouring countries was announced in Jakarta on Thursday as Foreign Minister Marise Payne and Defence Minister Peter Dutton met with Indonesian counterparts Retno Marsudi and Prabowo Subianto on the first stop of a four-leg overseas tour. 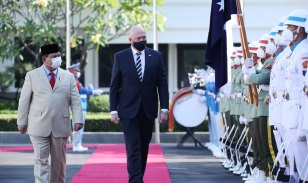 Further enhancing security links, Prabowo revealed the Indonesian armed forces could soon begin training alongside the Australian military in Australia as part of an upgraded bilateral defence deal that has already sent Indonesian cadets to study at the Royal Military College at Duntroon and the Australian Defence Force Academy.

“I think this is a historical first,” the former Indonesian general said. “I think this is important to enhance our cooperation. Indonesia and Australia are important friends and partners in this region, we are close neighbours and we would like to be even closer friends.”

The visit of Payne and Dutton came as Prime Minister Scott Morrison confirmed he expected to a hold face-to-face meeting of the “Quad” alliance in Washington within the next few weeks.

It could give Morrison the first opportunity to have a one-on-one meeting with US President Joe Biden.

Plans to hold a summit of the Quad – which involves Australia, the US, Japan and India – were thrown into doubt by the upcoming Japanese election and the resignation of Japanese Prime Minister Yoshihide Suga. But Suga has confirmed he will visit Washington later this month for the four-way meeting.

In Jakarta, the fallout from the reclaiming of Afghanistan by the Taliban was also on the agenda, with Payne saying Indonesia had an important role to play as the world’s largest Muslim nation in ensuring the new Islamist regime in Kabul respected women and girls.

There are fears the Taliban’s victory – and the terror attack outside Kabul airport that followed it – could inspire a new wave of violent extremism including in south-east Asia.

Indonesian police arrested 58 suspected jihadists in an eight-day spree last month – most of them members of Jemaah Islamiah, the al-Qaeda-linked terror organisation behind the 2002 Bali bombings – and said they had foiled a plot for an attack on Indonesia’s Independence Day on August 17.

A new report from the Jakarta-based Institute for Policy Analysis of Conflict, however, says it is Islamic State supporters in Indonesia that pose more of a threat than JI, which has been decimated by mass arrests and no longer has active links with al-Qaeda.

It was an IS affiliate in Afghanistan -ISIS-K – that claimed responsibility for the Kabul airport suicide bombing that killed more than 90 people including 13 American soldiers last month. There was another attack last week by an IS sympathiser, a Sri Lankan national, in a New Zealand supermarket.

The report said the Kabul airport blast was “likely to inspire ISIS groups to try and mount new attacks in Indonesia”.

“This could lead not to competition between JI and ISIS, which have never been particularly affected by each other’s actions, but to intra-ISIS competition to demonstrate that one particular cell can outdo another,” it said.

“For this reason, ISIS cells remain far more dangerous than anything connected to JI.”

Retno met with Taliban officials during a visit to Qatar a fortnight ago and said on Thursday: “Indonesia hopes that Afghanistan is not used as a breeding and training ground for terrorist organisation and activities that threaten peace and stability in the region.”

Australia’s diplomatic feud with China did not rate a mention on Thursday but Payne, who was later delivering a speech to the Foreign Policy Community of Indonesia think tank, did offer one none-too-subtle reference to the superpower.

“Australia wants to see an Indo-Pacific region that embraces engagement and cooperation but upholds the rights and sovereignty of countries without coercion, regardless of its size and power,” she said.

“To maintain that prosperity and security, we welcome a region that supports a level playing field based on rules and norms to ensure healthy competition, rather than competition that risk sliding into instability or conflict.

“Australia and Indonesia are well-placed to cooperate on this vision.”

Payne and Dutton will also fly to Delhi on Saturday before stops in Seoul and Washington DC.