“Estonia, Latvia and Lithuania and their Allies are working together expeditiously to hand over the security assistance to Ukraine,” the statement said. 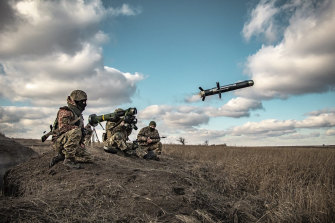 Ukrainian soldiers use a launcher with US Javelin missiles during military exercises in Donetsk region, Ukraine.Credit:AP

The US State Department has cleared Lithuania, Latvia and Estonia to send US-made missiles and other weapons to Ukraine, three sources familiar with the decision said on Wednesday, as US President Joe Biden predicted Russia would move on Ukraine.

Russia has massed tens of thousands of troops on its borders with Ukraine in what Western states fear is the precursor to an assault on the Eastern European country. Russia denies it is planning an attack, but says it could take unspecified military action if a list of its demands is not met.

Ukraine’s Defence Minister Oleksii Reznikov thanked the allies for their support in Kyiv’s standoff with Russia. 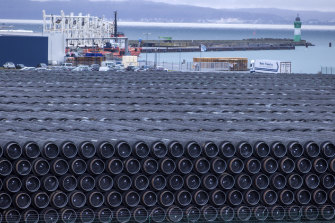 “Partners & friends of Ukraine don’t stay away,” Reznikov said in a tweet.

“A new important decision for the safety of the whole Europe – @StateDept approved for #Lithuania, #Latvia & #Estonia to send American-made weapons to repel attacks and defending Ukraine,” he added.

Germany meanwhile has blocked NATO ally Estonia from giving military support to Ukraine by refusing to issue permits for German-origin weapons to be exported to Kiev, the Wall Street Journal reported on Friday.

Many other NATO allies, including Britain and Poland, also agreed to export weapons directly to Ukraine, but the German government declined to do so.

“Germany has not supported the export of lethal weapons in recent years,” German Chancellor Olaf Scholz told a news conference on Friday.

In the case of Estonia, Berlin is refusing to allow a third country to send artillery to Ukraine because the weaponry originated in Germany, the Journal cited Estonian and German officials as saying.

Germany’s dependence on Russian energy, its trade ties with Russia, as well as the two nation’s World War II history, have made Berlin reluctant to take a confrontational position with Moscow over the future of Ukraine.

Russian pipeline Nord Stream 2, which runs under the Baltic Sea to carry gas to energy-hungry Europe, has been completed and is awaiting approval by German authorities. It is expected to give Russia more economic leverage over Germany once it opens.

A German government spokesperson on Friday denied a report that Chancellor Olaf Scholz had refused an invitation to discuss the Ukraine crisis that came at short notice from US President Joe Biden.

German magazine Der Spiegel reported earlier on Friday that Scholz did not accept the invitation due to a full schedule and the desire to show his presence in Germany as it grapples with the COVID-19 pandemic.

According to the report, both sides hoped to organise a meeting by mid-February.

The top US and Russian diplomats made no major breakthrough at talks on Ukraine on Friday but agreed to keep talking to try to resolve a crisis that has stoked fears of a military conflict.

After the talks in Geneva, US Secretary of State Antony Blinken warned of a “swift, severe” response if Russia invades Ukraine after massing troops near its border. Russian Foreign Minister Sergei Lavrov said Moscow was still waiting for a written response to its demands for security guarantees.

But both said they were open to further dialogue, and Blinken saw grounds to hope that mutual security concerns could be addressed.

“Based on the conversations we’ve had – the extensive conversations – over the past week and today here in Geneva I think there are grounds for and a means to address some of the mutual concerns that we have about security,” Blinken said.

He described the talks as “frank and substantive” and said Russia now faced a choice.

“It can choose the path of diplomacy that can lead to peace and security, or the path that will lead only to conflict, severe consequences and international condemnation,” Blinken told reporters, adding that diplomacy would be preferable.

“We’ve been clear – if any Russian military forces move across Ukraine’s border, that’s a renewed invasion. It will be met with swift, severe and a united response from the United States and our partners and allies.”

Lavrov said the ball was in Washington’s court.

Describing the meeting as open and useful, he said Moscow would understand whether talks were on the right track once it had received a written response to its sweeping security demands from the United States.

Russia’s demands include a halt to NATO’s eastward expansion and a pledge that Ukraine will never be allowed to join the Western military alliance.