A ban on babies in the House of Commons chamber is set to stay after MPs complained they would be ‘disruptive and distracting’.

Following an inquiry, MPs on the procedure committee said they believed ‘members should not bring babies into the Chamber, Westminster Hall or general committees to observe, initiate, speak or intervene in proceedings’.

They said that while the Speaker could decide to allow babies to accompany their mothers in exceptional circumstances, the ‘firm expectation should remain that members do not participate in proceedings while caring for a baby’. 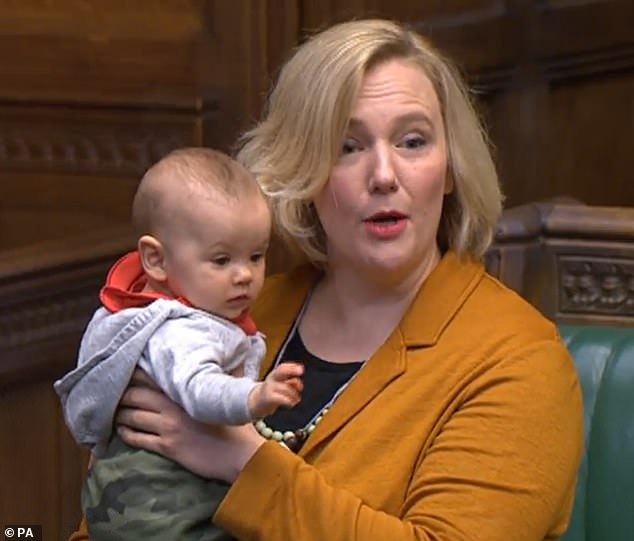 Following an inquiry, MPs on the procedure committee said they believed ‘members should not bring babies into the Chamber’

The recommendation came after Labour MP Stella Creasy was told in November that she could no longer sit in Westminster Hall with her three-month-old son.

This was despite the fact she had taken her son, and before him her daughter, into the Commons chamber regularly.

Last night Miss Creasy said: ‘This committee didn’t speak to a single person outside Parliament despite many of us encouraging them to do so, so I’m not surprised they don’t recognise who is put off Parliament by its antiquated rules and approach to women who have children and the need to modernise.

‘Change will only come when we start listening to those outside the status quo.’

After being asked to investigate the matter by the Speaker, the 17-member cross-party committee decided to recommend that the current rules were retained.

Four MPs told the procedure committee they would be against babies being admitted to the chamber, with only two speaking up in favour.

The matter is likely to be subject to a Commons debate and could be voted on by all MPs.