The BBC weatherman predicted a fresher start to Thursday, with strong winds in parts of the North and Scotland. Cloud will form across some parts of England and Wales and small outbreaks of showers have been predicted in the South. Mr Taylor also predicted that the lowest temperatures will range from between 11C to 13C in the UK.

Mr Taylor said: “The outlook over the next few days is a largely dry one, it will feel colder though out there, particularly by night.

“There is a bit more cloud across England and Wales, and to eastern districts of England, a few showers some of those close to London.

“Isolated showers to the west here and there.

JUST IN: September 15 – On this day: 41 years since Margaret Thatcher’s purge of dissenters 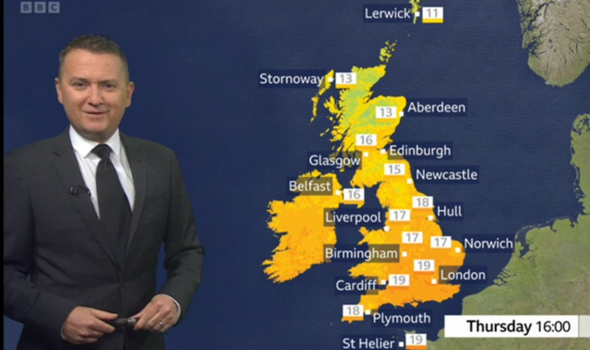 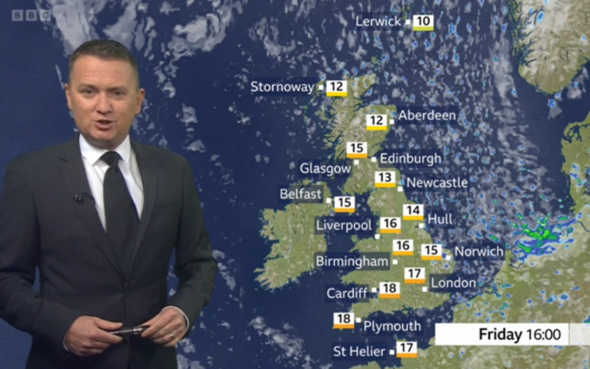 Mr Taylor added: “Many places will get away with a day,  a bit more sun through the afternoon.

“And nice enough when the sun is with you, but with the cloudy moments it will feel cooler than recent days.

“Especially so in Scotland, it’s 11C to 13C here, where tonight it’s going to be a windy night with frequent showers.

“Showers also develop along these North Sea Coasts in England, a few to Wales and the North West of the Midlands.

“And with that in mind, it will be a cooler night, temperatures may be down as low as two or three degrees in some rural parts of Scotland.

“Into Friday we go a lot more sunshine around generally speaking. 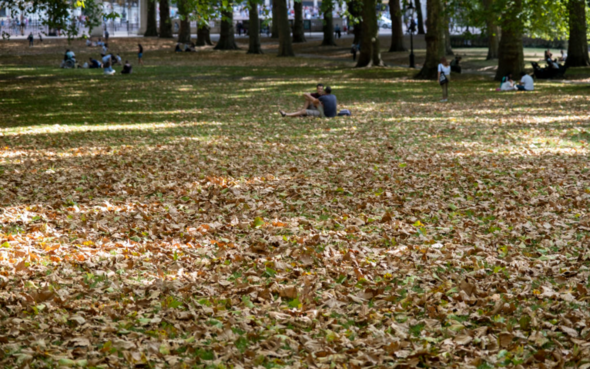 Mr Taylor added: “Frequent showers in Northern Scotland and down these Eastern districts of England.

“Especially close to the coast, where we’ll see strong to maybe even galeforce winds develop.

“Further West the winds are lighter, most places will have a dry and sunny day.

“Pleasent enough for the sunshine here, but feeling rather raw down some of those Eastern coasts compared to what we’ve had all summer long.

“12C to 15C are the highs, a cold start to Saturday and a chilly weekend in store, and a lot of dry weather too.”