Europe is braced for wet and blustery conditions as an Atlantic system sweeps its way across the UK, France and Spain. Bulgaria and Romania have also experienced localised flash flooding, with BBC weather warning of continued showers. BBC weather presenter Louise Lear said: “The driving force for the weather in Europe in the next few days is all coming from the west, from the Atlantic. It’s going to be pretty wet and windy at times with a series of low pressures.

“Now you can see on the satellite picture that first it’s moving its way in through the UK, that’s going to bring some wetter weather eventually across France, down across the Pyrenees and into northern Spain.

“We’ve still got those showers through the Balkans across Bulgaria and Romania, that’s brought some localised flash flooding as well.

“But to the east of that in Turkey and Greece and the Greek isles it’s fine, settled and sunny.

“In fact much of the Mediterranean seeing a good slice of dry weather, not looking too bad as you can see across Portugal and Spain. 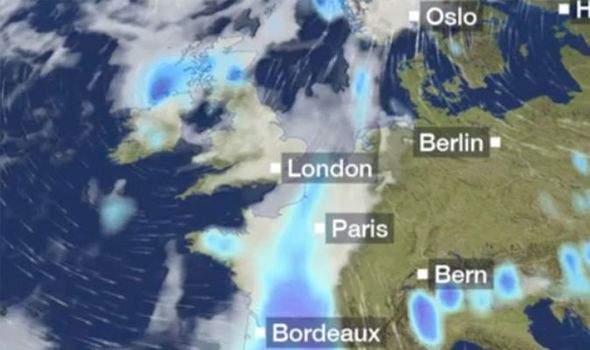 The driving force for the weather in Europe is all coming from the west, from the Atlantic

“There will be a little bit of showery rain into northern Portugal and Spain tied into that low pressure that’s going to move its way through France, it will bring fresher conditions here.

“Breezy with cloud and outbreaks of rain at times across the west coast of Norway.”

Temperatures are a touch cooler than expected for the time of year across the far north-west, but eastern Europe remains mostly dry and sunny.

Forecasting conditions for later into the week, the BBC weather host said: “Now as we move out of Wednesday into Thursday that low eases its way steadily east.

“It’s going to be replaced by another almost in the same spot, again just affecting parts of Portugal to the north and eventually it will drift its way steadily eastwards.

“So an unsettled spell of weather and a little bit cooler than it should be for this time of year across the far north-west, further south it’s fine and settled.

“Temperatures into the low 30s.”