The BBC warned that, though the weather has been “awful” already, it shows no sign of abating. BBC meteorologist Tomasz Schafernaker said: “The weather has been pretty awful in the last couple of days. This low pressure is basically stuck across this part of Europe.

“Nothing is shifting, really.

“The forecast through the early hours of Wednesday shows the heavy rain in place across northern England, the northwest, into Wales as well.

“Not so wet at this stage across the south and we haven’t really had much rainfall so far across Scotland.

“But there is more rain on the way. 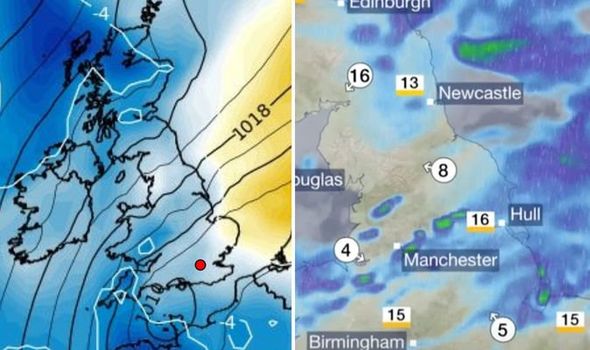 “We’ll see more areas of rain swinging and swirling around.

“Next area of rain moves into East Anglia and Lincolnshire in the second half of the afternoon.

“South of that, some bright weather but also downpours so there could be some torrential thunderstorms here too.

“The rain will turn heavy as we go through the day.

“Across the north we can see those blue colours – very menacing here.

“They’re gathering not just across northern England but nudging into parts of Scotland and Northern Ireland as well.

“On Thursday – you guessed it – that low pressure is still with us.

“Heavy rain across Scotland returning and swirling round into Wales and the southwest.

“And again, there could be some downpours in places – thunder and lightning as well.

“So the unsettled weather is going to continue for as long as this low pressure is stuck over us.

“The weather is essentially going to stay very changeable and wet at times.”