Copenhagen: Ever felt tempted to drift off to sleep in a bed shop?

Customers and employees of an Ikea store in northern Denmark had to do just that when they were stranded by a snowstorm and had to bunk down for the night, sleeping in the beds that are usually on show. 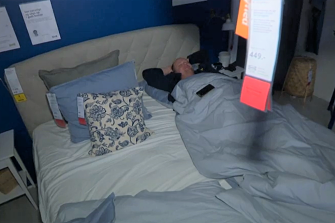 A heavy snowstorm forced customers and staff to sleep at an Ikea store in Denmark.Credit:Screenshot/Nine

Up to 30 centimetres of snow fell, trapping six customers and 25 employees when the store in Aalborg closed on Wednesday evening.

They were served store classics like cinnamon rolls, played cards and watched Christmas shows and sport on the store’s many televisions.

“We slept in the furniture exhibitions and our showroom on the first floor, where we have beds, mattresses and sofa beds,” store manager Peter Elmose told the Ekstra Bladet tabloid. People could “pick the exact bed they always have wanted to try.”

Elmose said it went “super well. It’s been a good night. All fun.”

Denmark’s public broadcaster DR said people working in a toy shop next door also had to spend the night in.

“It’s much better than sleeping in one’s car. It has been nice and warm and we are just happy that they would let us in,” Michelle Barrett, one of the toy shop staff, told DR.

“We just laughed at the situation because we will probably not experience it again,” Barrett added.

Last weekend a group of pubgoers got stranded in a remote English pub after attending an Oasis tribute gig.

Freezing weather and unusually heavy snow has struck the UK and parts of Europe in the last 10 days.