Beirut blast: Tracing the explosives that tore the capital apart

Beirut, Lebanon – It was only after a massive explosion ripped through Beirut that most people in Lebanon learned about the 2,750 tonnes of ammonium nitrate stored in a hangar at the city’s port.

The detonation of the material – used in bombs and fertilisers – sent shockwaves through the Lebanese capital, killing scores of people, injuring thousands, and leaving much of the city a mangled mess.

In the explosion’s devastating aftermath, many Lebanese are expressing immense shock and sadness at the destruction, and great anger towards those who allowed this to happen.

Analysis of public records and documents published online show senior Lebanese officials knew for more than six years that the ammonium nitrate was stored in Hangar 12 of Beirut’s port.

And they were well aware of the dangers it posed.

So how did this happen? Here’s what we know so far.

The cargo of ammonium nitrate arrived in Lebanon in September 2013, on board a Russian-owned cargo vessel flying a Moldovan Flag. The Rhosus, according to information from the ship-tracking site, Fleetmon, was heading from Georgia to Mozambique.

It was forced to dock in Beirut after facing technical problems at sea, according to (PDF) lawyers representing the boat’s crew. But Lebanese officials prevented the vessel from sailing, and eventually, it was abandoned by its owners and crew – information partially corroborated by Fleetmon.

The ship’s dangerous cargo was then offloaded and placed in Hangar 12 of Beirut port, a large grey structure facing the country’s main north-south highway at the main entrance to the capital.

Months later, on June 27, 2014, then-director of Lebanese Customs Shafik Merhi sent a letter addressed to an unnamed “Urgent Matters judge”, asking for a solution to the cargo, according to documents shared online.

They proposed three options: Export the ammonium nitrate, hand it over to the Lebanese Army, or sell it to the privately-owned Lebanese Explosives Company.

One letter sent in 2016 noted there had been “no reply” from judges to previous requests.

It pleaded: “In view of the serious danger of keeping these goods in the hangar in unsuitable climatic conditions, we reaffirm our request to please request the marine agency to re-export these goods immediately to preserve the safety of the port and those working in it, or to look into agreeing to sell this amount” to the Lebanese Explosives Company.

Again, there was no reply.

A year later, Daher, the new Lebanese Customs director, wrote to a judge once again.

In the October 27, 2017, letter, Daher urged the judge to come to a decision on the matter in view of “the danger … of leaving these goods in the place they are, and to those working there”.

Nearly three years later, the ammonium nitrate was still in the hangar. 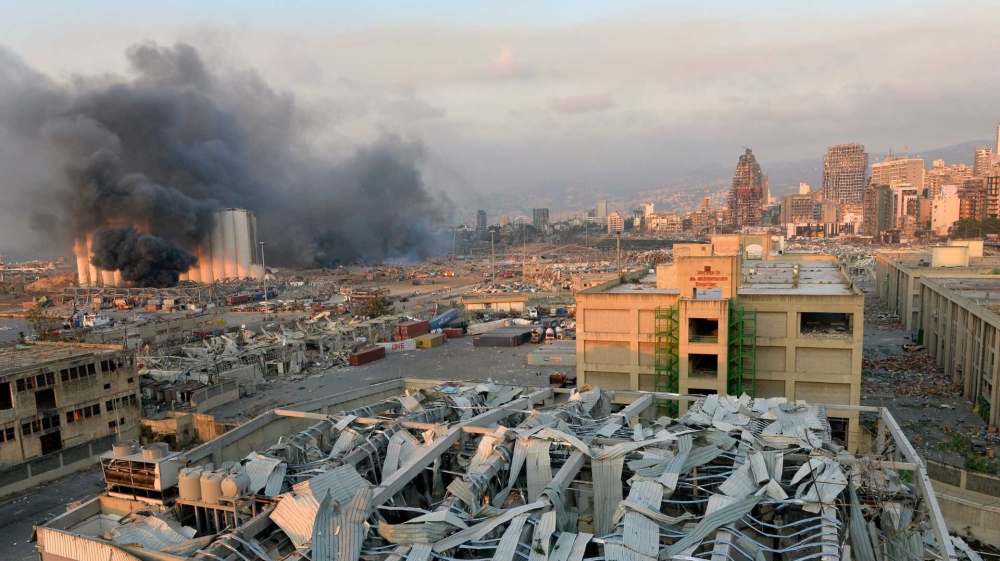 Lebanon’s Prime Minister Hassan Diab on Tuesday declared the explosion at the port a “great national disaster” and promised that “all those responsible for this catastrophe will pay the price”.

Lebanese President Michel Aoun called the failure to deal with the ammonium nitrate “unacceptable” and vowed the “harshest punishment” for those responsible. An investigation has now been launched, and the committee is to refer its findings to the judiciary within five days.

The cause of the explosion is still not clear, but many Lebanese were quick to point out what they believe to be the root causes; immense mismanagement in a broken state run by a corrupt political class who they say treat the country’s inhabitants with contempt.

“I don’t want to die” a young girl screams as the blast hits. Those responsible for this must pay. pic.twitter.com/yTyCaoPtvc

It is also not lost on Beirut’s residents that this tragedy emanated from the city’s port, a public utility known locally as the “Cave of Ali Baba and the 40 Thieves” for the vast amount of state funds that have reportedly been stolen there over the decades.

The allegations include claims that billions of dollars in tax revenue never reached the state treasury due to schemes to undervalue imports, as well as accusations of systematic and widespread bribery to avoid paying customs taxes.

“Beirut is gone and those who ruled this country for the past decades cannot get away with this,” Rima Majed, a Lebanese political activist and sociologist said in a tweet.

“They are criminals and this is probably the biggest of their (too many) crimes so far.”