United Nation: The main opposition challenger in Belarus' disputed presidential election, which has triggered mass protests, will address an informal meeting of the UN Security Council on Friday.

Estonia’s UN ambassador, Sven Jurgenson, said on Tuesday that Sviatlana Tsikhanouskaya, who fled to Lithuania under pressure from Belarus authorities, will speak to the UN’s most powerful body at a meeting focusing on attacks on human rights in the former Soviet nation. 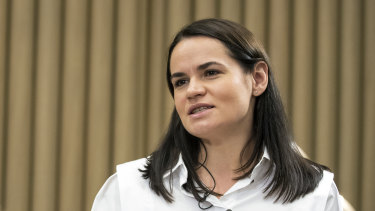 Sviatlana Tsikhanouskaya, former candidate for the Belarus’ presidential elections will speak to a meeting of the UN Security Council.Credit:AP

Belarus’ opposition has called the August 9 election that gave Alexander Lukashenko a sixth term as president rigged. The United States and European Union have criticised the vote it as neither free nor fair and urged Belarusian authorities to begin a dialogue with the opposition.

Lukashenko, who has run the nation of 9.5 million people with an iron fist for 26 years, has dismissed opposition protesters as Western puppets and is pursuing a tough response to demonstrators. Over the weekend, he cracked down on independent media and his government has been jailing activists.

Jürgenson, whose country is serving a two-year term on the Security Council, said the expulsion of independent foreign media and revocation of accreditation for independent journalists in Belarus “confirms the importance of sharing information about what is happening in Belarus.”

“For Estonia, standing up for human rights is also a priority in foreign policy, which is why we consider it important to provide an arena for those whose voices are being suppressed,” he said in a statement to The Associated Press. 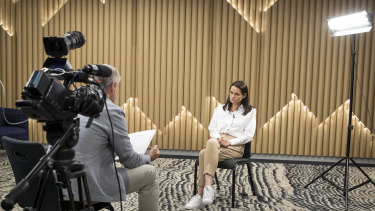 Sviatlana Tsikhanouskaya, former candidate for the Belarus’ presidential elections listens to a question, fled to Lithuania under pressure from Belarus authorities.Credit:AP

Jürgenson said the Security Council has stated that severe human rights violations are an early warning of conflicts with international implications and that “repression could amount to threats to international peace and security.”

“Prevention of violent conflict and mass atrocities is the council´s key responsibility, thus early warning and awareness raising are necessary,” he said.

The US is considering imposing sanctions on seven Belarusians it believes were involved in falsifying the results of the August 9 election and in violence against peaceful protesters, a senior State Department official said on Tuesday.

The official, who spoke on condition of anonymity, said the US could consider imposing sanctions on Russia if it were to intervene overtly with force in Belarus, where protests erupted after the election. 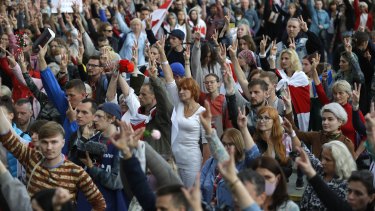 Protesters shout as they are blocked by a police line toward Independence Square in Minsk, Belarus in late August.Credit:AP

The official provided the most detailed description to date of US Deputy Secretary of State Stephen Biegun's talks in Moscow last week, in which he warned senior Russian officials against the overt use of force in Belarus, which is sandwiched between Russia and the NATO Western security alliance.

Russian President Vladimir Putin last week said he had set up a reserve police force to support Lukashenko if necessary but he saw no need to deploy them for now.

A former Soviet republic, Belarus maintains close political, economic and cultural ties to Russia and belongs to a Russia-led military alliance. The two are also joined by a treaty that, at least on paper, proclaims a "union state," which Putin has sought to develop into more of a political and economic reality.