When Queen Elizabeth II made her first visit to Melbourne in 1954, nearly a million people lined the streets from Essendon airport where her plane landed, all the way to Government House where she was officially welcomed. She was the first monarch to visit the city, which may go some way to explaining the front-page story the next day in The Age, which began with the line: ”Melbourne had the greatest day in its history yesterday.”

Not only Melbourne, but the nation was enthralled by the young monarch. It was estimated that 6 million of the Australian population of 9 million saw the Queen and the Duke of Edinburgh during that tour, which took in seven capital cities and 70 towns in a gruelling 58 days. 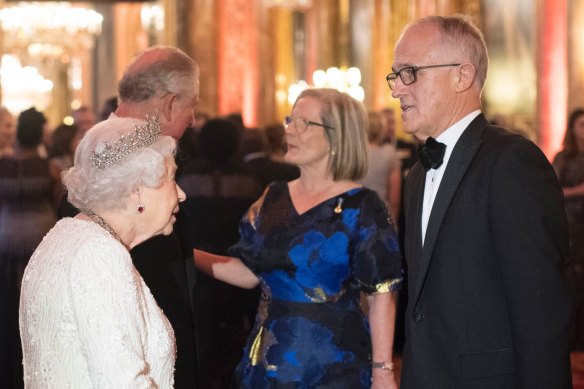 As then prime minister Robert Menzies wrote: “To me, one of the most remarkably significant things about the Crown is that whereas for centuries it existed by power, because it had power, today it exists not because it has power in the legal sense but because it has achieved a new authority over the hearts and minds of our people.”

By the time the young Elizabeth came to the throne, Britain was losing most of the power it had achieved through conquest. World War II heralded the end of the British empire – a war about which Menzies later wrote “neutrality for Australia in a British war was unthinkable”. Two years after it ended, India, the so-called jewel in the crown, achieved independence as part of a wider global unravelling of 19th century imperialism.

But Elizabeth’s accession to the throne carved a new cultural power from this decline. The well-travelled young royal family became glamorous global figures, pioneers of the new medium of TV. Elizabeth moved between the high pomp of her coronation and reception centres and meet-and-greets in every corner of the Commonwealth. In doing so, she helped that small green island off Europe retain enduring international cache.

Negotiating these profound shifts took skill and dedication. The Queen was committed in public to the aloofness, formality and pageantry of her role, and her personal behaviour was beyond reproach and rarely tainted by scandal. The main exception was her initial indifference to the public need for a response after the death of Princess Diana. The tens, or hundreds, of thousands of ordinary people who met her found her patient and engaging. When trouble struck, she was stoic, even when her own family was falling into disarray, or the wider political sphere seemed chaotic. As 15 British prime ministers came and went, she remained steadfast.

In private, many spoke of her endearing side. Former prime minister Malcolm Turnbull, an avowed republican who might not be expected to wax lyrical about the monarchy, told of how the Queen was “very, very charming, alert, gracious, generous and just totally devoted to her job, to her service”. While the Queen was largely known to remain reticent in public, Turnbull described how, behind closed doors, “she wanted to not simply share her views but in particular draw out from me – and when Lucy joined us, from Lucy – what we thought about the issue she was interested in”.

She could also be funny. The Paddington Bear video released at the time of her jubilee gave a glimpse of what confidantes say was a quick wit and a lively sense of humour.

Elizabeth’s legacy is a remarkable one, but she was not always destined to be queen. It was only at the age of 10 when her uncle, King Edward VIII, abdicated to marry an American divorcee that her father became king, and she his heir. Without that, the world would not have had a second Queen Elizabeth, and she would have enjoyed the more frivolous life of a “minor royal”.

She was touring in Kenya in 1952 with her husband, Philip, when her beloved father died in his sleep at Sandringham. When, a day later, the 25-year-old monarch arrived in London, dressed in black, she was greeted by prime minister Winston Churchill. For the next 60 years, she, in the words of the British (and formerly Australian) national anthem, was “long to reign over us”.

Her death and the accession to the throne of King Charles III will inevitably spark speculation over the monarchy’s long-term future and, in Australia, discussion about whether it is time to become a republic. While The Age has long supported a transition to a republic, now is a time for reflection and mourning.

In her accession declaration in 1952, Elizabeth said: “I pray that God will help me to discharge worthily this heavy task that has been laid upon me so early in my life.” Whether it was by God or her own great talent, charm and determination, those early prayers were answered.

You are now relieved of your heavy task, Ma’am. The world will not be the same without you.

Gay Alcorn sends an exclusive newsletter to subscribers each week. Sign up to receive her Note from the Editor.